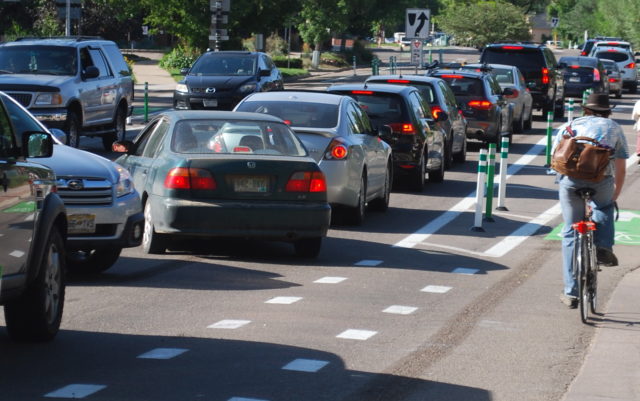 Transportation contributes about 25 percent to all greenhouse gas emissions in the United States every year. Thus, reevaluating how you get around town can have a major impact on your carbon footprint.

Luckily, the City and County of Boulder understand the importance of offering viable alternatives to the one-person, one-car model. With rebate initiatives and strategic planning, local leaders have made it a point to make walking, biking, using public transportation and driving alternative fuel vehicles easier for the folks who live and work in Boulder County.

Furthermore, entrepreneurs in the County and along the Front Range are working to develop technologies that make alternative modes of transportation easier, and cheaper, for people.

Here’s a brief look at the way community officials are working to make transportation easier for people in Boulder County, and what could be in store for future commuters.

Walking is the commuting method of choice for more people than you may think. About 10 percent of Boulderites use the sidewalks to get to work every day. That commitment earned Boulder a gold-level Walk Friendly Community honor, which has only been bestowed on 12 other communities in the country.

So what makes walking in Boulder viable? It starts with a planning commitment — the no-car Pearl Street mall not only acts as the heart of Boulder, but as a signal that the city is committed to outdoor, pedestrian-friendly activities. The city’s extensive network of multi-use paths and hiking trails also means those in Boulder can get almost anywhere on foot — and 90 percent of bus stops are accessible from walking paths via wheelchair.

And since 2005, the City of Boulder has been awarded more than
$1 million in Safe Routes to School program funding, which is used to build paths and improve sidewalks in order to encourage more students to walk to school.

According to Boulder’s 2014 Transportation Master Plan, 55 new underpasses, 60 enhanced pedestrian crossings and nine miles of pedestrian facilities will be added to the City’s infrastructure.

It’s often said that there are more bikes in Boulder than cars. There’s little data to prove the point, but one need only look to their nearest bike path (which is probably pretty near) and see the bevy of cyclists to be convinced.

To be sure, bike riding is central to Boulder’s identity. Whether it’s road cyclists out for a time trial, mountain bikers thumping through hills on a dirt trail or commuters pedaling their way to work, bikes are literally the engine that makes this town, and county, tick.

That said, there are a number of things the City has done to improve the quality of cycling in town. There are 300 miles of dedicated bikeways in Boulder. There are bike-only lanes on main streets, some of which are
cordoned off with protective posts. There are off-street bikeways, which often include alternating flows of traffic. And there are bike routes, which, when lanes and paths aren’t available, direct cyclists to roads with less traffic to maximize safety.

Don’t have a bike? Or, don’t have yours with you? No worries. With Boulder’s B-cycle program, you can rent one of 300 bikes at any of the city’s 43 stations for short trips. It only costs $8 for 24 hours with major discounts for monthly and annual passes.

Electric bicycles are allowed on certain paths in Boulder, and represent one of the most exciting trends in alternative transportation. Via pedal assist, e-bikes take the edge off long commutes, steep hills and headwinds, allowing the rider to press a button and lessen the load of pedaling. At the end of the day, a removable battery can be recharged for the next trip. Up until the end of September 2017, the County assisted riders with discounts on e-bike purchases, so check back for future rebate programs. In the meantime there are numerous shops to try out e-bikes throughout the county.

Despite not having a train or trolley, Boulder’s public transportation
system gets most consumers where they need to go. RTD operates a system of buses that takes people throughout the city, into East County and Denver, and to the airport.

The EcoPass program provides people in select communities the opportunity to have unlimited rides on the RTD bus system. Currently, only neighborhoods and businesses can participate in the program, and those entities are subsidized by the City to run those programs.

There are riding options outside the bus, however. The organization Way To Go also provides easy carpooling solutions for Denver metro riders. Too, Uber and Lyft have made recent pushes to enhance their ride-sharing availability in Boulder County.

If all else fails, hold your breath for the Hyperloop. In September 2017, the Colorado Department of Transportation partnered with tech company Hyperloop One and AECOM to begin a feasibility study for a high-speed train to the Front Range, with stops between Pueblo and Cheyenne. Given a nod of approval the Front Range proposal would feature passengers loaded into a pod and propelled via electric rail through a low-pressure tube. Sounds fun.

Of course, there are times when you must drive. Luckily, there are ways to get your hands on electric and hybrid vehicles at a discount.

Colorado residents are entitled to a $5,000 tax credit, in addition to a $7,500 federal tax credit, when they purchase an electric vehicle. That’s a massive incentive to go green with your vehicle, knocking up to 40 percent off the purchase price.

If buying a car isn’t in the books for you, try ride-share programs like eGo Car Share (see page 13), which gives people access to an eco-friendly car without having to shoulder the cost of buying one.

And if all else fails, just drive less!