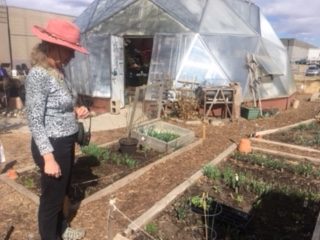 One day before the spring equinox, a substitute teacher and 25 sixth-graders from Longmont’s Flagstaff Academy file out to the school’s garden area for their bi-weekly class with school garden teacher Allison Cole.

“Let’s form a circle around the sundial,” she says. Students jostle for positions on a concrete pad where Cole holds a globe. On the ground, students had previously marked the progression of the sun’s shadow during the winter solstice. Cole asks a student to put his finger on the top of the sundial so that others can mark where its shadow falls on this day. Students note the differences between the winter, spring and summer sun and how that relates to the globe and seasons.

Cole instructs students to illustrate the three different progressions of the sun’s shadow, and students file into an adjacent 25-foot-wide geodesic greenhouse filled with seedlings, houseplants and moist, warm air to complete their drawings. Once they’ve finished, they proceed back outside to the vegetable area where they work on resetting stones that encase the raised vegetable beds.

Cole was hired as the school’s full-time garden teacher five years ago. She develops her lesson plans around each grade’s curriculum. “Sixth grade is doing astronomy right now,” she says, hence the lesson about the sun.

Cole points out some of the other areas of the garden. “That’s a cover crop of rye,” she says. “A group was studying soil.” Just beyond that bed, another area is filled with dry, bent-over native grasses. “The (younger) kids were like buffalo one day. They went in there and stomped it down,” explains Cole.

“A few people had the vision that as a science and technology school, we needed to have some structured garden activities,” she says. “The program is more about science than it is about gardening.” Parents fundraised for and then assembled the greenhouse; the garden area has an annual maintenance budget of about $1,000. Additionally, Cole says the school provides for some structural improvements each year. This year, they are funding a drip irrigation plan that middle schoolers developed.

Northwest of Longmont, Principal Andrew Moore, former principal at Flagstaff, brings planning experience to his new role as gardener-in-chief at Lyons Elementary School. “You have to have a system and structure if you want it to last,” he says. Teachers wanted a garden. The question was “how do we imbed garden curriculum into the (academic) curriculum?”

Like Flagstaff, the solution was to match the monthly garden activities with the subjects that each grade level studies. For example, each December, fifth-graders start planning budgets, writing grants and procuring seeds. In February, first-graders start seedlings. In April, another grade level begins direct sowing of seeds outdoors, while another grade begins setting out transplants in May.

The Lyons garden sits in a central courtyard surrounded by the school. “You can see it from the hallways,” Moore says. “Everyone walks past it a dozen times a day.” Moore is perhaps most proud of the community service aspects of his school’s garden. “We’re calling it a production garden,” he says. “All the food goes to the local food bank.”

By focusing on a half dozen high-yield crops such as tomatoes, peppers, cucumbers and winter squash, the school donated over 300 pounds of food last year, he says. The school Eco-Club weighs and delivers the weekly harvest to the food bank. The garden also depends on summer volunteers, local senior citizen master gardeners and grants from the Lyons Community Foundation to build infrastructure. “This year we’re putting in bees,” Moore says.

Any Colorado gardener is familiar with how extreme variations of hot and cold weather, lack of dependable precipitation, hail storms, early or late frosts, clay soils and more can make gardening challenging. School gardeners face those issues, plus additional obstacles. Imagine gardening by committee, or having 25 to 50 kids trample and pull seedlings that a previous class has just planted. Plus, your labor force has the entire summer off.

Julie Wallace, seventh-grade language arts teacher at Trail Ridge Middle School in Longmont, recounts some of the hurdles that she and her teammates encountered in trying to start the garden. “We had to go through so much red tape getting it approved with changing the grounds and the irrigation. After that was the planning,” she recalls. “There are so many chefs in the kitchen.

Trail Ridge has now had both a flowering pollinator garden and a vegetable garden for three years.

Apart from teachers not always having the background knowledge of what to do, “You have to take risks in letting the kids make decisions,” Wallace says. Despite all of that, perhaps her biggest hurdle is convincing people that students are actually learning through the garden activities.

Seventh-grade teachers decided to involve students in the creation of a garden learning area after watching their students become increasingly engaged with their iPads, cell phones and video games rather than with the activities at school and with each other. When the school adopted a STEM (Science, Technology, Engineering and Math) focus, other grade teams began delving into technology, but Wallace and her team wanted to get students outside to apply their classroom learning in a garden area.

After reading Richard Louv’s Last Child in the Woods: Saving Our Children from Nature-Deficit Disorder, seventh-grade teachers were convinced that the garden was just the prescription their students needed. Wallace recounts a lesson from a novel called Seed Folks that she read with her students as they were developing the garden. “They saw the value of a garden and how it connected people. It’s not just about growing green chiles. It’s about the circle of life,” she says.

Kirsten Bell, who teaches a professional development class on starting school gardens for the Denver Botanic Gardens, says that most teachers would like to have a garden at their school. Some teachers taking her class have a school garden but don’t know what to do with it, while others have some skills but their schools do not yet have a garden and they don’t know how to get started.

“The biggest obstacle, once you’ve gotten it cleared with administration, is the space — finding the best location for the garden,” she says. “It’s not like your own personal garden, where you can put it wherever you like.” Another obstacle is the school calendar. “We’ve suggested planting a spring garden or a fall garden,” she says. Bell suggests schools could now begin sowing quick-growing vegetables like radishes, onions and greens that students could harvest prior to the end of the school year while a fall garden could include spinach, bulbs and garlic. As part of best practices, Bell also recommends a school garden coordinator, all so that students can reap the benefits of being outdoors.

“There are beneficial effects of having plants in the classroom. That’s compounded when going outside,” she says.

Some of the benefits of students having access to school gardens and plants in the classroom include improved test scores, improved well-being, sense of ownership and improved health that comes along with healthy eating, she says.

On the outskirts of Longmont, eighth-grade science teacher Dan Cribby describes how Westview Middle School was designed to include an outdoor learning area when it was built 25 years ago. “It was on the initial plan,” he says. “I think we have 25 acres with about 300 to 400 trees.”

Currently Cribby, who has worked at the school for nine years, and his STEM students, who have been with him since sixth grade, are developing a plan to turn the school’s unused tennis courts into an outdoor learning area. “We’re in the very early stages,” he says. “They (students) are going through the design process.” Right now, they’re proposing to dig up and mill the old asphalt from the courts so that it can be used to create new pathways throughout the space.  “It doesn’t matter what content your teaching,” when students are studying a problem, then proposing and testing potential solution Cribby says.

Meanwhile, students in his after-school environmental club have become the coaches of the younger students. “That allows it to have the continuity,” says Cribby.

It’s about the circle of life, indeed.