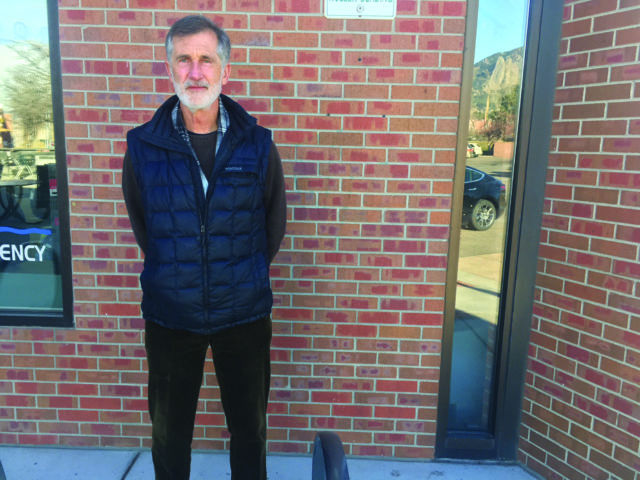 While he was walking to volunteer at a soup kitchen in Denver a few years ago, Phil Barber ran into one of his first pro bono immigration clients. Barber had helped him and his wife, who were originally from Mexico, avoid deportation.

Barber learned that in the time since he represented the couple, their two sons had both gotten engaged. And they had had a daughter. The man then invited Barber to her quinceañera.

“That was one of those footnotes that you see, ‘Oh, this is real life stuff,’” Barber says, choking back tears.

A graduate of CU-Boulder, Barber has been a lawyer for some 40 years, mainly representing communities that are trying to regulate oil and gas operations and some individuals that are owed money by oil companies. He’s represented Longmont, Boulder and Broomfield in their efforts to limit and/or ban fracking.

For the last 20 years, however, Barber has also been taking pro bono immigration cases on the side, helping dozens of individuals and families work their way through the complicated immigration system.

He first started working with immigrant clients through a group in Denver called the Thursday Night Bar that provided lawyers with pro bono opportunities in a variety of fields from criminal defense to domestic violence, traffic violations and immigration cases. Despite the fact he knew very little about that particular area of law, Barber represented a dozen clients fighting deportation over the next decade or so. In the last seven years he’s mainly focused on asylum cases referred to him by the Rocky Mountain Immigrant Advocacy Network (RMIAN), a nonprofit organization based in Westminster that provides pro bono services and legal orientation to detained immigrants.

Even after two decades, Barber says he’s “still getting up to speed” on immigration law.

“When you’re a volunteer lawyer in an area that you know nothing about, you’re taking a chance and your client is taking a chance,” Barber says. But, “by hook and by crook, you learn as you go along and you use your training as a lawyer and as a human being to spot the likely important issues in the case.”

Working with RMIAN has made the work easier, at least logistically, as the organization can set up a pro bono lawyer with a case memo, mentors, a list of expert witnesses and even direct them to the area of immigration law that may be applicable. Barber takes on an average of one to two cases a year, each asylum case taking anywhere from 100 to 200 hours. His clients come from a variety of countries around the world, each case requiring him to learn the political, social and religious nuances of each place.

There were two clients from Eritrea, he says, who were locked in underground caverns for years simply because they wanted to practice their religion. There was the Coptic Christian from Egypt who fled persecution by the Muslim Brotherhood after his shop was burned down. And there was Luis, whose name is Michelle now, from Mexico. Raised in poverty, she fled home, only to end up in Tijuana, beaten, raped and forced into sex slavery all because she’s transgender.

“They didn’t do anything to deserve any of that,” Barber says of his clients. “Those are the kinds of cases, though, that make you hopeful. People can be incredibly resilient and resourceful.”

Barber says he typically gets a two- or three-hour hearing to elicit a compelling story from his client on the witness stand, and corroborate that story with letters from friends and family in their country of origin as well as testimony from expert witnesses (most of whom offer their services for free or at a reduced rate as well).

“Trying a case in immigration court, it’s like trying a death penalty case in traffic court,” he says. “The law is extremely difficult and it’s unimaginable to me that a person would be able to navigate it without a lawyer. But you know, immigrants are very, very resourceful and their lives are at stake and their families are depending on them, so historically in this country, some of them have found a way to make it.”

Barber attributes his altruistic orientation to his parents and the way he was raised.

Born in Wyoming, Barber moved to Pueblo — “really a melting pot of people, to borrow a cliché,” he says — when he was 3 years old. In 1967, his dad led an effort to integrate the Methodist church by merging with a local African American congregation.

“It’s been my lineage to do this kind of thing,” he says. “I’ll keep doing this for as long as I can.”

Over the years, Barber has been largely successful — his clients receive asylum, mostly move to other parts of the country where they have community and friends, and begin to rebuild their lives.

“There is no feeling like walking out of an immigration court with your client who’s been in prison for the last year, who’s been granted asylum,” he says. “I mean, that’s about as high a feeling as I’ve ever had as a lawyer. It can be extremely gratifying.”

About a month ago was the first time in 20 years that Barber wasn’t successful in an immigration case, representing a mother from Mexico with four kids, who fears for her children’s safety if she was forced to return. He’s offered to handle her appeal, but he knows it’s an uphill battle. “I’m just trying to buy her a little more time,” he says.

“There but for the grace of God, go I,” he continues, “because it really is just a question of where you were born and who you are that puts these folks in those situations. Nobody chooses to be a refugee … We can debate about a lot of things, but there aren’t many people who would choose to leave their home if they had a decent choice.”

Representing immigrants has gotten harder in the last few years, under the Trump administration, Barber admits. The need has become more overwhelming, the government much more adversarial, people are held in detention for longer, the courts’ interpretation of immigration law has narrowed. But all of this only reinforces Barber’s determination to continue to take on clients and advocate for organizations like RMIAN.

Correction: This story mistakenly stated that Barber works with Colorado Rising in the lawsuit to reinstate the city’s fracking ban. He represents Longmont in the case. We apologize for the confusion.