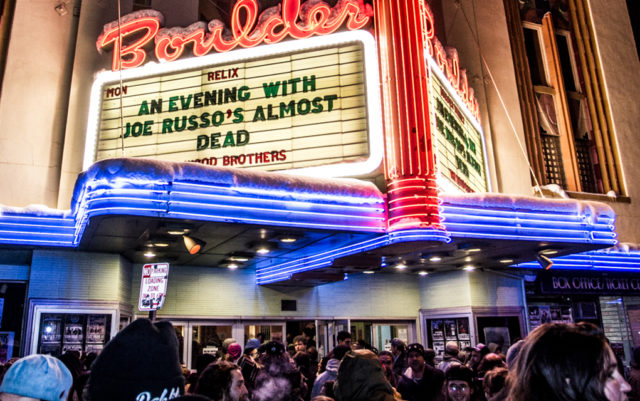 Boulder is home to a thriving music scene filled with established performers and up-and-coming acts who thrill audiences with spectacular live shows. Our city boasts a venerable list of venues that host music to suit every palate. With University of Colorado students shuffling through and a hearty base of young people moving in, it’s no wonder Boulder has supported more than a few top music acts.

CU senior Haasini Ravisankar works as the assistant to talent buyers for Z2 Entertainment, a booking agency for venues around Boulder and Colorado. Ravisankar grew up in Boulder going to concerts, and when she entered college and talked to students from out of state, she says they seemed surprised at Boulder’s vibrant music scene.

“Going to [see live] music is one of the main things you can really do in Boulder. The nightlife scene here is big, but I think music is what’s really central to every college kid,” she says. “I’ve noticed that [at CU] more so than any other group I’ve been around. Everyone’s obsessed with shows and interesting music. It plays a huge part of people’s lives here.”

Music lovers have a lot of options for music around town, including Z2’s main stages: Fox Theatre, Boulder Theater and Chautauqua Auditorium. Then there’s the nationally syndicated radio show/multimedia event company eTown, which not only hosts live shows in its eTown Hall but also conducts in-depth interviews with musicians and environmentalists. The Laughing Goat and Rayback Collective provide great spaces for up-and-coming acts. The CU campus puts on multiple shows throughout the year thanks to Program Council, a student group responsible for putting on entertainment. Plus, drive down U.S. 36 a bit and you’ll find the 1stBank Center, an arena that hosts major musical acts throughout the year.

One of the most popular destinations for college students is located only a few steps away from campus. Situated on the Hill, Fox Theatre is an iconic Boulder venue, voted fourth on Rolling Stone’s list of the best clubs in America.

“My favorite thing about the Fox is that I just feel like I’m at a really warm, welcoming house party,” Ravisankar says. “And at the same time you’re seeing the really top-of-the-line artists that are relevant nationwide, or even locally. It feels super homey but you’re seeing top-quality acts.”

Almost acting as a big brother for the Fox, the Boulder Theater on 14th Street is a Boulder staple in its own right. Opened in 1906, Boulder Theater is a designated Colorado historical landmark, and each year the theater hosts some of the biggest names in music. While the Fox features a lively, club-like vibe, Ravisankar says, the Boulder Theater has a regal and refined atmosphere.

The wide spectrum of offerings is a result of an engaged listening community, says the Z2 team. Between the venues, there’s a wide breadth of acts to book.

“It’s really diverse, which is great, because you’re not pigeon-holed into one thing,” Weingarden says. “It’s not just all EDM or all hip-hop. It’s great because everyone’s a music fan”

“[Boulder] has a pretty high music IQ,” continues Joe Golaszewski, talent buyer for Z2. “People that live in Boulder see a lot of music. They pay attention to music. They explore different types of music. …

Catering to an audience of smart music lovers is also a priority for Taylor Denn, eTown’s talent coordinator. Founded in the early ’90s as a nonprofit, eTown is a nationally syndicated radio program and multimedia event company that broadcasts its events to more than 300 stations. The company found its current home venue on Spruce Street in 2008 after years of broadcasting its program from the Boulder Theater.

“Music has become so emulated because there’s so much of it out there,” he says. “It’s so hard to be original. I try to find people who have their own sound.”

In the past, eTown has welcomed such diverse artists as Atmosphere, Tegan and Sara, the Flobots, Brother Ali, Michael Franti, Bob Weir and Jack Johnson. Denn looks for musicians across the board, with one simple goal in mind:

“We find people who write good songs,” he says. “That’s the genre.”

And they host their shows in an intimate 200-seat venue. The team behind eTown works to cultivate a grassroots atmosphere that’s focused on community and sharing ideas.

Like any good university, CU hosts a number of can’t-miss music shows each academic year. As the main entertainment provider for campus shows, Program Council puts on concerts in Club 156, Mary Rippon Amphitheater, Old Main Chapel and the annual WelcomeFest on Farrand Field.

Located in the University Memorial Center, Club 156 is one of Program Council’s main venues, in the past hosting major bands like the Foo Fighters and Phish. While Club 156 features many touring acts, Zahorik says he also books many student acts.

“A lot of the music that people are into [is] the same genres these acts are playing, since they’re a part of the student body,” he says. “So by booking all these different students, we’re giving people their own tastes of music and giving the band a chance to break out in their own way.”

Zahorik says many of the bands and DJs continue on to play the Fox and the Boulder Theater, opening for other acts or even headlining. Boulder has served as a launching pad for many bands, including Leftover Salmon, Big Gigantic and Yonder Mountain String Band.

Boulder plays an important role in the Colorado music scene. While Denver boasts a strong reputation for its live music scene, Ravisankar’s sees Boulder’s influence all over the Mile High City.

“Especially because we’re a college town, we’re a bit of a tastemaker too,” she says. “A lot of music young people are listening to that’s introduced here ends up filtering into Denver.”

And not just Denver, but the national music scene as well. Golaszewski cites Post Malone’s show at the Fox last fall.

“We had a chance to get him before he really popped,” he says. “[We booked him] and by the time he came through, his album was platinum. There was a huge line around the corner for his show. It was a great concert.”

As the music scene continues to grow in Boulder, Weingarden says, the city continues to attract better acts, letting them put on better shows.

“We’re super grateful for the communities [that help] us continue to make great music happen,” he says. “We’ll continue to book the best music we can as long as the people are coming out. …

We’re always busy and looking forward to the next show.”