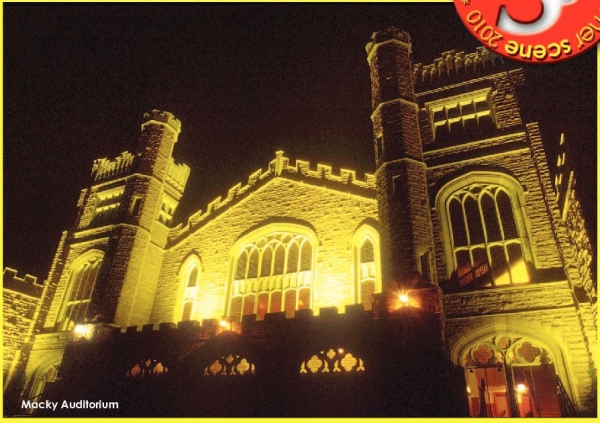 A sampling of CU’s best sights and sites, by foot

While there are many great sights to see during a Boulder County summer, one of the highlights has to be the Boulder campus of the University of Colorado.

Sure, a stroll along Pearl Street Mall or a Chautauqua trail shouldn’t be missed, but no visit to the area is complete without checking out a handful of CU attractions.

With its Tuscany-inspired red-tile rooftops, stacked-sandstone walls and meticulous landscaping, the campus is one of the most beautiful in the world, and even longtime locals can find a surprise here.

With the possible exception of the Euclid lot, parking on campus can be a pain, so you might try scoring a metered spot on the northwest side, along University between 17th and Broadway. From there, you can see the backside of your first stop, the towering Macky Auditorium. This 1923 gothic theatre has seen everyone from Eleanor Roosevelt to Jerry Garcia pass through its doors, and there are rumors that it’s haunted by the ghost of a female student who was murdered by a janitor in 1966 in the building’s west tower.

If the ghosts don’t get you, only a handful of steps to the southwest stands the university’s very first building, Old Main. Built in 1877, when the land was just a prairie bereft of trees, this structure now houses a CU history museum on its third floor, where you can see everything from an alum astronaut’s moon rock to CU grad Glenn Miller’s trombone to a faculty member’s Nobel Prize.

Stroll out the south door, and you’ll be on Norlin Quadrangle, which is at its best in the summer months. To the east, you’ll see Norlin Library, with the inscription “Who knows only his own generation remains always a child” above its main entrance. But head southeast along the paths that will take you to the Dalton Trumbo Fountain, a designated free-speech zone that has seen many a protest. Peek in the massive University Memorial Center, and if you’re hungry, grab a bite in the food courts or pick up a stuffed CU mascot, Ralphie the buffalo, in the bookstore. You could also bowl a few frames in The Connection, a student lounge/café/bowling alley.

After visiting the UMC, go back out to the fountain area and head due west, through an archway, and you’ll see the outdoor Mary Rippon Theatre, where you’ll return later to catch an evening performance of the Colorado Shakespeare Festival. Hang a left into the Henderson Building, the home of CU’s Museum of Natural History, where you can see everything from a giant triceratops skull to Native American art. There’s a cool little nook on the bottom floor for kids to play and explore.

If you’re up for more walking, go back the way you came, then head west from the fountain area through the covered walkway of the UMC Loggia. Making your way
northeast, you can check out CU’s brand-spanking-new visual arts center
and, beyond that, the hightech ATLAS Building.

Continue
north and then east along 18th Street and Colorado Avenue, passing the
Ketchum Building where Ward Churchill used to work before he got
canned. Soon you’ll descend into the shadows of Folsom Stadium, where,
if you’re lucky, you might be able to take in the stellar view of the
field and the Flatirons from the club level (try the elevators on the
east side of the stadium).

Finally,
if you’re not too exhausted yet, work your way south by southeast
across campus to the Fiske Planetarium, on the south side of Regent
Drive (enjoy that new tunnel under Regent; that crossing used to
involve taking your life in your hands). If you can, catch a show at
Fiske, or just browse the exhibits around the lobby area.

Still not done? More south-bysouthwest trekking will get you to the impressive architecture of the Wolf Law Building.

Oh, did you want to get back to your car? It’s on the complete opposite side of campus. Sorry about that.

But
if you head west and return along Broadway (don’t forget to hang a
right on University to find your vehicle), you can get a taste of the
shops and restaurants on The Hill, which will make it worth the trip.

A tourist
destination since the late 19th century, Boulder Falls is located on
the north side of Boulder Canyon Drive, about 11 miles west of the city
of Boulder. The falls, which have been called the “Yosemite of Boulder
Canyon,” form where North Boulder Creek tumbles roughly 70 feet to
enter Middle Boulder Creek.

Chautauqua Park
900 Baseline Rd. Boulder, CO 303-442-3282 www.chautauqua.com
Opened in 1898, the Colorado Chautauqua, one of three operational
Chautauquas left in the U.S., is a hub of community and cultural events
in Boulder. The Chautauqua Auditorium hosts everything from a silent
film series to live concerts, and food is available at the Dining Hall.
Also, Chautauqua Park is the gateway to many of the best trails in
Boulder Mountain Parks.

Dinosaur National Monument
4545 E. Highway 40 Dinosaur, CO 970-374-3000 www.nps.gov/dino
It’s about a five-hour drive, but it’s worth it. Survey the
craggy hills and explore fragments of a long-ago world where the
largest land creatures of all time once roamed and died. You can view
rock art, check out fossils, explore homestead sites and even go
whitewater rafting. Take I-70 west to Rifle, head north on Hwy. 13,
then west on Hwy. 64 to Dinosaur, then east on Hwy. 40 two miles.

Flagstaff Nature Center
The Flagstaff Nature Center teaches visitors to Boulder’s Open Space and Mountain Parks about the wildlife, plants
and history of the city’s plains and foothills. There are activities
and games designed to challenge children of all ages, and they have a
friendly and knowledgeable volunteers to answer all your questions. The
center is open 10:30 a.m. to 4 p.m. on weekends from May through
September. Follow Flagstaff Road approximately 3.5 miles, turn right
onto Flagstaff Summit road, and follow it about a half mile to the
summit of Flagstaff Mountain.

Garden of the Gods
1805 N. 30th St. Colorado Springs, CO 719-634-6666 www.gardenofgods.com
While
there are lots of sights to see in the Colorado Springs area (check out
Seven Falls and Cave of the Winds, as well), this one takes the cake.
Incredible red rock formations, including one in the shape of two
camels kissing, sit at the foot of majestic Pike’s Peak, one of
Colorado’s fourteeners. You can rock climb, check out the visitor’s
center, hike one of the many trails, or just drive through the park,
gawking up through your sunroof. To get there from I-25 in Colorado
Springs, take Garden of the Gods road west, then hang a left on 30th
Street.

Georgetown Loop Railroad
888-456-6777 www.georgetownlooprr.com
Colorado
has several historic tourist trains, including the Cumbres & Toltec
and the Durango & Silverton, but the Georgetown Loop is closest —
only about 45 minutes west of Denver on I-70. It was an engineering
marvel in its time, gaining 600 feet in elevation over a two-mile
stretch thanks to its corkscrew turns, including one over the majestic
Devil’s Gate High Bridge. After your ride, step back in time by
visiting any of the charming shops or restaurants in Victorian
Georgetown or rustic Silver Plume.

Great Sand Dunes National Park
11999 Highway 150 Mosca, CO 719-378-6399 www.nps.gov/grsa
One
of the most incredible spots in our state is only a four-hour drive
away. The dunes, the tallest in North America, are quite a sight,
nestled between alpine peaks and desert. Sandboarding or sledding down
the dunes is key, but there are also opportunities for hiking,
backpacking, riding, camping and mountain climbing in the area. Take
I-25 south to Walsenburg, then head west on U.S. 160 and turn north
onto Hwy. 150.

Royal Gorge Bridge and Park
4218 County Road 3A Cañon City, CO 719-275-7507 www.royalgorgebridge.com
With
21 rides, shows and attractions on 360 amazing acres, there is plenty
to do at this classic Colorado vacation destination. The crown jewel is
the world’s highest suspension bridge, strung across a canyon 1,053
feet above the Arkansas River. There’s also the cliff walk, inspiration
point, a petting zoo, a mountain man encampment and a water clock. Take
I-25 south to Pueblo, then west on U.S. 50, then south on CR-3A. And
make sure there’s lots of film in your camera.

Five pies that are worth the drive