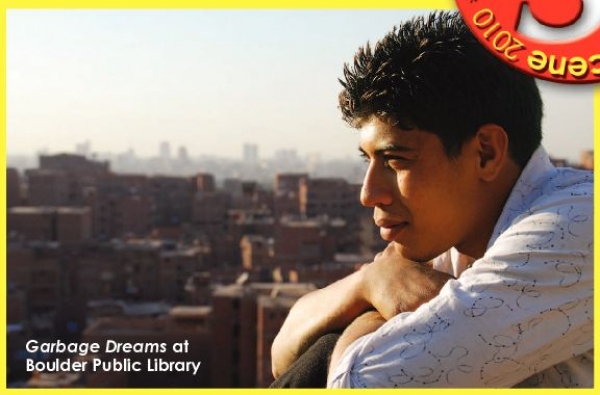 Pioneered and coordinated by film aficionado Joel Haertling, the Boulder Public Library Summer Cinema Program goes beyond popcorn flicks and offers up films that are themed, eye-opening and just plain fun for the whole family. This year’s lineup includes a little bit of everything, from avantgarde films about water to a collection of shorts created for the once-popular Scopitone, a jukebox that projects motion pictures via rear projection.

This summer’s schedule kicks off with The Gleaners and I, a French documentary by Agnes Varda that looks at gleaning, the practice of collecting leftover crops after a harvest. Varda doesn’t confine herself to the field, however, and the film introduces urbanite gleaners, city dwellers picking through other people’s remnants for food, knickknacks or simple inspiration.

Later in the summer, BPL will screen Woody Allen’s Sleeper, a sci-fi parody shot largely in and around Boulder, and the much-lauded documentary The Cove. You can also brush up on your history with a screening of the Nixon Interviews with David Frost. To celebrate another summer tradition, the Colorado Shakespeare Festival, BPL will be showing the 1967 Taming of the Shrew, featuring Elizabeth Taylor and Richard Burton.

All films are free and open to the public and start at 7 p.m. on the dot. For more information, call 303-441-3197, or visit boulderlibrary.org/events/films.html.

May 20 The Gleaners and I (Les Glaneurs)
May 24 A Tree Grows in Brooklyn
May 27 How to Have a Money Making Garage Sale
June 3 Sleeper
June 7 Captains Courageous
June 9 Garbage Dreams
June 10 The Taming of the Shrew
June14 Water Your Mind: Avant-garde cinema about water
June 17 The Nixon Interviews with David Frost Part One: Watergate
June 18 Teen Outdoor Movie Night
June 21 In the Mirror of Maya Deren
June 24 Scopitones
June 28 Water Your Mind: Documentaries about water
July 1 Found home movies
July 8 The Cove
July 12 The Girl by the Lake

After you’ve gotten your fill of all the great art inside the Boulder Museum of Contemporary Art, check out the great films, old and new, showing throughout the summer on their outdoor venue, right behind BMoCA and just next to the Dushanbe Teahouse.

This Boulder tradition kicks off July 10, and though the schedule hasn’t been decided yet, past screenings have included old favorites like Monty Python and the Holy Grail and Princess Bride, along with recent blockbusters like Slumdog Millionaire. Stay tuned to www.boulderoutdoorcinema.com for more information, or call 888-881-FILM.

It’s hard to believe that the first “talkie” was only released in 1927. Films have come a long, long way in the 83 years since The Jazz Singer first wowed audiences. The Silent Film Series at Chautauqua Auditorium takes audiences back to the days, not all that long ago, really, before computerized special effects, stereo surround-sound and overblown budgets became more important than great stories. The films showcased this summer range from Chaplin’s iconic dramedy The Kid to the suspenseful thriller The Cat and the Canary.

Pianist Hank Troy returns this year to provide live musical accompaniment so that patrons can enjoy these classics as they were originally intended. For more information, call 303-442-3282, or visit www.chautauqua.com

May 26 Reaching for the Moon
June 2 Our Hospitality
June 23 Beloved Rogue
June 30 The Kid
July 14 Clash of the Wolves
July 28 Her Night of Romance
August 11 Grandma’s Boy
August 25 The Cat and the Canary
Sept. 1 The Italian Straw Hat
Sept. 8 Flesh and the Devil

Seeing a favorite band or singer at the Boulder Theater is a treasured memory for many Boulderites, and this venue has played host to its share of big names, like Tori Amos and Johnny Cash. For more than 50 years of its history, however, the theater was just that: a great place to go see great films. And it still is, especially over the summer when it hosts events like the annual Bike Shorts Film Fest.

The theater is also home to the Boulder Weekly Film Series, which includes ever-popular screenings of The Big Lebowski. For more information or the latest schedule of films, call 303-786- 7030, or visit www.bouldertheater.com

As summer begins to fade into autumn, there’s still time for one more film festival. Dedicated to peace, love and understanding, Moondance International Film Festival will be celebrating its 11th year with nearly a hundred independent films, workshops, pitch panels and networking parties, as well as great local cuisine and brews.

Going to see a movie at Red Rocks Amphitheater is like going to a drive-in, except fun. Instead of sitting in your stuffy car in a weedy parking lot, you can sit out under the stars, take in the awe-inspiring view and enjoy your favorite cult classics on the enormous outdoor screen.

Celebrating its 30th anniversary this year, the Breckenridge Festival of Film is not only one of the oldest film fests in America, but the most scenic as well. Hosted by film critic Jeffrey Lyons and situated in the beautiful ski town of Breckenridge, this festival is popular for its great films and high level of audiencefilmmaker interaction.

In addition to brushing shoulders with one of your favorite directors, you might also catch a sneak peak at a future blockbuster. American Beauty and Shawshank Redemption both debuted here.

In the lull between ski seasons, there’s another good reason to visit the little mountain resort town of Telluride: the star-studded, drama-filled Telluride Film Festival. Cinephiles from around the world will converge here for the 37th year this September, but they won’t know what they’ll get to see until opening day.

Organizers keep the list of titles that will be screened under wraps until the festival kicks off on Sept. 3, but with past premieres like The Crying Game and Crouching Tiger, Hidden Dragon, this is sure to be a great way to spend Labor Day weekend.