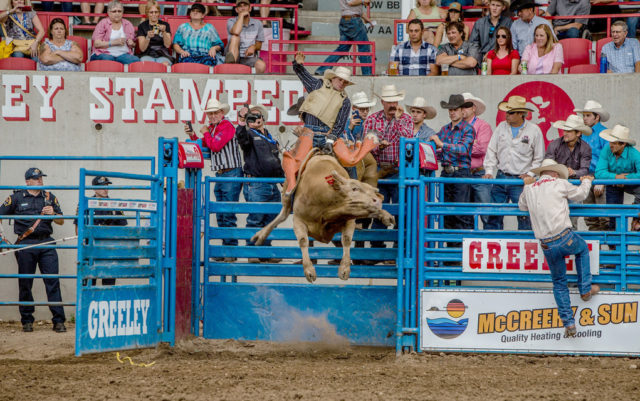 There was a time when people were drawn to Colorado for the abundance of farming opportunities and the utopian possibilities of new settlements rather than the craft beers and high-octane thrills. The makeup of 17th-century entrepreneurs looked a bit differently than the microbrew hustlers and Gor-Tex-clad athletes of today. But where cowboys used to herd the 300,000 buffaloes along the Front Range, a fleet of road bikes now keeps tabs on the plains’ back roads.

James Herman, rodeo chairman of Colorado’s largest rodeo, the Greeley Stampede, is convinced that these two cultures — the new urban-dwelling mountain lovers and the old-school open space lovers — need not be mutually exclusive. As the Greeley Stampede nears its 100-year anniversary, Herman’s mission is to use the event as a platform for connecting the past and the present

“As Colorado gets bigger and bigger, we feel like we’re losing some of our Western heritage,” he says. “So, [the rodeo] is a good way to preserve it.”

Since it’s inception in 1922, the Greeley Stampede has drawn in crowds to experience, honor and learn about many of the state’s founding traditions. Over the course of this year’s 12-day festival, hundreds of thousands of spectators will come from every corner of the globe. Dozens of classic rodeo events, from bull riding to demolition derbies to steer wrestling, will ensue. Six late-night arena concerts will sound long past dark. Drinks will be had. Miss Rodeo Colorado 2017 will be named.

Over the past century, however, a chorus of near-misses has split up the Stampede’s legacy of joyful refrains; the Women’s Christian Temperance Union, a devastating fire, a stampede that hospitalized 11 people, the 2000s economic recession, and even a cowboy’s death all tried to foil the rodeo’s success — to no avail. Over the past 96 years, the rodeo has stayed strong, and continues to build upon its mission to celebrate and preserve Western heritage.

The Stampede’s roots trace back to the late 1800s, when the town of Greeley dedicated a Fourth of July celebration to its super-star potato farmers who helped bring economic success to the newly-established settlement.

The town of Greeley itself was the product of one New Yorker’s imagination. In 1841, Horace Greeley had just founded the New York Tribune, a weekly paper that once boasted the highest-circulation in the country. As the Civil War dragged on, he grew obsessed with developing the West and fiercely encouraged those on the Eastern seaboard to migrate toward sunset. Eventually he popularized the phrase, “Go West, young man, and grow up with the country.”

Five years after the Civil War ended, Greeley sent his agriculture editor Nathan Meeker on a reconnaissance mission with orders to find the perfect spot to set up a utopian agriculture colony. Greeley’s vision incorporated a group of highly-educated and pious families, involved in sophisticated farming systems, collectively forging a new America.

Meeker scoured the Front Range and eventually settled in the swath of land nestled between the Poudre and the Platte Rivers. He planned for Greeley’s community to maximize the available irrigation technology, and he started building ditches for farms. He also immediately broke ground on a school. On Dec. 4, 1869, Meeker wrote “Call for a Western Community,” a letter that Greeley published in the New York Tribune to announce that applications were open for those interested in the utopia. Meeker received over 3,000 letters in response, of which 324 originals are now kept in the Greeley History Museum.

In the end, Meeker chose 700 families and directed them to the Rocky Mountain outpost that he continued to develop. In April of 1870, the first members began to trickle in: the original adventurous, risk-taking transplants that founded Weld County. It would be another six years before Colorado became an official state.

Predictably, farming became the cornerstone that supported and eventually succeeded Greeley’s utopian vision. Aside from a massive production of potatoes and cattle, Greeley was also making 25 percent of the nation’s sugar by 1920. The town continued its Fourth of July community celebrations to honor the farmers and their families, and in 1922, with 2,500 people in attendance, the yearly festival was officially christened the Greeley Spud Rodeo.

In the near-century since, the one-day event has grown to span 12 days, and its attendance has multiplied a hundredfold. Last year, DeWitt estimates more than 250,000 people passed through the festival, some flying in from countries across the world. The name has changed a handful of times, transitioning from the Spud Rodeo to Greeley’s Rocky Mountain Stampede, to the Greeley Independence Stampede, and finally, in 2006, settling at today’s name: simply the Greeley Stampede.

“Our goal is to expose as many people and as many different cultures as possible to this Western heritage. Rodeo and agriculture are a huge part of our past,” DeWitt says. Although he didn’t grow up in rodeo culture himself, he’s immersed himself in it over the last seven years, starting with helping the Stampede organize its music and entertainment packages. Now, the family-centered culture, high-energy people and supportive community that he’s found through rodeo are the most influential and positive parts of his life. This gives him the confidence that others can come into the rodeo experience blind and be transformed in the same way.

In recent years, the Stampede has initiated a big push to broaden its scope of “rodeo” and attract families or individuals who may not have been interested in the archetypal macho-cowboy-riding-angry-bull trope. The music that the Stampede organizes is one of its big initiatives, and thanks to DeWitt, it’s become one of their most attractive elements.

“My goal is to reach out to the young, the old, the foreign — I don’t care who you are,” DeWitt says. He wants the diversity in the Front Range to be reflected at the Stampede, and he believes the concert series stands the best chance of broadening attendee demographics by appealing to a larger pool of people.

“We have two days this year that we have devoted stages to nothing but Hispanic music,” he says. In addition to this, they’ll have headliners like the Barenaked Ladies, Toby Keith, Chase Rice and numerous other musicians to fill in the 50-plus music acts over the course of the festival. The organizers are hoping this draws in new spectators, getting them to the event, and then letting the “rodeo bug” take over, says DeWitt.

The Stampede is still ripe with old-timey cowboy culture and events, while other non-traditional events include the RV demo derby. “We sell that out every year. We’ll have five to six RVs in an arena just crashing into one another,”  DeWitt says. “It’s a crowd favorite for sure.”

By the end of the Stampede, both DeWitt and Herman hope that people who have taken the chance to visit understand that the rodeo wouldn’t be what it is, even in it’s new-age-meets-old-age glory, without the legacy of the county’s founders. “That’s an integral part of the event. The Greeley area has such a unique Western history within its agriculture community,” Herman says. “The rodeo is a huge community event, and we have such a great community. That’s what this whole ordeal comes down to. Let’s celebrate that.”