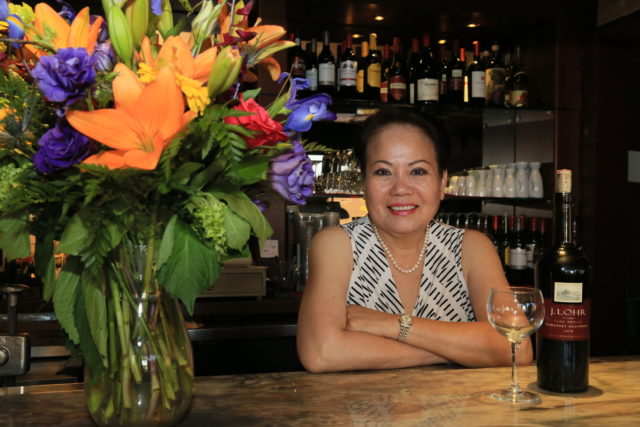 The name of the iconic eatery still says it all: Chez Thuy Fine Vietnamese Cuisine. Thuy Le is the most successful, least-known restaurateur in the city’s dining history, outlasting hundreds of restaurants of all flavors. She has been dishing spring rolls in Boulder since the start of the Clinton administration.

And while the sign on the building says Vietnamese, the fare being served is really Thuy (pronounced “twee”) cuisine.

A lot of Thuy’s customers are regulars, dining every week or month or year. “People come back after five years away and tell me that they can’t find food that tastes like this,” she says.

“That’s because it’s food by me. I’m not always in the kitchen, but I’m always tasting sauces. It has to taste right to me.”

Ironic, because Thuy did her best for much of her career to avoid the kitchen. “I didn’t go to chef school. I learned with the job. In the restaurant business, none of the Vietnamese chefs would teach me. If I liked a dish I figured out how to cook it,” she says.

CUTTING LIME WEDGES IN DALAT
Growing up in Saigon, Thuy’s parents died when she was young, and she lived with her grandmother. “I always loved to eat, but I never learned how to cook from her. We ate simple dishes like Vietnamese sweet and sour soup and fish hot pots,” she says.

By the time she was 17, Thuy had left home and went to work in the city of Dalat. “I always worked in coffee shops and bars. I was a waitress most of my life. I never went in the kitchen. The only thing I knew how to do was to cut lime and lemon wedges for cocktails,” she says.

By 1970, the Vietnam War was reaching a dangerous crescendo. Thuy says: “I was married to an American civilian, and he brought me and our son to the U.S., to Spokane.” She and her son eventually moved to Denver because they knew people here. “I was working 2 p.m. to 2 a.m. as a cocktail waitress at a Mexican restaurant in a Holiday Inn,” she says.

Southeast Asian refugees started arriving in large numbers in the metro area in the late 1970s. Until then there were only a handful of local Vietnamese or Thai restaurants. “A lot of the new people were opening grocery stores and restaurants, especially on Federal [Boulevard in Denver]. I’m here a long time working hard, so I’m wondering, ‘What about me?’” she says.

Thuy — or “T” — and her girlfriend “Wa” (who knew how to cook), opened the T-Wa Inn in Denver with a few simple dishes that were unfamiliar to most local diners except veterans who had developed a taste for the complexities of Vietnamese seasoning while overseas.

“We started getting big right away. Everybody wanted to have the soft shell crab,” Thuy says. The dish, Cua Lột — batter-fried sweet soft-shell crab — is still a menu favorite. The T-Wa Inn became one of the region’s best-known Asian restaurants.

27 YEARS AND COUNTING
After years in the business, Boulder beckoned.

“I always liked Boulder a lot,” Thuy says. “This place on 28th Street used to be Old Saigon Restaurant. In 1992 they asked me if I wanted the location. I said yes right away.”

The business enterprise needed to pay off in the long run because Thuy invested $200,000 to clean and refit the leased kitchen and restaurant. She now owns the building, and many of her staff have been with her for years.

“I really didn’t want to do pho at all because it’s a lot of work. Then, the customers started asking, ‘Do we have pho?’ So, after that, we had pho,” Thuy says. A big white bowl of five-spiced broth is filled with slurpable noodles, green onions and diverse meats, like the top combo of rare steak and brisket. A plate of bean sprouts, Thai basil, jalapeño slices and lime wedges accompanies the bowl, along with condiments.

DISHES FROM ASIA AND MARTHA
Thuy is no purist and has featured dishes on her menu from across Asia. “When I opened Chez Thuy in Boulder there weren’t a lot of Asian restaurants. I knew I had to have choices the customers want,” she says.

That’s how the restaurant came to serve Chinese-influenced sesame chicken and larb from Laos.

Locals fell in love with the wide rice noodles in chow fun, the thin ones in pad Thai and chewy udon noodles in peanut butter coconut green curry with shrimp. They applauded fare that could easily be prepared vegetarian, low-fat and largely gluten-free.

Beyond the must-haves, the menu keeps evolving. “That gives me a chance to introduce new tastes that I come up with. It keeps it interesting,” Thuy says.

Take the eatery’s popular Malaysian seafood stir-fry. You would be mistaken if you assumed it was an old family recipe. “I was watching Martha Stewart on TV, and she was making a Malaysian stir-fry. It looked so good, so I decided to make it and put it on the menu,” Thuy says.

THE FUTURE OF THUY CUISINE
Chez Thuy is still introducing itself to Boulder newcomers. On a recent afternoon, a large group of CU engineering students was dining for the first time. Rapid-fire Vietnamese comes from the kitchen as Thuy’s son, Michael Reeves, keeps an eye on everything in the dining room, as he has for 15 years.

Thuy doesn’t hang out with other chefs, worry about creating a buzz or care about social media influencers. “I just have guts. I’ve always worked hard,” she says.

A longtime customer stopped in recently to get takeout and made a point of saying, “Hi,” to Thuy. “He said: ‘I’m so glad you guys are still here and prospering,’” she says with a smile.

John Lehndorff has written about food in Boulder since the late 1970s. He hosts Radio Nibbles on KGNU (88.5 FM, kngu.org.)