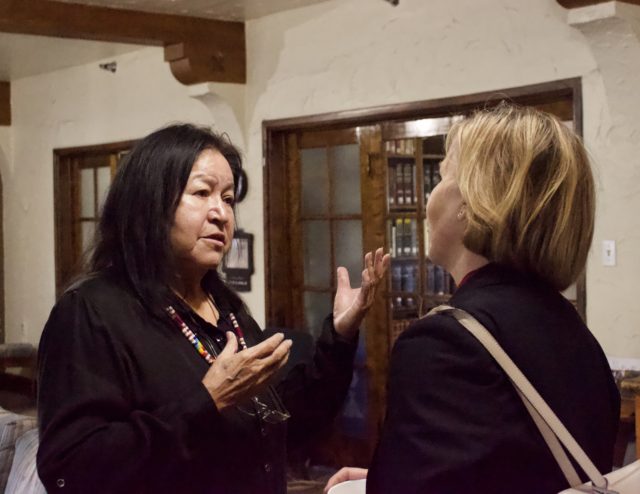 Over the years, Ava has worked across different communities in Boulder County — as well as throughout her vast network of connections in the Native American community — to convey the importance of indigenous knowledge. An avid historian of Arapaho culture, Ava is constantly seeking new information and knowledge about the history of her people, and how it relates to her presence in this place on Earth.

Ava is from “here” in a way that very few other people can claim. She’s not among those in our area who appropriate or invent ceremonial practices — supposedly of indigenous origin —  shamelessly incorporating them into awkward, new age mélanges. In fact, Ava is in the planning stages for a conference panel that asks the question of who can claim to be Native American. Her concern comes from reports she’s heard of people in Boulder County engaging in questionable practices under the auspices of indigenous ceremonies.

In speaking of her Arapaho ancestors, who worked for peace with the settlers, Ava refers to the Doctrine of Discovery, which itself descends from a 15th-century papal edict issued by the Catholic Church that gave Christian explorers the right to claim lands they “discovered” for their religious monarchs.

“Any land that was not inhabited by Christians was available to be discovered, claimed and exploited,” according to a Boulder History Museum Exhibit on Arapaho Chief Left Hand, which features Ava. This Doctrine of Discovery was institutionalized into American law, she says, preventing indigenous people from owning title to lands on a continent they’d inhabited for millennia.

In response to this travesty, Ava has worked to educate people. She is a filmmaker and public speaker. Among her films is the documentary, Everything Has a Spirit. She has also worked on films dealing with issues facing indigenous people, locally and nationally. She has spoken publicly in many different venues.

Ava is also active with groups including Right Relationship with Native Peoples Boulder, which works with local governments and organizations to help Boulder Valley residents learn about the indigenous people who lived here historically and those who live here today, as well as with Rising Voices: Climate Resilience through indigenous and Earth Sciences, which, according to its website, “is a network of Indigenous, tribal and community leaders, atmospheric, social, biological and ecological scientists, students, educators and other experts from across the United States and around the world.”

Ava’s work focuses on articulating how the Doctrine of Discovery, colonialism and capitalism have created a culture that behaves in ways that have led to environmental despoliation, global heating and the loss of indigenous cultures. And how indigenous knowledge and the indigenous people who hold that knowledge are integral to a pivot we all must embrace to survive. Ava says her focus is on our symbiotic relationship with the cycle of life, with the Earth, and with each other.

She is a master of reinterpreting these themes using new formulations suited for each context. Among these contexts was the recent visit by a delegation of government officials from Finland to the Native American Rights Fund, who sought insight into how to preserve indigenous knowledge and wisdom. Among them was the Finnish Minister of Justice, Anna-Maja Henriksson. Ava told the delegation about the problems facing indigenous people in America in an effort to assist them in helping the indigenous Saami people of Finland.

“One of the things we are advocating for is to include the teaching of our histories into public education,” Ava told the delegation, “because I learned — as a lot of everybody else learned — that George Washington was the father of our country; Columbus discovered our land. Those kind of things, we want to change those, and let people know that we’ve lived here for tens of thousands of years.

“I’m so happy to always say that because I’m so related to this land because of that,” she adds.

Of her work with Rising Voices, Ava told the Finnish delegation that among their efforts toward climate resiliency for all people is a recognition, “that we truly need to work together as human beings as part of the cycle of life to be here in the future for everything; for life. That’s why I want to be a useful being and to make positive change.”

Whether she’s shooting her next film, speaking at a conference panel, or being interviewed by a local journalist, Ava Hamilton tirelessly works to tell the true story of the Boulder Valley, and what it means to be a human being in this place.