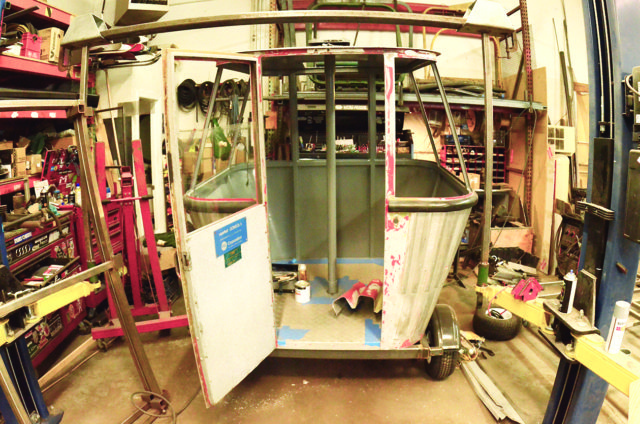 Zack Finger is sweating. It’s hot in his fabrication shop, no air conditioning in the dying embers of summer as the late-season sun beats down on a dry Boulder afternoon. Despite the heat and the sweat, Finger, the founder of Boulder’s Last Chair Customs, is in his element. He’s wrapping up the pristine restoration of an old triple-seater chair, powder coated white, with new, beautifully finished beetle-kill pine slats for the seat. Old chairs from ski lifts aren’t usually considered works of art, yet as Finger makes the final touches to this restoration, it’s hard not to see the elegance and the simplicity of the finished product as anything but, or — at least — artisanship of the highest order.

Finger loves old chairlifts. And old gondolas. And old skis and snowboards and, really, anything that’s a physical manifestation of the history of sliding on snow down mountains. A transplanted snowboarder who grew up in Poland, Maine, and ended up in this steamy fabrication facility at the east end of town in the 6600 block of Arapahoe Avenue, Finger still finds the time to sneak up to Eldora on powder days despite a growing order book that includes a variety of chairs from lifts across the country and interesting one-off projects like unique trophies for skiing and snowboarding events or a gondola car turned bar.

The Gondi Bar is an ingenious creation that gives a second life to old No. 80, a derelict shell of a gondola cabin that Finger pulled out of the woods in someone’s backyard in Leadville. It was, he says, “filled with beer cans, a toilet and a bunch of other trash,” a nightmare but also — when it comes to a piece of skiing’s history — a massive score. The lift was manufactured by the now-defunct company Yann and was the only gondola ever constructed by the brand. Built for Keystone, Colorado, it was in operation from 1982 to 1984 before being deemed unsafe and scrapped. There are probably only a handful of Yann gondola cabins left on the planet and No. 80 is one of them.

It is just one of the physical manifestations of Finger’s obsession — one that he never planned to turn into a career — with old lifts. But the machinist by trade and lifetime skier and snowboarder finally got sick of working in fabrication shops and decided to strike out on his own. His plan, born during an evening partying and conversing with friends was simple: He’d find old chairs from lifts and repurpose them for residential use. The gondola cabin from Keystone is merely his latest project, now completed and mounted on a street-legal trailer so it can be towed to parties and other events. Old 80 is ready to rock. “You should have seen how stoked the State Patrol guys were when we took it to get registered and licensed,” he says. “They’d never seen anything like it! We hope that people will be stoked to rent it for their event or other happening, because we think it’s awesome!”

Finger’s other projects are usually repurposed from defunct chairlifts across the country. Not only because they make great benches or porch swings but also because there are a lot to choose from. The past two years in particular have been a bonanza on the local front, with nearby ski areas Eldora and Loveland retiring long-running lifts and Finger getting his hands on the goods.

Being able to score locally is highly beneficial for Finger. While chair lifts may appear to be light and airy when you are riding them, these are actually solid — and heavy — items. A single triple chair, for example, can weigh more than 200 pounds and, due to the awkward shape, takes a minimum of two strong people to wrestle it into the back of a pickup truck. Getting a chair down to Boulder isn’t easy and then there’s also the challenge of moving the finished projects into a client’s home or onto their property. While Finger has been known to drive several days to chase down rumors of a historically significant chair or gondola car stashed in a field and overgrown by weeds — “I love dragging old lifts out of fields,” he admits — he feels pretty lucky when he can drive up to Eldora and grab a chair or two, particularly because ski areas don’t replace lifts very often.

Finger’s Boulder shop is full of equipment designed to handle heavy and ungainly items such as old chairs from ski lifts, but even he admits that moving stuff this heavy can be stressful and unnerving. And then there’s the fabrication side of things. Burns are commonplace when welding the attachments that allow chairs to hang on a porch or adding the “feet” to turn them into benches.

Chairs from Loveland and Eldora are cool and make great benches or unique porch swings that are sturdy, durable and a perfect fit for those who embrace Boulder’s sporty outdoor lifestyle. But what really gets Finger exited are unique pieces like old No. 80 or other relics of ski lift history. And when it comes to history, his cluttered shop in east Boulder has some real gems. These antiques include old wood slat doubles from the East Coast, one of Beaver Creek’s original Larkspur chairs and an ancient double from Aspen Mountain.

Then there’s one of Vail Mountain’s original Lionshead Gondolas. This iconic lift dates from the mid-1970s and was engineered and constructed by the VSL Corporation out of Los Gatos, California, in collaboration with Switzerland’s Carosseriewerke AG. For years it was the iconic route up Vail, the red cabins gracing the ski area’s marketing campaigns along with countless posters and postcards until the lift was replaced by the Eagle Bahn Gondola in 1996.

There’s also his eclectic collection of gondola cabins from Winter Park, all of which were recently acquired, and are a funky slice of Colorado skiing history. Upon tearing into one of the units, Finger discovered the padding for the benches inside each car was actually a tightly folded wool blanket, presumably there in case of lift failure or malfunction for the unfortunate occupants to use to ward off hypothermia while awaiting rescue. “That really doesn’t inspire much confidence,” Finger says with a laugh.

Finger laughs a lot when he talks about all the lifts, skis and other motley bits of skiing history scattered around his shop. He knows his obsession with such things is a bit odd, and that most people wouldn’t find joy in the stack of florescent mid-’80s skis stashed in the corner (they’re destined to be made into decorative skiflakes for man-caves, garages and ski tuning rooms), nor would they see beauty in a rusting two-person chair that once did duty on Aspen Mountain. But that doesn’t bother him.

“I love skiing and I love these old lifts,” he says. “I never thought I’d be doing this, but it’s my dream job.”