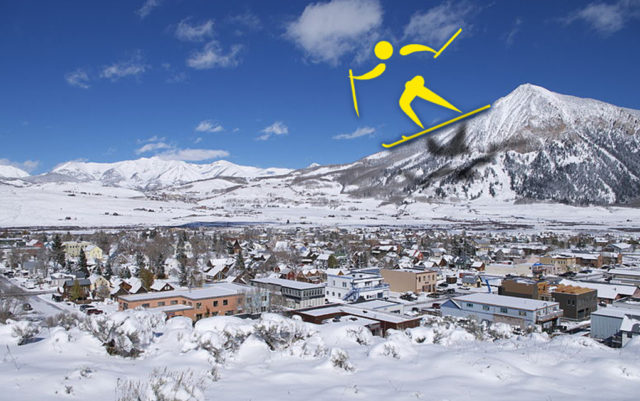 Colorado’s largest cross country ski race doubles as the most goofy one. Entering its 31st year, Crested Butte’s Alley Loop Nordic Marathon draws some of the country’s elite Nordic athletes while also engaging the town’s free-spirited locals. Although there are hundreds of serious racers clad in aerodynamic spandex and seeking fast times at the Alley Loop, attendees are just as likely to see tutus, boas, masks, wigs, the ubiquitous Viking helmet, and elaborate costumes of all sorts on race day.

It’s as if the Alley Loop is Crested Butte’s very own Halloween with a few key modifications: winter white replaces shades of fall orange, ice is more likely to accumulate on exposed facial features than sticky candy residue, and everyone decides to wear the same costume — snug boots and skinny skis — on their feet for the big day. Okay, the similarities between Halloween and the Alley Loop are found mostly in the creative clothing and spirit of it all, but the playful visuals do belie some sort of connection there.

It’s not unusual to see the most enthusiastic participants take group costume themes to a whole new level by attaching themselves together to form a “Nordic Train” with whistles and all, an airplane or a Viking ship. If one member of the festive group falls down on the course, the whole costumed bunch is likely to go down in a cloud of snow dust (or, more realistically, with a hard crunchy thud).

Another unique feature of this race is the course layout itself. Starting on freshly groomed corduroy tracks on the town’s main thoroughfares, the course then leads racers through back alleys, over narrow foot bridges and between storefronts and residences. Large portions of the course are lined by the towering snow mounds typical of high altitude mountain locales.

This design means passing other racers can be a challenge in the narrow confines of what some call “the last great Colorado ski town.” However, the course does open up eventually as it winds up and into the elevated and jaw-dropping outskirts of town. The finale brings skiers back to where they started in the heart of the action.

There are various races throughout the day that cater to different age groups, fitness levels and degrees of athletic ambition. The kids’ races range from 1.5 km to 3 km, adult races start at 5 km and the main event requires skiers to traverse 42 km. The long 42 km version of the Alley Loop is a qualifier for the American Birkebeiner which is the country’s largest Nordic ski race and attracts over 10,000 racers to Wisconsin each year. By comparison, the Alley Loop has drawn upwards of 700 racers in recent years.

Aside from serving as an opportunity to qualify for the nation’s premiere Nordic race, there is cash on the line for the more serious skiers at the Alley Loop. The prize purse totals $5,000 with $1,000 of that going to the fastest finisher in the 42 km main event. The “King and Queen of the Loop” awards pay out $400 and go to the man and woman who finish their first lap fastest. An achievement bell is given to everyone who completes all 42 km in under three hours.

In addition to the Nordic races, a fat tire bike race was recently added to the lineup and takes place on the Friday before Saturday’s Alley Loop ski events. There is also a pub ski crawl on Friday night, although that probably doesn’t fit into the schedule of the most serious racers.

Anyone who has ever been to Crested Butte knows that few places rival its stunning beauty. Telluride makes a strong statement with its waterfalls, towering 360 degree mountains and easy access to the slopes, but if you have any inclination towards claustrophobia then the open valley and wide vistas surrounding Crested Butte will probably be more to your liking.

If collecting icicles on your face isn’t really your thing, the town boasts plenty of attractions for more casual onlookers. Taking deep breaths of high country air is a good place to start, both for sanity in our chaotic world but also as a sound practice for lowlanders to ward off potential altitude-related health issues due to the town’s elevation of 8,885 feet. As in all high-end mountain towns these days, there are oxygen bars in case things really go awry. And multiple coffee shops roast their own beans fresh. Crested Butte’s fine dining, small shops and the amenities of a first class mountain town await skiers and non-skiers alike.

The paradoxical yet alluring nature of the Alley Loop is that some folks register for the cross country ski race to pursue athletic achievement at the state’s highest level while others view the event as a good excuse to dress up regardless of their ability or inability to ski. Case in point — Superman actually won the main race one year. Maybe one of the jubilant Vikings, butterflies or cowboys on skis has a chance for glory in 2017.