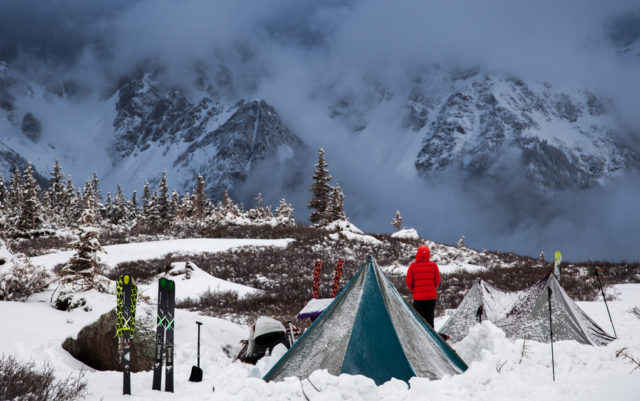 For the Mahons, a weekend’s success depends on how much energy they have left when Monday morning rolls around. “We typically pack it all in the weekends,” Christy Mahon says of her and her husband’s outdoor adventures. “The goal is usually to come back as tired as possible on Monday.”

Christy and Ted are ski mountaineers. Since meeting in 2000 — through mutual friends on skiing adventures — they’ve been ticking off achievements, one by one, from a never-ending list of objectives: hike all the 14ers, ski all the 14ers, run an ultramarathon, run another, traverse that ridge, connect those features and so on. For three years they chipped away at their biggest project to date: skiing the 100 tallest mountains in Colorado, known as the Centennials. Last May, when they finally finished, Ted became the third man to do so, and Christy, the first woman.

For the couple, who’ve been married since 2009, their pursuits feel incremental. They take one, sometimes two mountains, one weekend at a time. The sum of these pursuits accumulated in their nomination as 2016’s National Geographic Adventurers of the Year.

“We’re not doing anything that anyone else couldn’t do,” Christy explains. “It’s just about being consistent and making the most use [of your] time as possible.”

But considering that both, while sponsored for their outdoor pursuits to some degree, also maintain day jobs — Christy as a development director for the Aspen Center for Environmental Studies, and Ted as a full-time ski instructor, guide, website designer and photographer — their commitment to the outdoors goes beyond the scope of the typical weekend warrior.

“There’s a challenge to find the time,” admits Ted, a 44-year-old New York native who moved to Colorado in 1994 for a ski season and never left. In addition to his Rocky Mountain endeavors, he’s also stood on top of Everest, Denali and Ama Dablam, among other world-class peaks, and snagged a top-10 finish in five Hardrock 100-mile endurance races. “You have to be efficient with making the most of your time off,” he says. “There are not a lot of rest days when you’re working. The work week is the rest time.”

“Exactly,” Christy adds. “But during the week, it’s still waking up at six to skin up [our local mountain] and running after work. So you have to be a little bit structured to get it all in [training-wise]. It’s worth it; it’s possible. You don’t get a lot of days at home, relaxing. There’s not a lot of sleeping in.”

Christy, 41, is a Colorado native. This year, she was honored with the Sportswoman of Colorado Award for ski mountaineering for the second time, subsequent to initial recognition in 2011 after skiing the 14ers.

And their relationship has enabled them to push their mountaineering to new limits. “[Since we started dating,] we were our main partners,” Ted says, remembering the beginning of their relationship: sharing ski lifts, mingling with friends in cabins and mountain huts. One of the couple’s first dates was Christy’s first ski descent off the 14er Quandary Peak.

“Some people keep those two roles separate, friends and relationships. For us it was the same thing. It’s cool because you have someone who shares the common interest,” Ted says.

Christy agrees. “One awesome thing that changed [when we met] was that we always had a built-in partner to do things. Especially as a girl, a lot of my friends wouldn’t necessarily be into [driving six hours after work on Friday and skiing on Saturday], so it’s been great to have so many years with a consistent partner.”

“One of us is always encouraging the other to do things with our free time,” Ted adds. “It helps us both when we’re pushing each other to get out and challenge ourselves. Partners can be hard to come by. You can have skills and goals, but not having a partner sometimes limits that.”

“Yeah, it’s great [being together],” Christy continues. “You can spend the week planning, knowing you have a partner for the weekend. Backcountry skiing is hard to do on your own.”

During their push to complete skiing the Centennials, Christy thinks their relationship also made safety decisions easier. “I’d say because we’re partners, and also husband and wife, we’re not afraid to just say: Doesn’t feel right today, let’s just come back. I think a lot of people don’t talk about [turning around before the summit] that much because it’s not much fun. There were actually quite a few that took multiple trips.”

Ted chimes in, “Yes, between the two of us, about 20 peaks required more than one attempt. That gets lost in the instant Facebook and Instagramming where it always looks like wild success. It’s not really the reality.”

Now having completed the Centennials ski challenge, Ted says, “We have a goal to eventually do the bicentennials. We want to ski at least five a year.”

Ted says, “After all the years of the Centennials keeping us kind of local…”

Christy interjects, “Well, in the state.”

“Yes,” Ted resumes, “Now we’re trying to line things up [to ski] abroad: Japan, Europe, loosely talking about going to Nepal. These things take a lot of planning. We need to figure out what’s realistic. We’re always working on this stuff. It’s not always grand, but there’s not enough time to do everything we want to do.

“It’s really special to share all this stuff. Because these outings are the most memorable things we’re doing, so it’s special to be doing them together, not with others, and then coming home afterwards and trying to relate it.”

Christy hums in agreement. “Yeah, I wouldn’t have it another way.”