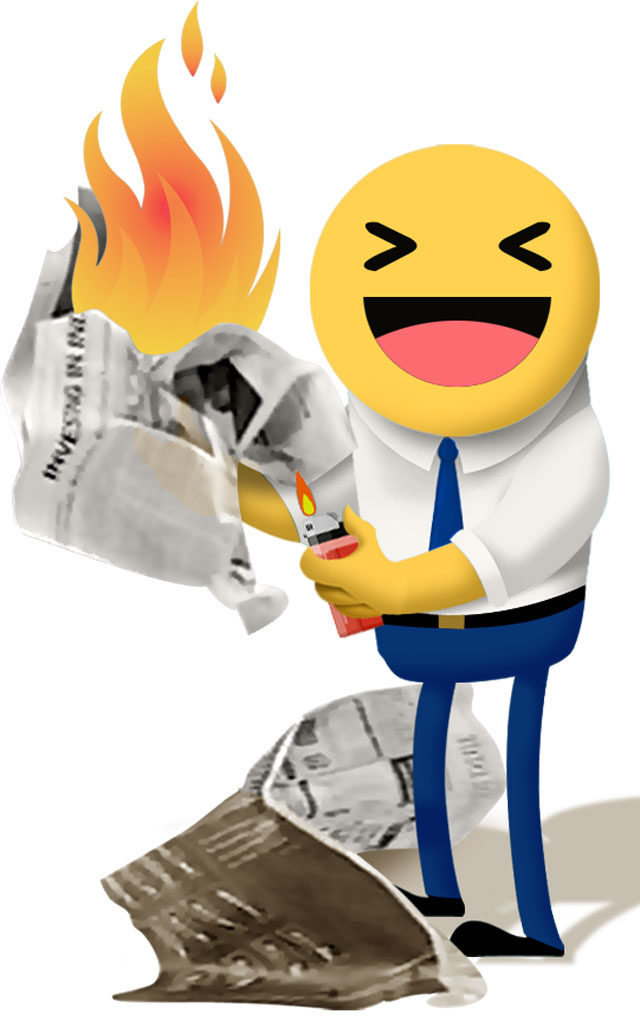 Running this story on Facebook is not our way of whining about Boulder Weekly’s business model. Fortunately, we never made page views and unique visitors a cornerstone of our endeavors. That’s to say, from a business perspective, we really don’t care if Facebook changes its algorithm every 10 seconds. We care if it destroys our democracy.

Unlike the companies mentioned in the article, we don’t try to “sell our journalism aggressively” because social media is such a “noisy place.” We understand that trying to shout louder than everyone else in a really noisy place only accomplishes one thing: the place simply gets noisier.

On the previous pages, the executive from the McClatchy newspaper chain says, “If you’re writing stories that aren’t getting read, you’re not a journalist — you’re keeping a journal.” And to that I say, what a complete idiot.

By that news executive’s measure, a 3,000-word expose on the corrupting power of PAC money (read: anti-clickbait) is less an example of journalism than a titillating 500-word piece about an Olympic skater’s costume fail titled, “She showed us more than she bargained for.” Seriously, this guy is a perfect example of the industry’s visionless executives who have hastened the demise of the mainstream news industry at least as much as Mark Zuckerberg’s controversial platform.

The news industry isn’t failing because of unpredictable changes to algorithms. It’s failing because it has replaced its responsibility to our democracy with a clickbaiting-for-dollars business model while simultaneously gutting its editorial staffs.

Zuckerberg may have handed the mainstream news industry the gun, but it’s the thoughtless executives at the top who have put it to their head and pulled the trigger.  But there’s plenty of blame to go around for how we got here.

If you get your “news” primarily from Facebook… there’s a good chance you’re helping to drive our democracy to the brink. It’s not that you’re a bad person, it’s just that your opinions about what’s best for our country have likely been shaped by a good deal of inaccurate or completely false information.

I’m not saying you are unintelligent. Anyone who believes that they are not susceptible to the power of sustained exposure to propaganda is simply ignorant of how our brains work. If you’ve been trapped in a self-affirming Facebook feedback loop, red or blue, you are a victim. But even so, it appears that it was Facebook’s victims from all across the political spectrum who made our country susceptible to the Russian attack that has imperiled our nation and given us President Donald J. Trump.

Thanks to Vladimir Putin, we now know the dark side of Facebook news. The short version: Russia uses the platform to feed our worst prejudices, left and right. It gives us false information in the form of news we want to believe and then it encourages folks from both sides to show up for a protest or rally at the same street corner at the same time. And when all hell breaks loose as a result, Russia’s fake news has created a real news story of violence and strife that then helps tear our country apart.

I’ve got to say, it’s nothing short of genius. But it’s also our own fault for trusting the flow of critical news information into our lives to a soulless platform designed to generate profit by telling college students which coeds are the hottest. What the hell is wrong with us? Are we really this lazy and undiscerning? Does it take a village of idiots to destroy a democracy? Apparently so.

It is the news industry’s decision to over-hype every hateful, ignorant  word out of Trump’s mouth in its effort to chase the magic algorithms that have made it nearly impossible for folks to tell the difference between their “real news” and Facebook’s ocean of  “fake news.”  What we need is more  “responsible” news, otherwise it all starts to look the same.

If the McClatchy guy is right, then to save our democracy we need way less “journalism” and far more journalists keeping journals. But we also need an electorate that’s able to tell the difference and willing to seek out the latter. We all have to try harder.

the form of a tempest