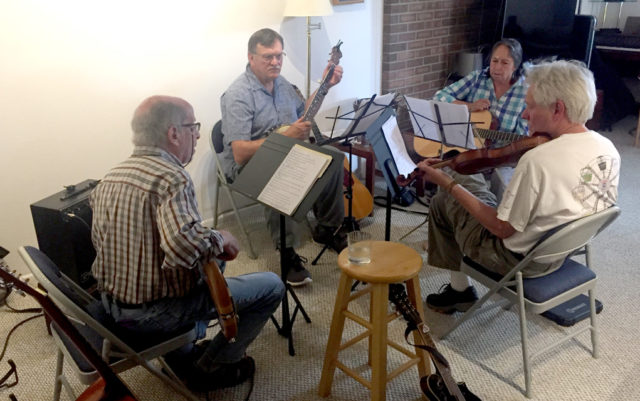 When I get to Harry Tuft’s condo, one among dozens of identical blue boxes, I found the door wide open. Sheepishly, I walk inside to find Tuft out on the back balcony, surveying the carports from his southeast Denver tower. He greets me with a warm hello, like I’ve known him for years, and says I’m free to help myself to whatever was in the fridge as he pours himself a cup of espresso.

The inside of his condo is clean and sparse — there’s just enough furniture and more than enough musical instruments — a keyboard in the corner and guitars, basses and cases tucked into every possible cranny. We get to talking about nothing in particular, waiting for his bandmates to arrive.

One-by-one they let themselves in, just like I did but with noticeably less trepidation. First enters Jack Stanesco. He first met Tuft at his store, the Denver Folklore Center, when it opened its doors back in 1962. Next is Mag Hayden, who wandered into the Center two years later only to stay and work there for the next few decades. Last to arrive is fiddle and mandolin player Ron Jones, whose relationship with Tuft seems to predate memory itself.

Immediately they start unzipping the instruments from their cases while making small talk — going over logistics and traffic and scheduling. They don’t seem to be in any kind of rush, even though this is their first rehearsal covering 25 songs in preparation for a show that is just two weeks away. But even if they don’t get paid for the music they play, these are pros. They know the first downbeat will come and when it finally does, Tuft looks up at me with a smile of pure glee on his face — the kind I’ve only seen on the face of someone in love.

A lot can be said about the man behind that smile. Harry Tuft is the founder of the Denver Folklore Center, progenitor of Swallow Hill music and has promoted some of the most legendary shows in Denver during its hippie heyday, bringing the likes of Joan Baez, Taj Mahal and even Bob Dylan himself to the city.

You can say all that about Tuft, but it would be enough to say that he is simply a guy who loves music, thinks it endlessly beautiful and knows no other way to live than to share music with his community. Rarely does he get distracted by grandiosity, staying resolute in his quest to make folk music — plain, simple and humble — with an authenticity that has attracted the most famous of bards like moths to a flame. Without Tuft, music culture in Colorado would be a different beast.

But today, Tuft is recently retired and enjoying life without a schedule. He sold his shop, took a few trips to Hawaii and is busy brainstorming for a long list of musical projects he’d like to pursue now that he’s got the time. This includes his upcoming performance at Swallow Hill but honestly, he says, he really isn’t focused on all that just yet.

“I have this house that I’m trying to sell,” he says. “It’s full of more than 50 years of pack rat stuff that I am having to sift through, but it’s not so easy just to put it in a box and toss it. Not only is it a house that’s full of what is like an archive of my musical life, but of the life I shared with my two daughters and my ex-wife, now a close friend.

“In order to sell the house and get through all that stuff, I had to develop a system, separating the stuff into what I will sell and what I will keep. There are five categories: sell it, give it away, keep it for the kids, throw it away, archive it.”

With only the first load of discarded belongings off to the dump, Tuft is just starting his behemoth project, but he’s sure of the treasures he will find.

“I know there is great stuff,” he says. “I was pretty good about saving articles, posters and calendars — lots of stuff from that time. Not to mention I have a world’s worth of recordings from back in the day. Do you know of Ramblin’ Jack Elliott?” he asks of the folk finger-picker often referred to as the “son” of Woodie Guthrie and the “father” of Bob Dylan.

“Well, Jack was one of the first people I put on in concert in 1964 and he was at the top of his form. I have a wonderful tape of him that will be my first release. From there I have several others, like I have this wonderful tape of Taj Mahal when he was just performing solo.”

Tuft is sitting on a goldmine of music history, primed and ready to gift it to the community that left it in his care. There’s a certain eloquence in this gesture, one that’s paired with generosity — it’s like Tuft is turning his mind inside out and leaving us all with a museum full of his memories.

But, that’s a project for another day. Today he’s doing what he loves most — playing some of his favorite folk songs with his friends, humbly arranged in the small, condo living room, performing to an intimate crowd of one.

The list of songs to rehearse is long, taking up a whole page in bold, 16-point font. Hayden and Stanesco make a humble request that it be whittled down, “by next week,” so they can focus in before the show. Tuft willingly agrees and laughs, “It sure is easy to say yes to something,” he says, trying to brush off the seemingly daunting deadline.

With no better way to cut it down than to start playing, the quartet begins with a 1920 Bill Murray tune “I’ll See You in C-U-B-A,” an old song made new again by today’s freshly opened border. “Cuba where all is happy, Cuba where all is gay,” Hayden and Stanesco sing in an intricately layered harmony, “They drink ‘til they’re blind, blind but nevertheless they’re glad to see you.”

When the music stops, the musicians are still tapping their feet. They are happy playing these songs together, so much so they do it freely and by humble means. Nevertheless, Tuft directs the rehearsal with hawk-like command, interrupting to slow tempos and pose questions about whether Stanesco should sing a bit lower or whether Jones should pluck at his strings.

Watching Tuft direct I was reminded of something he’d said when I first arrived that afternoon, an in-between sort of question that I brushed aside but that was nonetheless startling in its simplicity: “How do you listen?”

“For me,” he says, “making good music is about how you pay attention as the transitory becomes enduring, however that is accomplished.”