While women have a plethora of birth control options at their disposal — pills, rings, implants, intrauterine devices — men have mostly been subjected to carrying condoms in their wallets in case they get lucky. But no more! A new study found a hormonal birth control shot for men that is nearly 96 percent effective for continuous users. Holy cow! Great news, right?

The study, which was tested on 320 men in monogamous relationships, was cut short due to horrifying side effects. Twenty of these brave, courageous, manly men just couldn’t take it anymore and dropped out. These side effects included: injection site pain, varied libido, acne, muscle pain, depression and other mood disorders. (It also should be noted that researchers believe that almost 40 percent of these symptoms had nothing to do with the shots.)

After these results were released, all women who’ve taken birth control let out a collective, sigh, then asked, “Yeah, uh, and your point is?”

Since 1960, when the pill was first introduced, women have had to combat these symptoms. Plus the symptoms of possessing the female reproductive system, including but not limited to: menstrual cramps, sore breasts, shedding the uterine lining one week out of every month, and higher risks of breast and/or uterine cancer. Oh, let’s not forget that small, annoying side effect of having to endure the patriarchy not taking them seriously because it’s “their time of the month.”

So sorry dudes, we don’t buy it. Woman up and grow some ovaries. 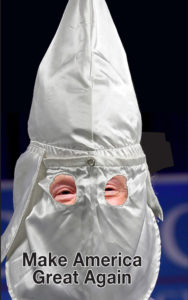 It took a hell of a long time, but Donald “I’m as crazy as my hair” Trump has finally gotten an endorsement from a newspaper. Not just an endorsement, The Crusader went all out in its praise for Trump and his platform. It even dedicated its front page to the now infamous Trump slogan “Make America Great Again.”

The paper then went on to finally explain what the hell that slogan actually means. In his endorsement article, Pastor Thomas Robb wrote, “‘Make America Great Again!’ It is a slogan that has been repeatedly used by Donald Trump in his campaign for the presidency … You can see it on the shirts, buttons, posters and ball caps … But can it happen? Can America really be great again? This is what we will soon find out … While Trump wants to make America great again, we have to ask ourselves, ‘What made America great in the first place? … The short answer to that is simple. America was great not because of what our forefathers did — but because of who our forefathers were. America was founded as a White Christian Republic. And as a White Christian Republic it became great.”

Did we forget to mention that The Crusader is one of the more prominent publications of the KKK? Congrats on getting that first endorsement, Donald. We’re sure others will come flooding in now that one of the nation’s more influential publications is standing behind you. 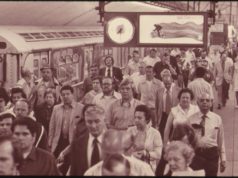 We are the Forgotten