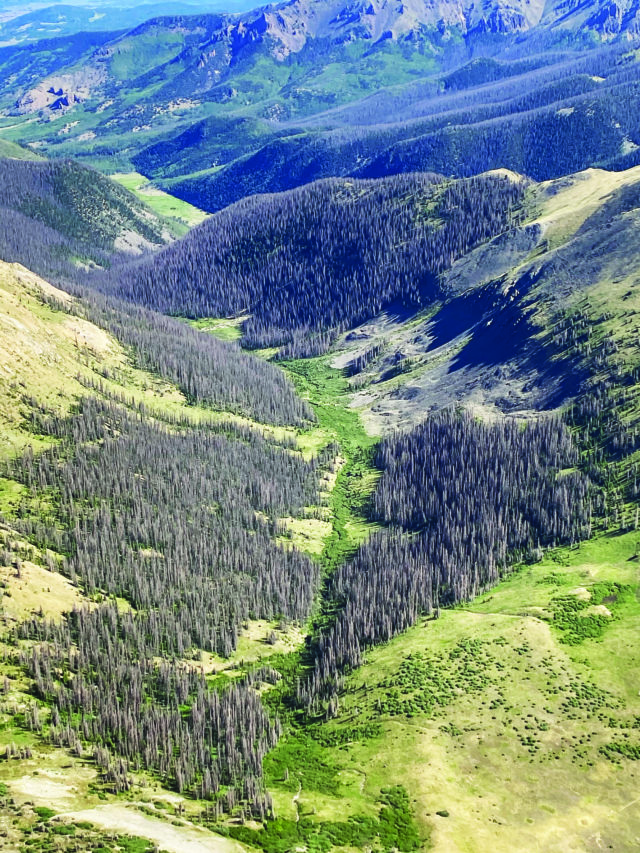 The drone of the small propeller airplane is loud enough to scatter birds from the branches. The aircraft flies low over the treetops, up one side of a mountain drainage and back down, across, over and up the opposite side. Within the plane, Colorado State Forest Service (CSFS) surveyors glance back and forth, from the window to tablets in their laps, down at the forest, and again back to the screen. They swipe and press buttons, typing, identifying and making note of the trees below, what species they are, and what pests or diseases might be affecting them.

Every year they fly over all 24.4 million acres of Colorado’s forests like this, according to Dr. Dan West, an entomology program specialist with CSFS. He says it isn’t a job for anyone who’s prone to motion sickness, but it’s essential for managing the state’s forest pests and tree populations in the face of an ominous-looking wildfire season.

“The goal of the survey isn’t to identify Mrs. Smith’s apple tree [from the air],” West says. “The goal is to really key in on areas where we’re noticing some kind of forest disturbance and then we can get a spatial bound on that.”

As West puts it, the annual aerial survey helps the Forest Service understand the scope of threats.

“It all boils down to using the right tool for the right job,” West says.

The Department of Agriculture’s (USDA) annual aerial detection survey is led by the U.S. Forest Service, Rocky Mountain Region, and CSFS. By monitoring native tree pest populations, Colorado’s land managers can better maintain healthy, resilient forests while still providing timber, wildlife habitat and recreational opportunities on both public and private forest lands. And this year, for the 10th year in a row, the survey found that Colorado’s most deadly forest pest held its position at the top of the list: Dendroctonus rufipennis—the common spruce beetle.

“Trees are really drought stressed and bark beetles are—I don’t want to say ‘having their way’—but for the most part, they have very little impediment to continuing growing their populations,” West says.

The environmental factors are perfect for these insects right now, he explains. As drought worsens and temperatures rise, trees have less ability to fight off spruce beetles, who lay eggs beneath their bark, reproducing extensively, and spreading to more trees. It’s a negative feedback loop that’s amplifying wildfire risks across the state.

Many Coloradans will remember the pine beetle outbreak that dominated headlines through the 2000s and into the early 2010s. Officials described that outbreak as “catastrophic,” with pine beetles killing over 500,000 acres of lodgepole pine forests multiple years in
a row.

Since 2012, though, the spruce beetle has outpaced the pine beetle, which is likewise devastating Colorado’s forests at alarming rates. According to the report, in 2021 alone, spruce beetles affected 53,400 acres of high-elevation Engelmann spruce forests. Since 2000 the total affected area is estimated to be more than 1.54 million acres. That’s been slowing down somewhat in recent years, the report notes—but we’re still losing a lot of spruce trees to these beetles.

And until the state gets more moisture, the trees will remain vulnerable.

“Trees defend themselves primarily through resin,” West explains. He likens an arboreal immune system to a series of garden hoses called resin ducts, running along the inside of the bark within the phloem layer. That critical layer moves carbohydrate sugars produced by photosynthesis in the needles down into the roots, and transports water up from the roots to the needles. The phloem layer is where bark beetles want to go, West says; to feast on free carbohydrates and lay eggs.

“In years where there’s not a lot of water, there’s not as much resin within those resin ducts, and so [the beetles] have less resistance to get into the phloem layer,” West says. “The larva that hatch [there] are severing that floam layer … so [the trees] can no longer get food to their roots and they can no longer move water up into their upper portion of their crown.”

Then the tree dies and dries out; its needles fall off, its roots decay underground, and eventually the trunk comes crashing down and the forest floor becomes thick with dead timber—tinder—and the bark beetles move on in even greater numbers.

“Should lightning strike or a human throw their cigarette butt out a window, then you end up with a source and a lot of fuel,” West says. “I wouldn’t say that it’s more likely to cause a fire. It’s just that certainly, should a fire occur, it becomes more intense.”

It’s contributed to a run of dramatic wildfire seasons that have left hundreds of thousands of acres of Colorado’s forests scorched in their wake. The Pine Gulch Fire burned almost 140,000 acres. The East Troublesome fire burned another 193,812 acres. The Cameron Peak fire burned 208,663 acres. That was all just in 2020. In 2021, Colorado lost another 42,000 acres to wildfire burns.

As wildfire season starts creeping into spring and winter, the need to mitigate these risks is growing by the season, according to Colorado Division of Fire Prevention and Control director, Mike Morgan.

“Colorado’s core fire season is now an average of 78 days longer than it was in the ’70s,” Morgan said in a press release encouraging Coloradans to prepare for intensifying wildfires.

While spruce bark beetles aren’t the root cause of Colorado’s wildfires, they’re certainly a contributing factor—and they’re starting to reach unnatural population sizes. Only two things naturally kill bark beetles: fire and extremely cold temperatures lasting extended periods of time (-30 F or below). Obviously, we can expect the former, but the latter is an extremely uncommon occurrence in this state. And as Colorado’s current drought continues, spruce beetles will continue to spread through our forests.

But, it isn’t all doom and gloom, West says. Forest managers do have methods for fighting the beetles. Or, as West puts it, “tools in their toolbox” for slowing them down and directing their spread.

They gather the data from the air, discerning where the worst outbreaks are, the direction the beetles are moving, whether that’s on private or public land, and then assemble a plan for managing the forest. Sometimes that means going in and preemptively protecting existing trees by cleaning out dead timber. Or, it could also mean waging chemical warfare against the invaders.

“Bark beetles use chemical compounds to communicate. They can’t see very well,” West explains. “They don’t talk to each other, but they’re incredibly adapted to using chemicals.” The insects’ olfactory senses are surprisingly keen and based on the different chemicals they excrete, they help guide each other to the best trees.

“We’ve learned that we can synthesize those compounds,” West says. “It’s using the communication signals against the bark beetles themselves to say, ‘Hey, this tree is not good, it’s becoming full, you need to go elsewhere.’”

CSFS can then lure the beetles into a specific area, like an aspen grove or a large meadow, where they won’t have a source of food. West says they can also use chemicals to make spruce trees smell like non-hosts (like maples or oak trees) to confuse the beetles and get them to move on and away from the most vulnerable areas.

“We can make these trees less desirable for a couple of years to get us out of the outbreak, and then we can figure out what we want to do long term,” West explains.

All that said, spruce beetles are native pests and serve an important ecological role. West calls them “sanitizers of the forest” as they deplete the biggest trees with the most carbohydrates and then leave the rest untouched for future seasons. They help shape the forest structure and composition, and influence the forest’s productivity and biogeochemical cycling. West says that eradicating them entirely would be detrimental to Colorado’s forest ecosystem.

“So it’s all really just a matter of trying to learn to live with them and learning how to make our forests more resilient,” West says. “That’s our job.”