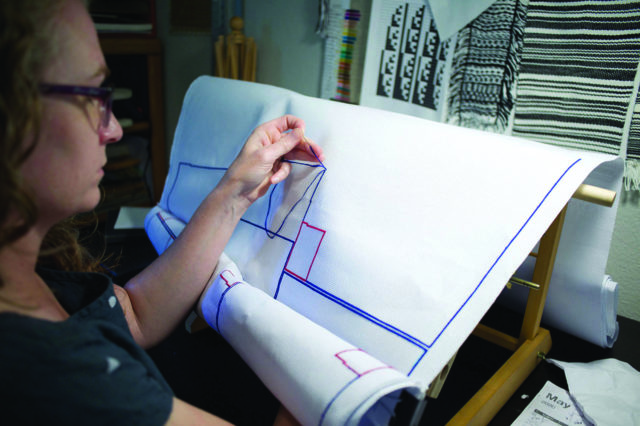 Take a tour of Heather D. Schulte’s studio. Born and raised in Nebraska, Schulte received a BFA with honors from the University of Nebraska-Lincoln in photography in 2003. After moving six times in 10 years, and welcoming three children to the world, she and her family settled in Boulder in 2018. Her work has since been featured in exhibitions at RedLine Contemporary Arts Center, and Loveland Museum, among others. She currently works out of her home studio in Boulder. To access the Virtual Studio Tours live, log into your Instagram account, then navigate to BMoCA’s profile and click on the circular icon with BMoCA’s logo.

Join Viennese-born, Boulder-based choreographer Robert Sher-Machherndl, of Lemon Sponge Cake Contemporary Ballet, and Cleo Parker Robinson for a lively conversation regarding Sher-Machherndl’s upcoming company commissioned work, BLACK ANGELS. This commission began just before COVID-19 hit, and is now being successfully rehearsed outside and on a virtual platform. Enjoy this insightful event with the opportunity for audience members to participate, ask questions and interact.

Catch the last two of four live-streamed shows by indie pop band Lucius on July 23 and 30 to promote small businesses facing financial hardship. A portion of ticket sales will go toward Boulder Theater and Fox Theatre’s staff fund when you purchase tickets through links listed above. Each stream will be available for 72 hours following the performance, for those who aren’t able to attend the live show.

Be sure to grab a bag of popcorn, turn the lights down low, and tune into Colorado Conservatory of Dance’s (CCD) YouTube production of Summer Moving Project. See incredible new works by world-renowned choreographers Dominic Walsh, Alex Ketley, Garrett Ammon and Sarah Hillmer. Also on the bill are world premieres by CCD faculty: Michael Hinton, Page Jenkins, Kerry Healy, Morgan Sicklick, Sophie Robinson and more. This one-of-a-kind performance gives audience members the chance to witness the emergence of the next generation of great American dancers. Tickets are on sale now for $19.95 per household. The link will be emailed two hours prior to the performance time.

Live from Stewart Auditorium, singer/songwriter Megan Burtt will enchant audiences during this livestream with her take on folk and Americana. Raised in the Rocky Mountains, Megan now splits her time between Brooklyn, Denver and the road. Megan is currently in the studio working on her third full-length solo record. This concert is free. Visit Longmont Museum’s Facebook page at 7:30 p.m. on the night of the show and click on “videos” to join. Learn more at longmontmuseum.org or call 303-651-8374.

Go behind the scenes with the Boulder Philharmonic’s favorite piano duo, Greg Anderson and Elizabeth Joy Roe. The virtual event will begin with a “musical mixology” lesson from Anderson and Roe as they detail the creation of original, music-inspired specialty craft cocktails. Conductor Michael Butterman will lead a chat after the show to discover the inspiration behind the pair’s electrifying music videos, song choice and composition. You may choose to add a delightful assortment of hors d’oeuvres and a cocktail mixer delivered to your home. Tickets: $30. Delivered hors d’oeuvres: $20. Zoom login information will be shared with ticket purchasers.

Hazel Miller has been a sought-after performer in Colorado for the past 25 years. Blues, jazz, pop and gospel are all a part of Miller’s repertoire. Catch Miller from the comfort of your own home with this virtual event from Downtown Boulder, live from Pearl Street Mall. Direct links to the livestream will be available at bandsonthebricks.com by 6:50 p.m. on the day of the show. Questions? Contact events@downtownboulder.org.

This special online series of events will feature unique performances from the past 10 years of the Vail Dance Festival, including debuts and revivals that have only been seen in Vail, a world premiere choreographed by Bobbi Jene Smith made in, and for, the virtual space, plus a range of educational programming including Passing Balanchine On with Heather Watts and Damian Woetzel, and Conversations On Dance with Rebecca King Ferraro and Michael Sean Breeden. The festival will be available for a limited time on the Vail Dance Festival’s YouTube and Facebook channels.

When Jack Warner previewed The Breaking Point in the summer of 1950, he knew he had a hit on his hands. And with good reason: The director was Michael Curtiz, Warner Bros.’ top man with hits like Casablanca, The Adventures of Robin Hood and Mildred Pierce. The star was John Garfield, a New York method actor with a handful of moody, noir-soaked post-war performances under his belt. The femme fatale was Patricia Neal, an icy hot blond who sent shivers of electricity through every scene. The script was drawn from Ernest Hemingway’s To Have and Have Not, and screenwriter Ranald MacDougall somehow managed literary fidelity while improving upon the original. The movie was a classic ready for its close-up.

But when Garfield’s name turned up in Red Channels: The Report of Communist Influence in Radio and Television, all bets were off. Warner buried the movie and kept it from rerelease. Garfield was essentially blacklisted and put under heavy strain from both the government and a Hollywood establishment trying to make good. The stress was too much, and on May 21, 1952, Garfield’s weakened heart gave out. He was 39.

Garfield was no communist. He was, in his words, “A Democrat by politics, a liberal by inclination, and a loyal citizen of this country by every act of my life.” It didn’t matter, Garfield’s wife, Roberta Seidman, had been a member of the party years prior (she had hopes of getting workers better working conditions), and everyone knew Garfield was staunchly anti-racist. That was enough to make people smell pinko back then. And considering The Breaking Point features one of the most even-handed relationships between a black and a white man (Juano Hernández and Garfield respectively), it’s no coincidence that this was the movie Warner buried to appease a center-right public.

Thankfully, nothing ever truly disappears, and on July 25 and 26, TCM will broadcast The Breaking Point as part of the ongoing Noir Alley weekly series — appointment television at its best.

Hemingway was one of the few who did see the movie on its initial run, and loved it, telling anyone who asked that it was the best adaptation of any of his work. Probably because The Breaking Point is an honest depiction of working men and the endless array of traps waiting to trip them up. And probably because Warner Bros.’ previous adaptation of the novel, starring Humphrey Bogart and Lauren Bacall, kept the title and the boat and pitched the rest.

Or maybe it was because Hemingway was friends with Neal, who excels here as femme fatale Leona Charles. She’s great, but Phyllis Thaxter, playing Harry’s wife, Lucy, practically steals the show. Her scenes are the best in the movie, and some of the best domestic scenes in cinema history. You don’t often see a husband and wife on equal footing like this, nor do you see it this sexually charged.

The Breaking Point could have been big, but it wasn’t. It was tossed out with the garbage along with Garfield’s corpse. History can be cruel like that. But a good work is a good work, and, on a long enough timeline, the cream will always rise to the top.