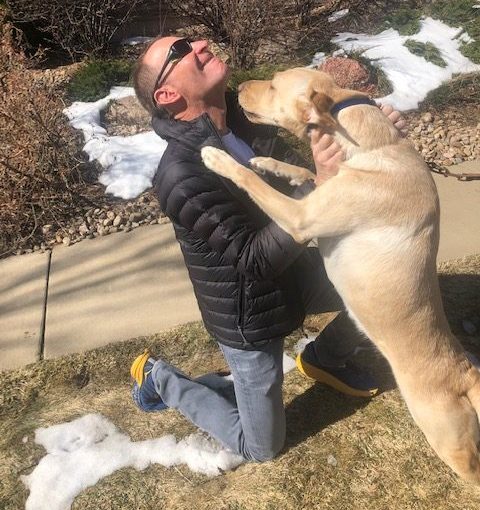 Courtesy of Guiding Eyes for the Blind

The day the stay-at-home policies were announced in Boulder, Michael Stone was at Whole Foods. He had his new 2-year-old yellow lab, Geo, with him and they were nine days into training with Guiding Eyes for the Blind. But as he was waiting for Melissa Smith, the field rep who was facilitating the training, she called to say she wasn’t coming. In-person contact was no longer advisable.

“I was completely and utterly panicked,” Stone says, knowing he somehow had to get from Whole Foods, to his physical therapy appointment back to his cycling shop, Colorado MultiSport on Canyon Boulevard. He took a deep breath and the team started out.

“And all of a sudden I got extremely emotional because I realized that I had been walking through these streets with such a degree of fight or flight and under so much stress just getting around town,” Stone says. “You learn to really bond with your dog quickly when you see what they’re doing to keep you safe.”

It took Stone a long time to warm up to the idea of a guide dog, afraid that it would mean just another loss of independence. The endurance athlete has competed in more than 200 races, including 17 Ironman competitions, over the last 20 years. He’s an avid cycler and trail runner when he’s not racing, even as he’s had to adapt to gradual vision loss due to a degenerative eye disease.

“With any kind of physical challenge, you become very weary of giving up more of your independence,” Stone says. “The idea of having a dog to me meant more dependence, not greater independence. And I couldn’t have been more wrong. She’s a ticket to independence.”

After years of resisting, Stone was inspired by friends and colleagues, people like Thomas Panek, the president and CEO of Guiding Eyes for the Blind, for example. The New York nonprofit trains dogs as companions for people, and it is the only program in the world that trains running guide dogs. Panek ran the New York City Half Marathon in 2019 with a relay team of guide dogs, and it was on the trails where Stone says he first really noticed he needed a guide. Living in Dakota Ridge, Stone has been running the trails in North Boulder solo for years. But as more and more people moved to the area, that all has changed.

“There’s a lot to navigate. In the old days when it was just me out there, it didn’t really matter as much, but now it’s heavily trafficked,” he says. “Every day, even the easiest runs were becoming treacherous. I was having all these close calls and I realized that I needed [help].”

On Sept. 8, 2003, Stone was first diagnosed with retinitis pigmentosa, which causes most people to lose their peripheral vision first, slowly moving toward the center. For Stone, his central vision was the first to go, and the disease has been working its way out ever since.

“Nothing that can slow it or stop it,” he says. “Basically everything is dependent on how much light and where the light is. The brighter it is, the less I see. I can see close distances and movement at very close distances so we’re talking about a few feet. And that’s generally in an inside controlled environment; outside it becomes a lot less and that distance just seems to be getting shorter and shorter.”

The diagnosis was not necessarily a surprise, as Stone had been struggling with his vision since he was about 5 years old.

Stone grew up in Chicago, where he says he was terrified of team sports even though he desperately wanted to play. He had a hard time following the ball, once even getting hit in the face with a pitch while attempting baseball.

“People just kind of took me as uncoordinated,” he says. “It’s always funny that I’m linked with these super humans that live in Boulder that are Olympians and professionals, but that’s not how I see myself. People assume that I’ve been kind of a jock my whole life and one of those uber athletes. The truth is I identify more with beginners and people who don’t have a tremendous amount of confidence.”

As a kid, he buried himself in music, eventually becoming physically active through martial arts, skiing in Colorado with his family and rock-climbing, which brought him to Boulder in 1997. Once he got here, he says, he quickly adapted to the athletic lifestyle, purchasing his first bicycle within a month. His first running race was the 2000 Bolder Boulder.

“It was a game-changer for me,” he says. “I’ve done over 200 races since then; nothing compares to that experience.”

From there, Stone picked up swimming, quickly becoming a triathlete and competing in his first triathlon in 2001. It was during his first Ironman, six months before his diagnosis, in New Zealand, that his vision problems caught up with him, and he missed a turn in the middle of the race.

“I remember the marshal in his awesome Kiwi accent, said, ‘What are you, blind?’,” he says. “And I became really concerned because, for whatever reason, I didn’t see him and I either went straight or left when I should’ve gone right.”

By that time, he had already given up skiing (navigating the trees was too difficult) and rock climbing (discerning holds on varying shades of rock became impossible). He wasn’t going to give up triathlons as well.

“I learned how to compensate, and I was kind of like the Forrest Gump of the vision-impaired world. I just kept on doing it,” he says. “I wasn’t particularly aware of how I was riding a bike or running or swimming. I just sort of railed my way through things and to some degree still do.”

But the vision loss has kept progressing, exponentially, which has huge consequences for Stone and his athletic lifestyle.

In 2013, for example, he was racing an off-road triathlon (Xterra) in Beaver Creek when he began bumping into things on his left side, quickly becoming aware of his deteriorating peripheral vision. Now, he’s basically lost all functionality in his left eye and the right one is quickly catching up to it.

Since then, he’s mostly raced with human guides, people giving him audible clues to properly navigate courses. For the Ironman and two half-Ironman races he’s competed in more recently, he has to be tethered to a guide and ride a tandem bike, which he doesn’t particularly enjoy.

This year, he began Nordic ski racing, competing in the Alley Loop in Crested Butte at the beginning of February. He had plans to also race the American Birkebeiner at the end of February and even his first biathlon, but the coronavirus has cut his season short. Not only were some of these events canceled, he also found out he was finally getting Geo after nearly two years of waiting and he didn’t want to do anything to jeopardize it.

“I did not want to take any chances of getting sick and then not being able to get her,” he says.

Stone got Geo at the beginning of March, already well-trained.

“She came to me with nothing but skills and I was the ultimate neophyte. It was me that needed to be trained,” he says.

With her guide harness on, Geo can navigate Stone through city streets and mountain trails, adeptly assessing the current situation and adapting in a split second. He used to stick to routes he knew well, but now there’s more freedom to explore other parts of Boulder with Geo’s help. Whereas before, he might wait for several cycles at a stoplight to make sure it was safe for him to enter the crosswalk, now “all of a sudden I’ve got this dog that says, Nope, we’re going.”

And she moves fast, keeping pace at about four miles an hour when she’s walking and running a seven-minute mile, Stone says. On the trails, Geo’s trained to run on the left, against traffic so to speak, so that she can easily navigate around other hikers going in both directions. And she guides better than auditory directions from friends, Stone says.

But on a normal day, Stone says, he walks about 10 miles from his house to his bike shop and running errands around town. Geo needs to have energy for all that, so he tries to space out running with her, giving her breaks when he can find friends to run with instead.

“I want her to have a long, healthy life,” he says. “In the end, we’re a team so I certainly don’t want to run her into the ground.”

The plan was to celebrate the 20th anniversary of his first race by running with Geo at this year’s Bolder Boulder over Memorial Day, but the event has been rescheduled for Labor Day for now. Regardless, Stone hopes to start racing with Geo soon.

“It’s been humbling and illuminating all at the same time,” he says. “It’s amazing putting all your trust into these four-legged wonders in an effort to become a six-legged team.”