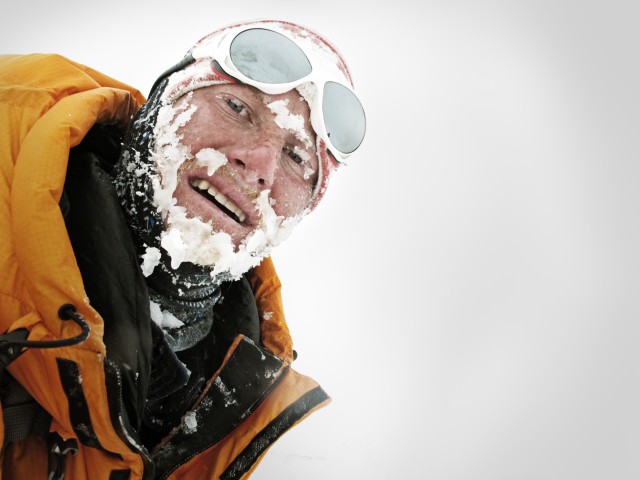 Not so very long ago, Cory Richards was among those climbers who considered a borrowed floor a suitable bed and scratching out a living by photographing climbers just a dream.

“It was a really odd and alarming transition from being sort of a dirtbag and living on floors and in my car and being late on rent to having a wife and a house and a career that I’ve worked for for a decade that was finally working out, not just as a photographer, but as a climber,” Richards says. “It seems like there was a rising tide or a gathering wave that finally is beginning to crest — which is really cool.”

His house in Boulder has been more a mailing address than a shelter from any storm; over the two years he’s lived here, he says he’s spent less than 11 months in town.

Last year, Richards became the first American to top an 8,000-meter peak in winter when he summited Pakistan’s Gasherbrun II with Denis Urubko and Simone Moro. The film footage he shot during that trip became the acclaimed documentary Cold, and the photos from that trip became his first National Geographic feature story. On March 18 he’ll take off for his second: an attempt at the summit of Mount Everest via the West Ridge, the route an American team completed in 1963 that has not since been repeated.

When the article he’ll shoot for National Geographic this summer runs in 2013, it will be in celebration of 50 years of Americans on Everest and 125 years of National Geographic.
Richards will be climbing with Conrad Anker, a mountaineer who has completed first ascents in Antarctica and, in 1999, found the body of George Mallory, who famously quipped “Because it is there” when asked why he wanted to climb the world’s tallest mountain. He disappeared with his climbing partner Andrew Irvine in 1924 during an attempt at its summit.

What we know about the West Ridge route comes from its first ascensionists, Willi Unsoeld and Thomas Hornbein of the 1963 American expedition. The pair completed the route while another American team, Lute Jerstad and Barry Bishop, worked its way up the standard South Col route. Both teams were forced to bivouac overnight on the mountain without tents or sleeping bags, and would lose 19 toes to frostbite.

In Hornbein’s narrative of the events, recorded in the book Everest, The West Ridge, he wrote, “We would rather try the unknown and fail than risk being successful on what [had been] dubbed ‘the old milk run.’” To his wife, he wrote that she should not be surprised or disappointed to see his name among the missing “in the clippings.” (Richards’ wife won’t have to wait for newspapers to deliver any news; she’ll be accompanying him to base camp.)
“Do not feel I will be missing fulfillment,” Hornbein assured his wife, “for whether or not I find it on the West Ridge, I know it does not lie in wait as the 9th, 10th, 11th, 12th or even the 1st American to climb Mount Everest by the South Col.”

Richards has echoed the ethos of that first ascent, and says he and Anker would rather attempt the summit in a way that presents a true challenge than bag a sure ascent. And he will leave behind the oxygen that would greatly increase the chance of success on the peak.

“I think for Conrad and I, the way we’re doing it is so different, and it’s so important to say that, but at the same time, to most people, it doesn’t matter,” he says. “Most people don’t care. It’s like, ‘You did Everest? OK.’ They don’t care how you did it. You did it without oxygen, you did it with oxygen. They don’t know the difference, and I think it’s important to educate people in the differences in the way mountains are climbed, because one speaks to a desire to exercise a creative and adventurous muscle, to figure out how to tell a story of real adventure, real exploration. And one method of climbing speaks entirely to ego and a desire to say that you’ve done something, but I’d rather fail trying to do something well than succeed doing it poorly.”

Initially, the Everest experience will share little with Richards’ time on Gasherbrun II — base camp is a more social setting, there’s more infrastructure and it’s a different time of year.

“But the climb itself, the final climb, will be pretty similar, hopefully, you know, blasting off into sort of the unknown, no people, just us,” Richards says. “Yeah, I’m excited about it.”

He’s been asked if he’ll make a film about this trip, too, and says the video camera will come along, but it’ll be the experience that determines whether there’s a movie to be made.

“I think really good films are based on really good stories and I want the story to be generated organically versus trying to build something around an experience,” he says. “The goal will be to have enough content to create something if something happens, if there is a good story that comes out of it.”

And while, yes, climbing Everest with Anker, who recruited Richards to The North Face’s team of photographers, and shooting for National Geographic does feel like a step into the big leagues, over time, Richards’ sense of what matters has evolved. What mattered at the beginning of his career, like finally getting published in Patagonia’s catalogue, isn’t the point anymore.

“I think it’s a fallacy that that recognition is actually worth something, it’s really not,” he says. “I think people oftentimes view it as sort of a reward for their efforts, and I think that ultimately the reward for your efforts is inherent in the experience versus recognition for it.”

So perhaps we’ll just shrug off Richards’ selection by National Geographic as one of their Adventurers of the Year for 2012.

This trip is far more than a flag-waving mission, Richards says, both in the going — this daring route without oxygen — and in what they’ll bring back: curriculum for fourth and fifth graders on climate change and how it has visibly affected Mount Everest. This year, Montana students will follow the trip in real time and, if the curriculum goes over successfully, it will be shared nationwide.

“You’d be amazed at how much adults either misunderstand or simply have never learned or just forgot, and that level of earth sciences or that level of science literacy is super, super vital in helping everybody understand how the earth is actually changing right now,” Richards says. “Everest is a really great vehicle to tell that story just because it is adventure, it is the highest mountain in the world, it will always be Everest, so it gives you a great platform. And it’s also a place where you can actually observe the changing environment. You can see the glaciers deflating there. You can see the earth radically changing pretty much before your eyes.”

As a photojournalist, he says, it’s important to leverage his power to show people those images.

“Does climbing change anything? Does it in and of itself create any good social change? No, not at all, it’s a totally selfish pursuit. I fly on big airplanes over the ocean many times every year and I basically put a huge carbon footprint onto the environment,” he says. “But if I can inspire one person, not necessarily to climb mountains, but to observe nature in a certain way, to want to preserve it, then I’ve done some sort of tangible good.”

Climbing is the outlet for his demons, he says, but photography is the outlet for his need to tell stories. His sense of himself as a climber, photographer and storyteller (and perhaps, someday, though he doesn’t yet claim it, a filmmaker) are inseparable. And his feelings toward them are similarly layered; the same task may both always and never feel like work.