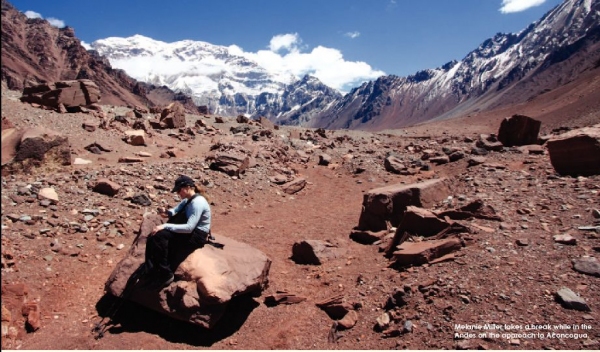 Miller will summit and ski Denali for G Movement, Action Against Hunger

A first glance, Melanie Miller seems like the typical Colorado athlete. She’s skied every major mountain around, and she’d tele in the backcountry if she has her choice. When asked about her most extreme skiing experience to date, she says, “Seven Springs in Pittsburgh. You’re skiing at night, it’s icy and you’re surrounded by drunkards.” Then she laughs the hearty, infectious laugh that often punctuates her speech.

She even laughs while discussing the scars that spatter her lower legs, dismissing the medical mishaps that would have sidelined the most hardcore of athletes years ago. She’s so used to them that she has trouble remembering what years she got those scars.

“I spend a lot of time at the orthopedic surgeon,” she says, laughing again.

Miller has had surgeries on her ACL, MCL and meniscus on one knee and surgery on both legs to alleviate complications from periostitis and compartment syndrome.

“I still get cramping and charley horses,” says Miller of her injuries, “but nothing that would stop me.”

Nothing seems too tough
for Mel Miller to handle. She balances a job running supply chain
operations, which required her to travel to three countries during her
first month on the job, with a commitment to philanthropic organization
G Movement. Miller is training for an expedition in Alaska where she
and five others will summit and ski down Mt. McKinley (Denali). At
20,320 feet, Denali is the highest peak in the United States and one of
the Seven Summits (the highest peaks on each continent). The round trip
will take about a month — three weeks for climbing and skiing, with
contingency days built in.

Miller
and crew will be climbing the West Buttress route, first traversed in
1951. According to Miller’s description, it’s steep, but not incredibly
technical.

“It’s ice axe, crampons — that type of thing,” she says of the route. “It’s mountaineering, not technical climbing.”

Miller has been climbing at the Boulder Rock Club and outdoors to prepare her body for the rigors of the route anyway.

“It’s
good just to have upper body strength and core strength. It helps with
balance and endurance, and also helps with the pack.”

Miller
backcountry skis and climbs every weekend. She’s also been waking up at
4:30 a.m. to run, bike and go through grueling sessions with a personal
trainer before work to prepare her for the 14-day ascent with a
60-pound pack and 40-pound sled. The group will face increased crevasse
danger due to the season and 45-degree pitches on the way up… and the
way down.

Miller can’t help but smile when she talks about skiing down.

“I’ve
wanted to climb Denali for a while,” she says, “and since I love skiing
more than anything, I saw that was an option, and I finally decided to
do it last fall.”

G
Movement selected Miller to be one of five athletes to receive a $2,000
grant to train and gear up for her trip. Miller, in turn, also raises
funds for Action Against Hunger. The cause is important to her.

“I
actually worked for Oxfam for a while in Sudan and Sri Lanka, and it
was fantastic,” Miller says. “You’re able to see different perspectives
and get a different feel for the humanitarian needs out there.”

She realized that, worldwide, hunger was one of them, but that little was being done in her own country to solve the problem.

“It’s
something that gets glossed over or ignored domestically,” she says. “A
lot of humanitarian issues do, because we’re a developed country. This
was something I felt would make a local impact as well.”

Miller
has raised more than $1,000 for Action Against Hunger while training
for her endeavor. Once she hit that initial goal, she decided she could
do more.

She’ll
also serve as an ambassador for G Movement, submitting video before and
after her trip, talking about the organization and continuing her
fundraising efforts.

Miller says she has support from her family and friends during the process.

Maybe
it’s because trips like these come with the adventurous spirit Miller’s
always exhibited. The Pittsburgh, Pa., native attended school in Ohio
and lived in Cleveland for 10 years before moving west to heed the call
of the mountains.

In
addition to backcountry skiing, Miller’s also interested in climbing.
She counts climbing the Seven Summits among her future goals. She’s
already summited Elbrus (Europe) and Kilimanjaro (Africa). Miller made
several attempts at the summit of Aconcagua (South America) in February
of this year, but was forced to turn back due to poor weather
conditions. She’s determined to go back to Argentina to finish what she
started and to bring in a philanthropic aspect as well, similar to her
current work with G Movement.

“I like the link of some sort of benefit other than my own suffering-slashenjoyment, so it’s good.”

Again, she laughs. The pain is worth the pleasure of helping others… and the ski back home.

If
you’re interested in contributing to Mel Miller’s fundraising efforts,
you can visit her G Movement profile at www.
actionagainsthunger.org/g-movement/melanie-miller.