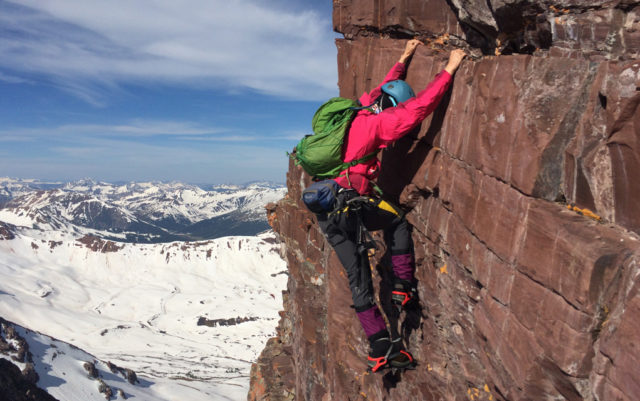 Driving up to Independence Pass for a day of climbing this past September, I gripped the steering wheel with a sense of nervous anticipation. My partner for the day was Amy Gray-Smith, a climber I’d never met. The night before she’d sent me a text: “How do you feel about free soloing, Mike?”

Free soloing is climbing without ropes or any safety equipment — just you, the rock and the air beneath your feet. I’d never done any free soloing whatsoever, let alone contemplated it, and now here I was about to do it with a complete stranger.

“Just look for the little, spunky blonde lady parked in a Subaru,” she texted me that morning. “That’ll be me!”

Gray-Smith, 40, is from Aurora, Colorado. Professionally, she has been an ultrasound technician, a bartender, a pilot and a professional duathlete. Though among the most accomplished female alpinists in Colorado, Amy hasn’t always been a mountain climber. Just as she has continually reinvented herself in her professional life, she has transitioned from success to success in different outdoor pursuits, overcoming daunting obstacles along the way.

In the late ’90s, Amy was a full-time student studying Aviation Technology at Metropolitan State College, tending bar to make ends meet while she collected enough flight time to earn her wings. Upon graduating in 2001, she spent several years teaching students to fly Cessna 172s, and in 2004 met her husband Marc, also a pilot.

Though she had always been a runner, routinely competing in 5 and 10ks, it was when she met Marc that she took up biking, setting her on a whole new trajectory.

She dabbled in triathlon, but it was the one-two punch of biking and running where Amy really excelled. She decided to focus on duathlon, and quickly rose to the top ranks of the sport. After winning an event in 2006, she placed in the top 10 at the National Championships in Charlotte, North Carolina, thereby qualifying her for Worlds in Rimini, Italy.

“That was horrible,” she groans. She decided to rent a bike for Worlds rather than lugging her own rig across the Atlantic. “I learned an important lesson that bike fit is absolutely key at that level,” she says. As if riding a rental bike wasn’t disadvantage enough, Gray-Smith also got food poisoning before the race.

“Despite all that, I placed 22nd in the world,” she says.

After returning from Worlds, Amy pulled a double-switch: She began focusing purely on biking, and she decided to go back to school to become a sonographer (an ultrasound technician), as she was tired of being couped up in a cockpit all day.

As a Category One Cyclist (one step below professional), she quickly began racking up victories like the Pike’s Peak International Hill Climb and the State Hill Climb Championship. But winning came at a cost. In 2009, Amy put competitive racing behind so that she could focus more on her career as a sonographer, but also because she was tired of the unavoidable crashes and serious injuries that accompanied them.

“I had a big crash in Salida, Colorado,” she says. “There was an entanglement in the last corner, a quarter-mile from the end. I had severe bruising and road rash.”

Amy didn’t hang up the bike and become idle, though; she pivoted. Instead of racing, she took her bike into the mountains. She mountain biked to the top of multiple 14ers, Mt. Elbert and Mt. Evans among them — the latter in the dead of winter.

The mountains opened up a whole new world for Gray-Smith, and led to arguably her biggest project to date. She has already summited all 58 Colorado 14ers at least once, but over the past two years she has made it her goal to climb all the them in winter — a formidable feat. Only one other woman has done so previously.

Always looking to up the ante, Gray-Smith started rock climbing in hopes of completing some of the more technical routes on the 14ers. She found a mentor, a friend of a friend named Bob, to show her the ropes.

“I learned to climb wearing his shoes — which were too big for me — at Lookout Mountain,” she says. “And I fell in love with it instantly.”

Gray-Smith is quick to give credit to Bob and a couple of subsequent mentors for having helped shape her into the accomplished, safe and ambitious climber she has become. Her second mentor, Tony, turned her on to free soloing. She trekked up to Spearhead in Rocky Mountain National Park with him in the summer of 2014. Gray-Smith says, “When we got to the base, Tony just said, ‘We’re gonna free solo it.’”

And that was that.

Free soloing is inherently dangerous, but Gray-Smith doesn’t do it just to get an adrenaline fix.

“It takes away from everything that clouds your mind each day,” she says. “All you’re focused on is climbing. I like the simplicity of free solo.”

In August 2015, Gray-Smith was out for a day of rock climbing near Pike’s Peak. Though she was not doing anything particularly risky or dangerous, a fluke accident resulted in a broken foot.

Gray-Smith clearly has a penchant for daredevil, dangerous adventuring, what with her races and crashes, her free soloing and broken foot, and 21-hour solo days in the dead of winter.

“I used to have hair,” her husband Marc says, alluding to the stress his wife’s daring adventures cause him. But even with the inevitable setbacks of her chosen pursuits, Gray-Smith maintains a remarkable resiliency and desire to push herself.

The whole while she was recovering from her broken foot, she remained focused on her winter assault of the 14ers, and started climbing again just a couple months after the injury. She acquired a new mentor named Dave to bolster her traditional climbing skills. At winter’s end in 2016, she was 39 peaks down. The plan was to finish the remaining 19 peaks this winter.

One morning in the beginning of November, Gray-Smith was biking to work as she has nearly every day for the past 10 years when she was hit by a car. She has no memory of the accident due to traumatic amnesia, but it has altered her life and plans dramatically.

Gray-Smith was in the ICU for 19 days. She had multiple breaks in her pelvis, spine, shoulder blades and clavicle, in addition to severe head trauma. She endured daily surgeries in the aftermath of the accident.

When I met her for pizza on Dec. 31, she was in a wheelchair. She can stand, but she cannot walk yet.

“There’s still a long road ahead,” Marc says. She should recover some degree of normalcy in her day-to-day life, but whether she’ll be able to return to the mountains to complete her winter 14ers is anybody’s guess.

I think back to September, standing on the top of a 400-foot-tall buttress that we had free soloed to start our day, Gray-Smith pointing out all the 14,000-foot peaks around us in Independence Pass, peppering in little stories from her various ascents here and there in her typical spunky style.

Up top there, I felt that elation and centeredness Gray-Smith spoke of with regard to free soloing. “You look so happy,” she said to me, snapping a picture of me on her iPhone. Just as Bob, Tony and Dave had mentored her, Amy had begun, consciously or not, to do the same for me.

And despite the challenges ahead of her, Gray-Smith somehow still exudes that singular positivity.

“I think I’ll be back” she says, a fire in her eyes, the will to get up after getting knocked down as she has multiple times before. “I still have mountains to climb.”