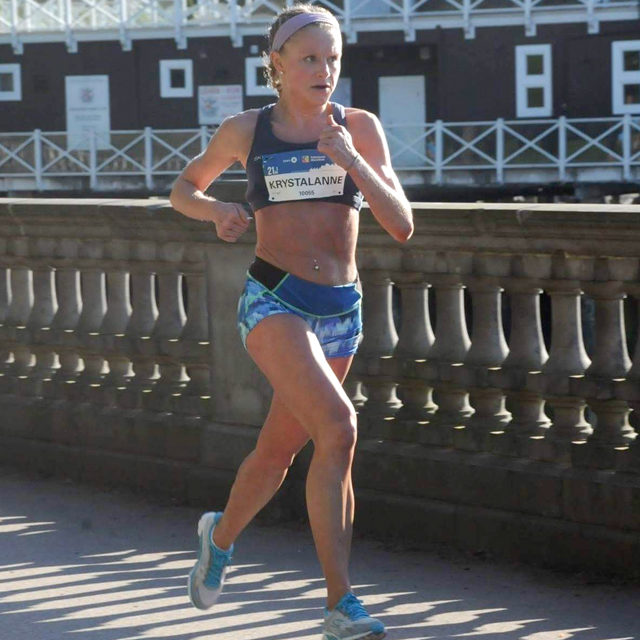 It’s no surprise when Krystalanne Curwood suggests sitting on the patio at The Laughing Goat Coffeehouse on Pearl Street, despite the wind.

It seems reflective of her personality, of her ability to endure.

In August, Curwood was selected as one of 10 finalists for Runner’s World magazine’s annual cover search. More than 1,000 people submitted stories about how running has changed their lives, and Curwood’s rose to the top. The thing is, the Boulder runner has no idea who submitted her name.

Out on Pearl Street, dressed in a pink workout t-shirt with Sketchers, her sponsor’s logo sprawled across her chest, the gold cross around her neck catches the early autumn sunlight. She grew up attending Catholic school, the first place she recalls having to do laps around the gym. She says that for years, this experience left a bad taste in her mouth for running.

That was until the fall of 2012, when Curwood’s dear friend Howie was brutally murdered. The two met through a dance community they were both involved with. On the day of her friend’s funeral, Curwood was let go from her job. Her mother was planning to run the Las Vegas Rock ‘n’ Roll half marathon that weekend, and encouraged her daughter to come with her. She thought it would lift her spirits. Curwood agreed and the two set off for Sin City.

Unlike most races, the Las Vegas Marathon starts in the evening. The entire strip, all the way to Old Vegas, is blocked off for the runners, with room for folks to cheer the racers on from the sidelines.

“That day we saw wounded warriors and challenged athletes, and there was a gentleman who was doing the full marathon lying down, his head propped up on a piece of wood doing the full marathon with his arms,” she recalls. “My mom and I had tears in our eyes, looked at each other and she goes, ‘I have a feeling and I just need you to run. No excuses, just run it.’ And I said, ‘OK.’”

Curwood didn’t understand the technical aspects of running, things like the difference between chip time and gun time.

“I just understood clock and go,” she says. “So I had thought I heard them say go, I’m pretty sure they said go, but I took off and like a half mile in I look back and my mom’s right by me. Nobody else is. At the mile, I look back again, she’s not with me and nobody else is either. My mom had told me to run it, so I thought, ‘I’ll just go.’”

Curwood put her earbuds in and vowed that for her friend Howie, she was just going to go for it. She crossed the finish line, her mother coming in about 10 minutes behind her. It wasn’t until they got back to their hotel room and looked up their times that they realized how fast Curwood had actually run. She came in at 1 hour and 37 minutes. That’s when they realized Curwood really had a knack for this. Five weeks later, she ran the Rose Bowl Half Marathon in Pasadena, California, and was the first female to finish by a full eight minutes. She beat her own personal best time by five minutes.

From there, Curwood began competing in shorter races like 5Ks and 10Ks, eventually deciding she’d made enough progress to tackle full marathons. In 2013, after the Boston Marathon bombings, she decided to run her first full marathon in San Diego, intent on qualifying for the next Boston race.

At the starting line in San Diego, Curwood was tinkering with her music. Her mother, who was there to run the half marathon, noticed her daughter wasn’t paying attention and yelled, “Krystalanne, you’re going in 5 seconds, go!” And without a watch or music she took off for her first 26.2-miler with nary a beat to set her cadence.

“From mile 7 to 23, I had a conversation with three or four other people who were at Boston who were either near the bombing, heard the bombing, heard the chaos or saw the chaos,” she recalls. “It was like, wow, they went through this traumatic experience and they’re back out on the course. As runners, you don’t have anything to protect you. You just have your body and the clothes that you’re supposed to be running in. Everything else is just weight on you so you’re defenseless in a sense. And to see them come back and be like, ‘No, we’re not going to let this win us,’ it just gave me this inspiration and motivation.”

Curwood ended up placing 15th in the females and qualifying for Boston with a time of 3:09:57. Soon afterwards, Curwood was accepted into the USA Cross Country Championships, a collection of the top runners from around the country. Back home she began running with the Boulder Track Club, a local organization founded by three-time Olympian Lee Troop, who would become Curwood’s coach in her journey to the Boston Marathon.

It was Troop who taught Curwood what running was really about. After she placed third at the Cherry Creek Sneak’s 10-mile race without informing her running mates at the Boulder Track Club, Troop called her out in front of the club.

“At that moment I was like, ‘You’re my coach. I like this,’” she says. “It keeps you accountable and it makes you realize you are representing your team, the people that you are with, and that you’re representing not only a brand but yourself. You’re respecting and keeping yourself accountable to your teammates, you’re being a good person. That’s what he was teaching us.”

With Troop’s guidance, Curwood decided to make an attempt at qualifying for the Olympic trials, just a little more than a year after beginning her competitive distance running career. She worked hard in preparation for the California International Marathon (CIM), a net downhill race following a historic gold miners’ run through Sacramento. The CIM is a qualifier for both the Boston Marathon and U.S. Olympic Trails Marathon.

Despite her work, Curwood fell short of the Olympic qualifying time by a couple of minutes. It was the first time she’d missed qualifying for a race since she began running competitively.

“I was devastated,” she admits. “And a lot of people don’t know that, but I mean, I played it off. It was hard for me because it wasn’t just about the [personal record] speed. I wanted to show that if you set your mind to something, no matter what it is in life, that you can achieve it.”

An accident on a trail forced Curwood to take some time off, which was difficult for her. She bounced back in April 2015 and was preparing for her second go at the CIM, again with the goal of qualifying for the Olympic trials. At Grandma’s Marathon in Duluth, Minnesota, in June 2015, she ran a personal best time of 2 hours and 54 minutes, but she would have to do better to qualify for the Olympic trails — a full 11 minutes better. She’d need a time of 2 hours and 43 minutes.

So for the six months leading up to the CIM, she trained harder. And when the day came, she started off steady.

She had missed qualifying for the Olympic trials by 6 minutes.

Her dismay grew deeper when just a few days later, USA Track & Field officials changed the Olympic qualifying time to 2 hours and 45 minutes for women, meaning Curwood had missed qualifying by only4 minutes.

“And that’s when it hit really, really hard. I didn’t tell people, but it really did devastate me,” she says.

From December to February, Curwood says she did the bare minimum to keep herself in shape to run, but her heart wasn’t in it. She couldn’t bring herself to watch the Olympic trials. She began to hate running again, like she did when she was running laps in Catholic school. But one morning in February, the weather just right, she set out for a 40-minute run through Eldorado Trail with her music on, her mind off.

“I was coming into the canyon and I stopped, I looked around and I said, ‘This is why I run. It takes you places, it clears your mind, it doesn’t have to be fast, it just has to go.’ And I fell in love with it again.”

With her new coach Kathy Butler, Curwood began adapting a new style, which took her a while. Curwood says that when someone praises her for being “talented,” she’s quick to rebut with a mantra about consistency, dedication, accountability, waking up and not wanting to run but finding the urge buried within yourself to get up and go. She says she hasn’t run a full marathon in 2016 and vows she won’t again until the qualifier for the 2020 Olympic trials. But she’s training with Butler and the rest of the Boulder Track Club, who keep her accountable.

“It’s a tight unity and you rely on them,” she says. “When you get out onto the course or the route that you’re supposed to, you then see the regular runners you always see. You may not see them for a couple weeks, but you see the same faces. And that holds you accountable. Because you realize it’s not just you and the team, it’s the community and it’s about something bigger. And you have a face in the community too. So even though you may feel like they’re holding you accountable, you may be holding them accountable too without even realizing it.”

Curwood kept her forward momentum by running the BMO Vancouver half marathon in May, placing first among runners from the U.S., and fourth among women. She placed 26th overall among 7,134 runners. She again broke her own personal best with a time of 1:16:58, and realized it was basically a minute and a half from the qualifying time for the Olympic trials. This year, Curwood has run seven races total. Her eighth race will be her fourth go at the Las Vegas half marathon on Nov. 13, a representation of her fourth year without her friend Howie, who is in her thoughts every race, she says.

Life’s not only about running for Curwood; she’s a graduate student at Colorado State University, studying criminal justice and behavioral science. Once she leaves The Laughing Goat she’ll head to class, then practice, then work.

Curwood says it doesn’t matter to her who gets the Runner’s World cover, which comes out in December. Back in September, she met and befriended the other nine finalists at a photo shoot in New York City. After meeting them and learning more about their stories, she’s more concerned about getting the group together to run a race sometime next year.

As for the Olympic Trials, she’s taking it one step at a time, just like with any other race.