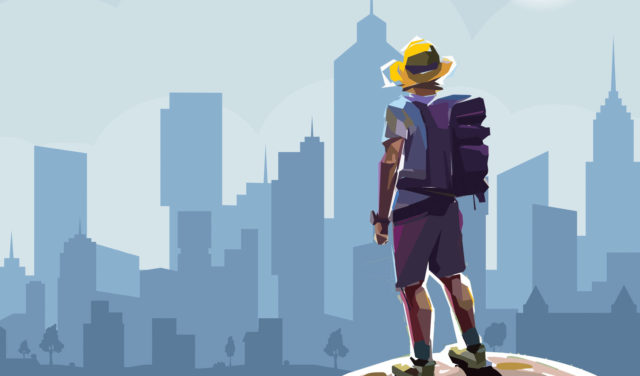 Feeling the dirt under our feet and breathing in fresh air away from traffic while taking in mountain views is a way of life for many (although certainly not all) Coloradans, especially those in Boulder County. But when Governor Jared Polis announced his new “safer-at-home” policy at the end of April, it came with stricter limits on traveling for recreational purposes, encouraging residents to stay within 10 miles from home, preferably within their own communities.

Urban hiking is a growing movement within outdoor recreation circles, thanks in large part to athletes like Liz Thomas, who has become an advocate of the sport in recent years. Thomas is known for breaking the unsupported women’s speed record on the Appalachian Trail in 2011, as well as completing the Triple Crown of Hiking, adding the Pacific Coast Trail and the Continental Divide Trail to the AT and logging more than 20,000 miles across U.S. trails. She’s also traversed cities like Los Angeles, Seattle, New York and Denver, where in 2017 she hiked 88 miles over eight days to visit more than 60 breweries. As Thomas told the Guardian, completing her first urban hike in Los Angeles in 2013 changed her view of hiking. “It sparked something in me in how I thought about being active, how I thought about the urban landscape, and how I thought about how people interact with nature and their bodies,” she said.

But what makes an urban hike different from a walk around your neighborhood?

According to urban hiking pioneer Bob Inman in his book Finding Los Angeles by Foot it’s “about finding what is notable, historical, quizzical and beautiful … while walking. It is about learning and using pedestrian-ways where a car may not go.”

It’s applying the adventurous and curious spirit of hiking in unfamiliar wilderness to streets, sidewalks, alleyways, multi-use paths and even dirt trails within your city.

“An urban hike tends to be something that is less familiar to you,” Kitching says.

In her new guidebook on the subject, The Best Urban Hikes: Boulder, commissioned by the Colorado Mountain Club, Kitching details 22 urban hikes through Boulder, Longmont, Niwot, Lafayette, Louisville and Superior, highlighting the 265 miles of trails between city and county open space systems.

Kitching grew up in Colorado and has hiked most her life, but with a background in urban planning, she’s also an “urban explorer,” someone who loves traveling, enthralled by the concept of place that defines most of our lives.

“In Colorado we all want to spend our weekends going up to the mountains and I did that too,” she says. “But we are all lucky to live anywhere in Colorado. So right now, I think [it’s about] learning to appreciate the views that you have at home.”

Along with the directive from the state, Boulder County has also encouraged people to avoid long travel for recreation throughout the coronavirus pandemic. Still, open space agencies along the Front Range are reporting that increased visitation has led to trail and natural resource damage as people often step or hike off trail to try to stay six feet apart from others. Additionally, trailheads and neighborhood access points have become overwhelmingly congested as people flock to open space areas.

Vivienne Jannatpour with Boulder County Parks and Open Space says regional trails, like the ones Kitching explores in her guidebook, are often a better option than overcrowded and popular open space hiking destinations. Not only are these trails wider, allowing for appropriate spacing between groups without damaging habitat, but they also have multiple access points, which helps decrease congestion at trailhead parking lots.

“Part of what we’ve been trying to get across when we say try to stay at home as much as possible is that there’s nature in neighborhoods, there’s little neighborhood trails,” Jannatpour says.

“You can go for a hike without going to crowded places,” Kitching adds. “The spirit of urban hiking is doing something different. If you’re always going up to Chautauqua and you feel like that’s the hike that makes you feel fit, well get the same distance somewhere else. We can all do that right now: Turn a different direction — go east instead of west, go north instead of south — see something new.”

Her book offers a range of urban hikes from two to 10 miles, although Kitching says many of the routes can serve as a starting point to much longer adventures. The St. Vrain Greenway for example is a great place for an urban hike, a paved path along the river with plenty to explore in Longmont. But it also takes you all the way out to Weld County.

Not included in the guidebook, however, is Kitching’s Walk 360 Slow Marathon, a 26-mile loop around Boulder that links a variety of different historical landmarks and places of interest in hopes of connecting people more tangibly with their city.

She developed the route as the head of the Boulder Chapter of Walk2Connect, a national grassroots nonprofit cooperative that advocates for connection-based walking programs in places from Kodiak, Alaska to Miami, Florida. It was founded by Denver resident Jonathon Stalls in 2012, after he walked more than 3,000 miles from Delaware to California in search of discovering a respite from the busyness of the world around him.

Stalls’ journey spawned a philosophy Kitching, and the larger Walk2Connect movement, calls “life at three miles an hour.” It’s about slowing down all of life — changing the way we work, think and interact with each other — to mimic the average walking pace. It’s about appreciating what’s in front of us at every turn, being awed by the beauty all around us, which we often overlook, especially in our modern, fast-paced, pre-coronavirus world.

In a lot of ways, Kitching has been advocating for the very lifestyle the current guidelines for staying close to home demand of us for years. Urban hiking asks us to leave the ego behind and explore the places right outside our front door with the same enthusiasm and wonder that we often bring to our adventures in the backcountry. And it’s a lifestyle Kitching hopes will continue long after the pandemic, and the strict public health orders that come with it, end.

“That’s what I hope: we really hold onto this philosophy of slowing down, giving ourselves breaks when we need them, moving our bodies so that we keep our minds and our bodies healthy, and just keeping that mindset of connecting to ourselves, to places and to others at a human pace,” she says. “We don’t want to make light of the pandemic. But if it can help inspire more conscious and conscientious ways of being, I think that’s a net benefit in some way.”