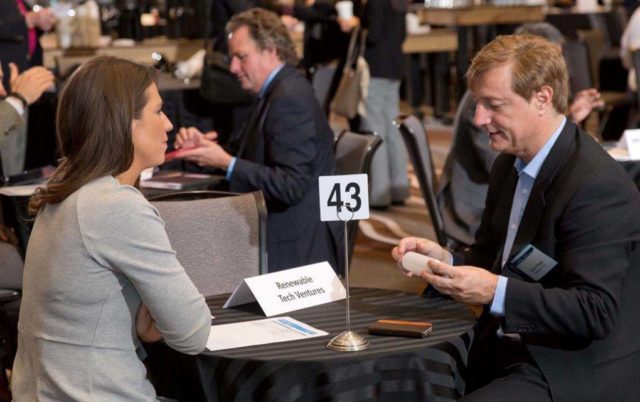 After seven years as a conference attendee, in November 2015 Tim Reeser stood on Denver’s Grand Hyatt ballroom stage as a presenter at the two-day Industry Growth Forum (IGF), hosted by the National Renewable Energy Laboratory (NREL). Before him sat more people than he could count. Many were just like him — clean technology business CEOs and founders eager to pitch the promise of their up-and-coming companies. But some out there were bigwig investors — there to listen, score his pitch and maybe even strike up a deal if he was convincing enough.

As president and co-founder of Loveland-based Lightning Hybrids, a technology company that equips trucks and busses with energy-saving brake systems, Reeser was trying to make the ultimate sale.

As the U.S. Department of Energy’s chief national laboratory for renewable energy and energy-efficiency research, NREL identified long ago that the lack of funding for clean tech startups is one of the largest barriers to the industry’s advancement. Nearly every year since 1995, IGF has brought together the most innovative nascent companies from around the globe to help entrepreneurs strategize, collaborate and get funding for their  clean technology.

Over the past two decades, billions of dollars have been pumped into startup and early-stage clean technology companies as a result of the forum. Kate Cheesbrough, assistant director of NREL’s Innovation and Entrepreneurship Center, says some investors and entrepreneurs close deals by the end of the forum. But more importantly, “The IGF lays the foundation for many future conversations between the companies and the investors in years to come.”

Each year, 30 presenting companies, reviewed and vetted by an external committee of more than 80 investors and national incubators, are selected from a pool of around 150 applicants.

In 2015, Reeser knew he’d have to use his 10 minutes on stage wisely. In addition to attracting private investors, three winners receive technology assistance from NREL — a privilege that can help launch a company into the market spotlight.

That year, he was presented with the Best Venture Award after describing how his company’s braking system can significantly reduce not only fuel use, but also fuel emissions.

Since then, Lightening Hybrids has jumped right into the global clean energy market. Currently, they have 50 systems running in UPS trucks in Chicago; 68 systems are installed in paratransit buses in Boston; a Volvo company in India is running a pilot system, as is another in Mexico; in London, DHL uses the system in their delivery trucks; even NREL adopted Lightning Hybrids’ system in its shuttle busses.

On April 13, IGF’s next installment kicks off, including presentations from  two Colorado-based companies: Forge Nano, developers of innovative nano-technology that can apply protective coats to the smallest materials on earth; and Vartega, a low-cost recycling company that develops carbon fiber for use in fabrics, 3-D printing filaments and thermoplastic pellets.

Aside from the presentation competition, the forum also organizes a networking session where more than 600 meetings take place. A panel of NREL’s expert clean-energy team members will address different strategies and challenges that emerging companies may face.

“We’re hoping to make as many connections as possible,” Cheesbrough says. “We want to create awareness and visibility not only of these new companies, but of the importance of clean energy.”

Additionally, IGF recognizes the diverse array of companies involved in clean technology. “When most people think of clean tech, they think about renewables,” says Chris Shepard, executive director of Colorado Cleantech, a Denver-based organization that has partnered with IGF since 2008. “But there are many more sectors that are included in clean tech that have the same outcomes — making the environment cleaner and more sustainable, like advanced transportation, energy efficiency in buildings, grid infrastructure, energy storage, water and air technologies.”

Especially with the Environmental Protection Agency high on the new presidential administration’s chopping block, Shepard says IGF will continue to play a pivotal role in propelling America’s energy future. Over the past decade, renewable energy markets have “advanced so quickly and prices have come down so drastically that wind and solar and other clean tech initiatives are price-competitive with coal plants, even without the [government] incentive,” Shepard says. “The markets, instead of policy, are driving the uptake and deployment of clean tech. Big corporations are saying they want to be 100 percent renewable and more efficient because their customers are demanding it.”

Plus, many companies attending IGF also cater to European markets, which generally have higher efficiency standards, necessitating innovations that go beyond American regulations.

“I refuse to let any administration dictate my business,” Reeser adds. “I’m going to find a way to create value for customers and world energy, and if I’m doing that successfully, I’ll do that regardless of political headwinds.”

As for his own business, Reeser doesn’t seem worried. Rather, he sees the opposition as a chance to rise to the occasion.

“One of the challenges with a supportive administration was that they tended to pick favorites. If you were doing something out of ordinary, you maybe didn’t get as much support,” he says. “But I’m an optimist by nature, and I believe if we are creating good value, we’ll find the way, regardless of the political structure, to success.”