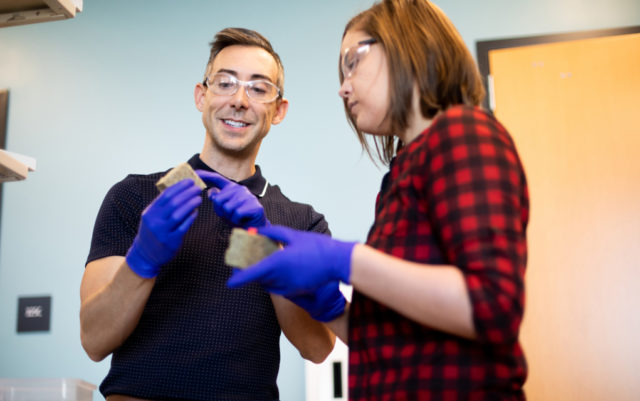 Concrete is by far the most utilized building material around the world. But it’s also responsible for 8% of global carbon dioxide emissions, according to Chatham House, an international think tank. Producing cement requires a chemical reaction that releases CO2 in addition to requiring the burning of fossil-fuels for the material’s heating process and mining of its raw materials. It’s estimated that the cement industry would need to decrease its annual emissions by 16% by 2030 in order to meet the reduction goals of the Paris Climate Agreement.

So what if we could create a living building material that could replace cement altogether?  That just might be a very real option.

Using sand, water and bacteria, researchers at CU-Boulder, have developed an alternative building material that requires very little energy to produce and even captures CO2 in the process.

“Growing something from carbon dioxide rather than emitting it is particularly exciting,” says structural engineer and CU-Boulder professor, Wil Scrubar, who heads up the University’s Living Materials Laboratory.

There are several green building standard programs and initiatives out there that promote the use of sustainable materials made from biological matter, but Srubar says this new technology takes the concept one step further.

“Ours is the only one that has been shown to stay alive,” he says.

It all starts with a small culture of cynobacteria, as originally suggested by CU’s Jeffrey Cameron, assistant professor in biochemistry. Cameron is coauthor of a study published Jan. 15 in the journal Matter. The study is a product of interdisciplinary research at CU-Boulder that brought together a variety of disciplines from structural engineering to biochemistry to microbiology, Srubar says.

To create the bricks, cynobacteria grows on sunlight, CO2, some water and nutrients. Then the team mixes in some sand and some gelatin, and elevates the temperature, all of which creates calcium carbonate — one of the main ingredients in cement.

“During that process, the bacteria are growing, they’re multiplying, they’re creating the minerals that are being given off to the system and that’s helping to cement everything together and then we can pour that into any shape,” Srubar says.

But that doesn’t mean a house will turn into a skyscraper overnight if built with the new material, he jokes. Once the material takes the desired shape in a mold, researchers can drop the temperature and dehydrate it, causing the material to gel together and stop growing.

“So you can imagine just like putting leftovers into the fridge, when we cool the bacterial culture inside of the brick, the bacteria shutdown. They don’t replicate nearly as fast as they would at the elevated temperature,” he says. “And then, especially when we dry it out, the bacteria metabolisms are inhibited even further than that.”

The bacteria remain alive, however, allowing the researches to essentially “resurrect” a brick and begin the multiplication process all over. What’s more, the same process could be used to repair cracks. All it takes, Scurbar says, is a little bit of water, more sand and heat for the bacteria to start growing again.

“We definitely understand the bacteria and we control them and only trigger the growth phase when we want it,” he says.

The research was funded by the U.S. Department of Defense, motivated to find a way to build something out of seemingly nothing in places like deserts, Srubar says. “They’re interested in it for deployment of military installations in those environments.”

But the technology could also be used in other “resource scarce environments,” say, for example, Mars. “When we talk about human settlements on other planets, I don’t think we’ll be trucking bags of cement with us,” he says. “I think we’ll actually be bringing biology with us.”

But before it’s sent into space, Srubar says, the material will be best used inside — for insulation, solidifying foundations or sub flooring — due to the controlled humidity of most indoor environments. It could also eventually replace bricks, but that would require something to protect it from the elements, like a stucco exterior.

The living bricks aren’t on the market yet, but could potentially start showing up in buildings in the next five to 10 years, Srubar says, especially, as an alternative to current emission intensive construction materials.

“The demand for carbon storing, or really a carbon neutral building material alternative to something like a mortar or a concrete, is actually quite high.”