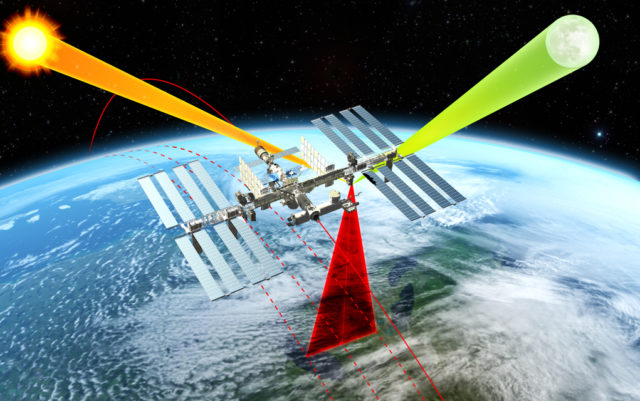 The balance of how much energy the Earth receives and emits tells scientists a lot about the state of this planet’s climate.

Peter Pilewskie, a professor at CU’s Laboratory of Atmospheric and Space Physics (LASP), likens it to balancing a budget: “You could think of this as, we’re in the checkbook-balancing business and our income is sunlight,” he says. If the amount of energy (sunlight) that the planet is receiving outweighs the amount that the planet is reflecting and emitting, the Earth is warming. If we’re reflecting and emitting exactly as much energy as we’re receiving, then things are in harmony — the climate is stable.

Having an accurate understanding of that balance, of energetic “income” to energetic “expenditure,” allows scientists like Pilewskie to gauge how much the planet is warming. And if they measure that imbalance for long enough, it will also describe how fast that warming is happening.

“We have to know how much energy the system has,” he says. “If you want to balance your checkbook the first thing you need to know is your income.”

Luckily, that income only comes from one place: the sun. And Pilewskie and his team at LASP have already created an instrument to measure that side of the equation: the “Total and Spectral Solar Irradiance Sensor” (TSIS-1).

TSIS-1 was launched in December 2017 riding on a SpaceX Falcon 9 shuttle and headed for the International Space Station (ISS). Since it powered up in January 2018, it’s been staring directly into the sun, providing scientists with highly accurate, stable and continuous observations and measurements of solar irradiance — the radiative “income” of the planet.

So far TSIS-1 has worked well, Pilewskie says. But it still only represents one side of the energetic equation. The other side of it, “expenditure” (the total sum of reflected solar energy and emitted infrared radiation), will be measured by Pilewskie’s latest project, CLARREO Pathfinder.

This new device, which LASP is developing for the ISS, will measure radiative energy being reflected back into space from Earth. Between the two instruments, Pilewskie and other scientists will be able to track some of the key components of Earth’s radiative energy budget.

“CLARREO will be able to monitor climate change from space,” Pilewskie says. Which, he adds, is uncharted territory: “This is the first instrument of its type.”

Pathfinder has been in the works since 2016, and it’s going to be the most advanced solar spectrometer ever engineered, surpassing other similar technologies on multiple levels. Pilewskie’s hope is to use this advanced new tool to develop the most precise record of climate change yet.

Not only will CLARREO Pathfinder be measuring a more comprehensive spectrum of light energy, it will also be doing so with unparalleled accuracy. That data will be transferrable to other scientific instruments, improving the accuracy of other measurements being taken from space.

“We’ll be looking at the same scenes on Earth at the same angles as other instruments that are already on orbit,” he explains. “And then we will compare our measurements to their measurements, and we can realign those to match these more accurate measurements.”

Pilewskie compared it to household outdoor thermometers, which often need recalibration. Instruments on the space station are no different, and Pathfinder’s measurements will be so accurate that NASA will be able to use it to calibrate those other space-based monitoring systems, Pilewskie says.

Project CLARREO’s Pathfinder recently passed its preliminary design review and its next review is scheduled in 2020. Then comes the construction and calibration phases. When Pathfinder is ready for life in orbit, sometime in 2022, it will be launched into space to join the scientific toolbelt of the ISS.

Using instruments like these to track and build a record of climate change will be essential over the next few decades, says Pilewskie, to inform scientists, inspire activists, educate people and provoke action from politicians and global leaders.

And, hopefully, it will give society a better understanding of what it’s going to take to balance the planet’s radiative “checkbook.”