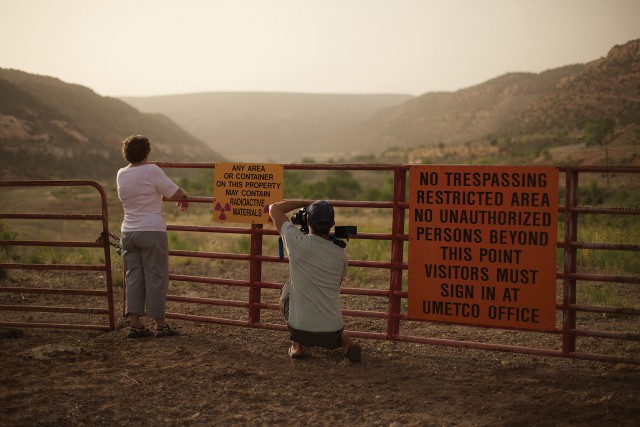 Uranium Drive-In
is as much as story about a place and its people as the thing happening to and
in that place. That is to say, in a story about the first uranium mill proposed
in the United States in 30 years, it is the people and their memories of and
love for their towns that take the wheel to drive the story.

From images of lush fields being watered at dusk, coiled
rattlesnakes and blonde sandstone sprouting with piñon trees, director Susan
Bereza draws viewers into the town meetings and ranch house living rooms of the
small Colorado towns of Naturita and Nucla. These western outposts of Montrose
County and rural towns four miles apart, and 60 miles from a stoplight, with
populations in the hundreds that are still deeply entrenched in a sense of
tradition and community. They’re often overshadowed by their neighbor to the
east, the bustling tourist stop of Telluride.

Beraza, a 20-year resident of Telluride, had heard stories
about the proposed Piñon Ridge Mill in Paradox Valley, the so-called “West
End,” and began attending meetings about the mill.

“It was just really different than I thought it would be — it
was almost like the communities [of Telluride and the West End] were versus
each other,” Beraza says. “So I just started tentatively picking up the camera
and talking to people.”

From the start, her interest was in showing the perspective
of the people who wanted the mill — a view left out of much of the coverage,
and a story not about the David and Goliath of the small towns versus the big
companies.

“I just wanted to see what happened, see what unfolded and
really just trying to honor and tell their point of view,” Beraza says. “It’s
very subjective. One person’s truth is completely different than someone else’s
truth, and I wanted that to be the point of the story as opposed to what’s
right or wrong about the uranium debate and nuclear energy because, first of
all, it’s incredibly complicated and I can’t even pretend to know the answer
there. So I just decided to approach it in a different way.”

For more than two years, she attended and filmed meetings in
Telluride with the environmental groups, specifically Sheep Mountain Alliance,
opposed to the mill, and meetings in Naturita and Nucla where the mill is
welcomed as the source for more than a thousand jobs in an economically
depressed town. Nucla’s grade school has closed, and Naturita’s grocery story
and shoe store are now empty buildings and vacant lots. The Uranium Drive-In
itself, once a vital part of the picturesque Naturita in the ’50s, is
abandoned, its sign toppled and lying in the dust.

Her cast of characters — environmental activists; injured
mine and mill workers; a cowgirl with 50 years in the saddle; a family almost
entirely off the grid, fetching their water from a spring and killing their own
sheep for meat; a woman who lost a father and brothers to lung cancer, a known
result of uranium exposure — is anchored by three central characters from
each of the three towns. Ayngel Overson is a Nucla resident eager to see her
husband end three years of unemployment with a job at the proposed mill;
Jennifer Thurston is a Sheep Mountain Alliance environmental activist who
visits the sites of uranium mills and mines with a Geiger counter in hand; and
Tami Lowrance is the mayor of Naturita, often brought to tears or kept up at
night by the desperate poverty plaguing her town.

“I was very up front, I said, ‘Hey I’m from Telluride and
I’m a filmmaker but I really do want to tell the story more from your point of
view,’ and people really opened up,” Beraza says. “They just said they wanted
their voice to be heard and that nobody really seemed to be listening to them.”

She sat through meetings they thought too routine for her to
take interest in, and followed them into the grit of life on a ranch without
flinching.

“We’ve had a couple people especially who aren’t used to
that kind of thing who were like, ‘Why did you have to show a castration or a
sheep getting slaughtered?’” Beraza says. “I completely fought hard to keep
those in because I feel like, it’s very normal there and if we act like that’s
not how some people live, then it’s sort of doing a disservice, like we’re just
sort of glossing over.”

As she shot for the film, she followed ongoing changes to
the uranium market, including those brought on by the Fukushima plant meltdown,
and a protracted legal battle that saw the Sheep Mountain Alliance suing
Montrose County over the deal made with Energy Fuels to one the mill in an area
zoned for agriculture, and continuing through public hearings required by the
federal government.

“It’s a flawed facility in a bad location in a beautiful
spot that could be put to better use and it’s not the right choice for our
regional economy,” Thurston says in the film.

The community is no stranger to the various blessings and
curses of an economy built around uranium mining and milling. Uranium Drive-In rides along with Bette
Nickle to the site of Uravan, where Nickle leans against a fence covered in
signs warning visitors to stay back because radioactivity lies ahead, and looks
out over a barren valley bottom that used to house the town she grew up in. She
recalls the nightly barbeques, the town swimming pool, how the lights shut off
at 9 p.m. when the mill shut down for the night and how the river always seemed
to run a magical array of colors — tailings from the mill, come to find out, on
its way downstream toward the Colorado River.

The entire town was deemed a Superfund Site in 1986, too
contaminated with radioactive products and mill tailings containing uranium and
radium, as well as other heavy metals in the ground water, to be habitable, and
residents were relocated and, over 20 years and with $120 million in federal
funding, the mill dismantled and homes torn down.

“That’s the saddest thing in the world,” Nickle says in the
film. “I don’t think many people lose their home town.”

“It’s gone. There’s not even, they completely buried
everything — every tree, every blade of grass, it’s just completely bizarre,”
Beraza says. “It’s eerie, but also incredibly romanticized and nostalgic. … People
would get dreamy talking about this town and it just sounded like an amazing
place to grow up with the swimming pool and adventuring out into the canyons as
kids.”

The proposed Piñon Ridge Mill, to be operated by Energy
Fuels, would bring jobs and activity back to the towns. Many of the towns’
residents want the jobs for the sake of their families and the prosperity of
their towns, saying they’ll be better regulated than the industry was when
Uravan was open for business and business was contaminating the town and,
presumably, the people living in it. So badly wanted is the mill that it
appears in Sunday prayers. They want to see their communities thrive and
consider the economic and personal income boosts worth the risk. But
environmental groups have used lawsuits to levy their concern about the
environmental and health costs to those communities and the 30 million people
downstream from the watershed near where the mill and its tailings ponds.

The townspeople rebuttal is that the tree-huggers in
Telluride just don’t seem to understand that this isn’t just about water and
air contamination, it’s about people.

What Uranium Drive-In,
which premiered at Telluride, has done is illustrate those people to the rest
of the world.

“I feel like a lot of the locals here were kind of shocked
that they had neighbors so close that they were completely clueless about. They
just were like, ‘Oh, we don’t want that dang mill,’ and they didn’t think about
the actual people,” Beraza says. The response has been a flood inquiries about
what can be done to help the West End.

Since the film opened, Naturita, Nucla and Telluride
residents have started to come together to organize toward finding solutions
that will mean jobs and economic growth in the region, including cottage
industries and tourism centered around the area’s recreation opportunities and
mining history, with or without the mill.

Additional information on those efforts can be found at
www.afteruraniumdrivein.com.

Suzan Beraza will be
attending the screening of Uranium Drive-In at 5:15 p.m. on Sunday, Feb. 16, during the Boulder International Film
Festival, which will include a Q&A after the film.