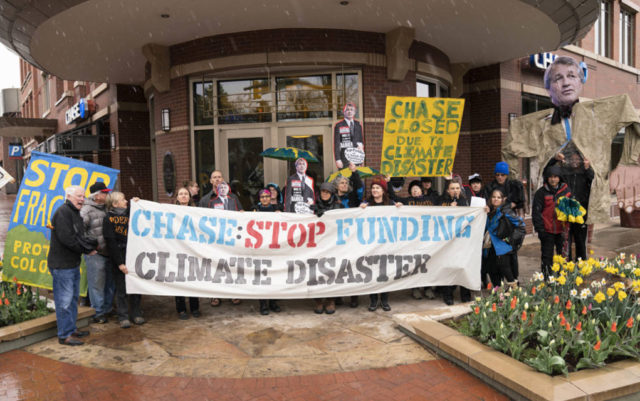 On April 10, activists protested outside JP Morgan Chase locations in Denver, Boulder, Colorado Springs and 20 other locations around the state. The activists temporarily shut down two of the bank’s branches in Boulder and Colorado Springs, which closed their doors to customers, employees and anyone else trying to access them.

These protests were part of a national day of action against JP Morgan Chase, which a new report distinguishes as the single largest sponsor of the fossil fuel industry and companies expanding fossil fuel activity in the world. JP Morgan Chase, along with other big banks like Wells Fargo, CITI and Bank of America, have poured $1.9 trillion into fossil fuel companies and associated projects since the Paris Climate Agreement of 2015, the new research reveals.

Compiled by Rainforest Action Network, BankTrack, Indigenous Environmental Network, Oil Change International, Sierra Club and Honor the Earth, the report, titled “Banking on Climate Change,” makes one thing clear: When you follow the money funding climate change activity, it will take you straight to the bank.

For instance, JP Morgan Chase, where the City of Boulder currently banks, financed fossil fuel companies to the tune of $63.9 billion in 2018 alone, 29 percent more than any other bank in the U.S. It’s the number one U.S. financier of tar sands oil, arctic oil and gas, ultra-deep-water oil and gas, liquefied natural gas (LNG) and coal mining projects. This is the third year in a row that JP Morgan Chase has held that top spot, over which time it’s provided $195.7 billion in funding to the industry.

It’s a fact that’s not only compelling activists to take a stand against these big banks, but one that’s also pressuring the City of Boulder to explore financial options beyond JP Morgan Chase.

Unless a change is made, Boulder’s tax dollars will continue to indirectly prop up oil, gas and (to a lesser extent) coal companies, which runs counter to the City’s climate change commitment.

It won’t be an easy transition to make, though, according to staff in the City’s finance office. State laws, federal requirements and City financial needs currently have Boulder shackled to JP Morgan Chase. However, it wouldn’t be impossible to break away, some contend.

“It’s just really tantamount to our efforts to address the climate crisis that we stop putting our money into projects that are funding climate change,” says Micah Parkin, founder and executive director of 350 Colorado, which organized the April 10 protests.

So, in the summer of 2017, Parkin and others from 350 Colorado approached the Boulder City Council with an appeal to divest from JP Morgan Chase, where the city has banked since 2004.

“So far, the City finance staff has been fairly negative about it. I think a lot of it is comfort with the current situation,” Parkin says. “But fortunately, it seems like our City Council really seems to get it.”

In December 2017, City Council announced they would shorten the City’s next contract with JP Morgan Chase from five years to two (with the option to renew for an additional three years), while exploring the possibility of alternatives. Right away, though, it became clear that the task of disentangling Boulder from JP Morgan Chase would not be such an easy task.

“One of the reasons that our financial folks like to use a large bank is because they can provide a full suite of financial services,” explains Sam Weaver, one of the Council members who tasked the City financial staff with reviewing alternative banking options. These financial services include things like lockbox services, facilitating City credit card processing, administering the City’s purchasing-card system, imaging services and holding the City operating accounts.

“Our partner needs to be able to support a pretty diverse range of transaction types,” Weaver says.

That limits the available options significantly, but not entirely. There are still two routes that City staff identified as possible alternatives: to establish a public bank or to start banking through a credit union.

However, both of these options present challenges.

Creating a public bank would allow Boulder to not only stop funding climate change through its financial activity, but also to choose how the income from that bank is used. Parkin points to the Bank of North Dakota — the only state-owned facility of its type in the United States — as an example. The entire state of North Dakota is divested from private banks, and has been since 1919.

“With a public bank, the community can keep its resources local,” Parkin explains. “It can use that lending capacity to fund the projects that the community really cares about, like financing for renewable energy projects, or like the new municipal utility or affordable housing, social justice support, whatever they need or want to fund locally.”

It’s an attractive idea and cities like Seattle, Santa Fe and Los Angeles have all considered it as a divestment option. But according to Bob Eichem, the chief financial advisor for Boulder, none of these cities has yet to successfully implement a public bank.

“Santa Fe, New Mexico, spent over a year studying the feasibility of [establishing a public bank] through the City,” Eichem says. “Their conclusion in the end was that they were too small to do it on their own.”

Seattle also completed a feasibility study in October 2018, which concludes: “Though no law precludes the City from establishing a public bank, state and federal laws would limit its operations and revenue potential, such that the value of such a bank must be carefully weighed vis-à-vis the City’s goals.” However, the study came with a list of recommendations from a stakeholder group to move the idea forward, including developing a public bank business plan.

“Los Angeles also had a ballot issue that would have allowed them to have a public bank,” Eichem adds. “And last November it received a 42 percent vote, but it did not pass.”

The most digestible option, according to Sam Weaver, would be to bank through a credit union. It could be accomplished in the shorter term, and would require less up-front capital as opposed to establishing Boulder’s own public bank. The only hurdle preventing this is state legislation — which is not a trivial challenge to overcome, according to Cheryl Pattelli, the City of Boulder’s chief financial officer.

“Colorado has rules that will not allow us to bank with credit unions,” Pattelli says, explaining that currently the state requires a city’s bank have FDIC insurance, whereas credit unions use NCUA insurance. In order for Boulder to pursue banking through a credit union, it would require the state legislature to change the law to allow cities to bank through institutions insured with NCUA coverage.

It’s a legislative change for which the City of Boulder is pushing.

“We have put in our legislative agenda an impetus to support any legislation that will allow the City to bank with a credit union,” Weaver says. “Where it is right now, is we’re looking for allies at the State House to give us more flexibility on where we can bank our money.”

So, until legislation changes, not much can be done by the City except to wait and see how the situation evolves. And, according to Eichem, that’s not such a bad thing. He says that with every new feasibility report done by every city considering divesting from big banks, Boulder learns more about what it’s going to take to actually make this happen.

“There’s a lot of groundwork that these other places have done that I really do believe, if Boulder ever does go forward on this, it will save us a lot of time because every report has some commonalities throughout it,” Eichem says. “So that’s very helpful.”

If the City Council does decide to move forward with this divestment initiative, the next step would be for Boulder to do its own feasibility study, like Seattle or Santa Fe — which, Eichem and Pattelli admit, could take several years and a significant budget to complete. But, with Boulder’s Climate Change Commitment, it may yet happen.

“If we’re trying to be a leader around the issue of climate change, which I really think Boulder is and tries to be, then this is a huge oversight if we don’t do something about our connection to JP Morgan Chase,” Parkin says. “All the climate change mitigation in the world won’t do us any good if we keep propping up the fossil fuel industry.”

Correction: The original version misstated that a JP Morgan Chase branch in Denver was closed due to protests on April 10. Additionally, it incorrectly characterized the Seattle feasibility study’s conclusions as “similar” to that of Santa Fe’s. The story also incorrectly stated that Micah Parkin said the feasibility study would take significant time and money. We apologize for any inconvenience.