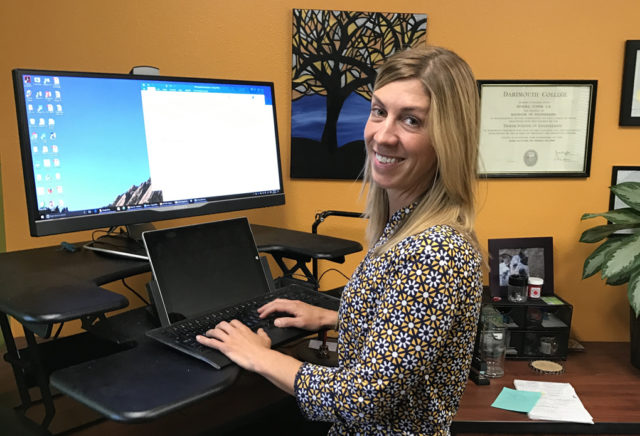 Kendra Tupper is out to change the conversation around sustainability. Recently hired as the first Chief Sustainability Officer (CSO) for the City of Boulder, Tupper is tasked with examining the topic through a wider lens.

Tupper formerly worked as the energy services manager for the City, but in her new role, she will lead the City’s efforts to create a more sustainable climate future for the city.

The creation of the CSO role flags sustainability as an increasingly important topic within Boulder. Previously, sustainability issues fell under the jurisdiction of the Planning, Housing and Sustainability department, but never received the representation that a deputy director or higher position has to offer. In creating this new position, the City has ensured that there will be someone to steward sustainability efforts more widely across City organizations.

“There are parts that we know what they’ll be and we’re working out the rest, so it would be nearly impossible to give a super clear, concise definition of the role,” Tupper says.

Despite the work-in-progress nature of her responsibilities, Tupper already has several goals in mind for what she plans to accomplish in the coming years, beginning with plans related to the upcoming Ballot Measure 2L. The measure asks voters to extend and increase the utility occupation tax that funds municipalization, the City’s efforts to create its own electric utility. The Climate Commitment adopted in 2016 lists the creation of such a utility as one of the key steps in reaching the City’s 2030 and 2050 energy goals.

Whether or not the measure passes, Tupper is preparing for either scenario. As one of her short-term goals, she intends to implement a five-year strategic plan that puts the City on the path to achieving the Climate Commitment goals — 100 percent renewable electricity by 2030 and an 80 percent emissions reduction by 2050 — no matter the November ballot outcome.

As for long-term plans, the Climate Commitment goals themselves are at the top of her list. As an outdoors enthusiast, Tupper is passionate about the environment and protecting the city she loves.

Growing up in urban Massachusetts, Tupper fell in love with nature and the outdoors when she attended bucolic Dartmouth College in New Hampshire. A self-described avid cyclist who currently keeps five bicycles in her garage, Tupper loves walking the trails around Boulder with her 9-year-old Australian cattle dog, Isaac.

“I really connected with the outdoors a lot [when I got to Dartmouth] and wanted to find a way to blend my love of math and science with my passion for protecting the natural environment,” she says.

After graduating and searching for a way to further her passions, Tupper moved to Boulder and got her master’s degree through the building systems engineering program at the University of Colorado Boulder’s Civil, Environmental and Architectural Engineering department.

“That’s when I realized that Boulder was a significant upgrade in terms of mountains compared to New Hampshire, with way better weather,” she says.

But before she could settle in Boulder, Tupper took her first job at an engineering firm in San Francisco, where she designed energy-efficient HVAC systems for commercial buildings.

“It was a great experience, but I always sort of wanted to find my way back to Boulder,” she says.

Her wish came true when a position opened up at the Rocky Mountain Institute. There, she served as a principal of building processes for seven years before joining the City of Boulder in 2014.

Tupper hopes to share Boulder’s broadened view of sustainability with local and national leaders by maintaining the City’s participation in national and international sustainability organizations. Her role also includes speaking at conferences and sharing with other cities Boulder’s emphasis on solving environmental issues and addressing the social and economic aspects of sustainbility.

Although she never dreamed of working in any local government, she thinks that being Boulder’s new CSO is her ideal job in her ideal city.

“I always said that I would dream of working for the City of Boulder because it is very unique in that there’s a huge amount of support for climate work that you’re not going to see in other communities,” she says. “There’s so much energy and passion around making Boulder the best city it possibly could be.”