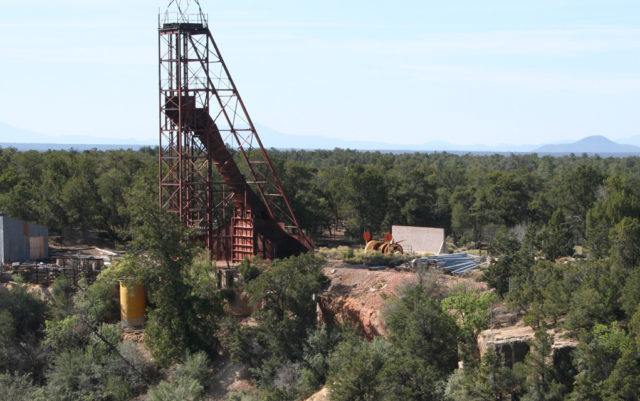 The Colorado rally added to voices across the nation in support of this proposed legislation that would permanently protect 1.7 million acres of public lands around the Grand Canyon from new uranium mining and logging on both the northern and southern rim.

Uranium mining has picked up in the Grand Canyon since the middle of the 20th century, with significant environmental impacts. Tests done by the U.S. Geological Survey show unsafe levels of uranium in 15 springs and five wells within the Grand Canyon’s watershed.

While there are no active mines within the monument, there are four existing mines, several future projects and dozens of mining claims.

According to a report released by Environment Nevada in 2011, uranium mining could contaminate drinking water for millions of people in Phoenix, Las Vegas and Los Angeles.

Former Secretary of the Interior Ken Salazar signed legislation in 2012 that made it impossible to establish new uranium mines in the areas surrounding the park for 20 years, but mining companies are suing to overturn it.

Congressman Raúl Grijalva (D-Ariz.) introduced the Greater Grand Canyon Heritage National Monument Act in November 2015. Environmentalists have been pushing for President Obama to sign the bill into law before he leaves office.

After two months of negotiations with the Public Utilities Commission (PUC), Xcel Energy is dropping a proposal to add a grid-use charge to solar users’ bills, instead launching two pilot programs that will adjust electricity rates according to periods of peak demand or usage surges.

Xcel filed the settlement, along with more than 20 other parties, on Aug. 15.

Xcel’s original proposal sought to shift more costs onto the new grid-use charge while lowering the cost of each kilowatt used. Solar advocates and environmentalists were concerned the plan would discourage energy efficiency, reduce residential solar installations and increase costs for users who generated electricity for the grid.

While the new settlement axed the grid-use fee, it retains net metering, meaning solar customers gain credit for the energy they generate for the grid.

Xcel Energy also agreed to provide rooftop solar panels to low-income areas over the next three years by partnering with the Colorado Energy Office.

Usage surges — when a large amount of electricity is consumed at once in a residence — will cause rates go up regardless of whether or not it is an on-peak or an off-peak hour.

The settlement targets 10,000 residential customers to volunteer for each of the pilot programs in 2017. After a trial period, the PUC will determine whether all 1.2 million of Xcel’s customers will adopt the rates in 2020.

Hearings on the settlement are expected to be held in October.