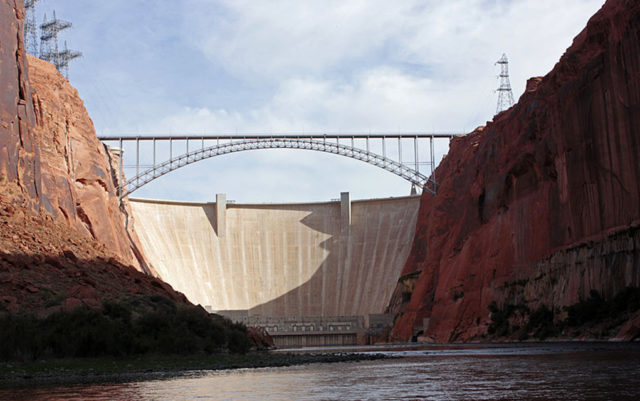 The U.S. Department of the Interior released its Final Environmental Impact Statement (FEIS) regarding the Glen Canyon Dam, admitting the dam releases dirty energy via methane emissions. The Glen Canyon Dam blocks the flow of the Colorado River outside of Page, Arizona, creating the second largest man-made reservoir in the U.S., Lake Powell.

However, emissions are not the only problem the dam poses to the environment. Originally intended to collect water and store it in reserve for the dry West, dams like the Glen Canyon Dam contribute to the loss of a combined total of hundreds of billions of gallons of water to evaporation and underground runoff every year.

Because of the Glen Canyon Dam, Lake Powell itself loses about 160 billion gallons a year to evaporation and 120 billion gallons to underground runoff. The overuse of the Colorado River and its surrounding river systems, which contribute water to one-eighth of Americans and one-seventh of the crops grown in the U.S., have also contributed to the shrinking of Lake Powell’s water supply, which now only holds about half of the water it can at maximum capacity.

As the effects of climate change are increasingly felt around the world, researchers at Colorado State University in Fort Collins are conducting a new study to determine the rate of methane leaking from natural gas gathering compressor stations in the U.S. This follows last year’s study, funded in part by the Environmental Defense Fund, that found methane from natural gas gathering systems accounts for 30 percent of all methane emissions in the U.S. greenhouse gas inventory.

Although proponents still claim natural gas can be seen as a “bridge fuel,” research has shown its main component, methane, to be up to 84 times more potent as a warming greenhouse gas than carbon dioxide. Methane has been found leaking all across the infrastructure of the natural gas industry, from the pipelines and wells to the storage, processing and distribution centers.

The goal of the study is to create a national model for methane emissions to be used to test emissions stations and other infrastructure along the natural gas supply line. The study’s results will also be used as reference and a standard for the EPA’s Greenhouse Gas Inventory, a report that tracks emissions in the U.S. by source and economic sector.