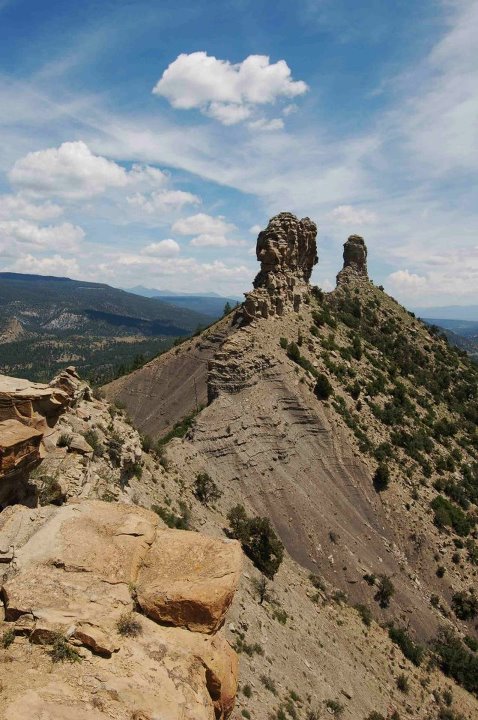 A thousand years ago, members of the Chaco civilization
chose Chimney Rock as the site of a village of more than 200 homes. Today, the
ruins of their village draw thousands of visitors, and the unusual way that the
moon rises between the two sandstone pinnacles of the Chimney Rock, as visible
from the site’s Fire Tower, continues to impress. After a five-year-long effort
by the national trust, President Obama officially declared this southwestern
Colorado site a national monument. The effort had the bi-partisan support of
Colorado Senators Michael Bennet (D) and Mark Udall (D) and Congressman Scott
Tipton (R-Cortez), the Native American community, local businesses and other
stakeholders.

Located in the San Juan National Forest and near the
Southern Ute Reservation, Chimney Rock National Monument has the potential to
double both the number of jobs required to run the site and the revenue
derived from tourism to the area each year.

Perhaps more important to the Native Americans who look to
Chimney Rock as a place of spiritual significance is the fact that the site
will now receive increased protection.

Though there were few voters who marked global warming as
the “single most important” issue of this election, 61 percent of undecided
voters say climate change policies will be among the issues they consider when
voting for president, according to a study released by the Yale Project on
Climate Change Communication.

“Undecided voters lean towards pro-climate action and will
be considering the candidates’ positions on global warming when they vote in
November,” Dr. Anthony Leiserowitz of Yale University said in a press release.
“The fact that Undecideds look remarkably similar to Obama voters on climate
change could prove important on election day.”

Seven percent of American voters remain undecided about how
they will vote in this year’s presidential election.

According to the survey, a majority of Obama voters and
undecided voters agree that global warming is happening, is human caused, and
that President Obama and Congress ought to be “doing more” in regards to global
warming. The study also points out that 85 percent of likely Obama voters, 83
percent of undecided voters and 73 percent of likely Romney voters agree that
the U.S. should use more renewable energy resources.

A 77,000-acre donation of private land in the Sangre de
Cristo Mountains has been designated the newest conservation area in the
National Wildlife Refuge System.

“This newest treasure in our National Wildlife Refuge System
links together a diverse mosaic of public and private lands, protects working
landscapes and water quality, and creates a landscape corridor for fish and
wildlife unlike any place in the world,” Secretary of the Interior Ken Salazar said, according to a Sept. 14 press
release from the Fish and Wildlife Service.

Louis Bacon, a proponent of landscape and wildlife
conservation, according to the Fish and Wildlife Service, donated the
conservation easement, the bulk of his 81,400-acre Trinchera Ranch.

The area will be monitored and supported by the U.S. Fish
and Wildlife Service, in cooperation with Colorado open lands. The agreement is
one of the first of its kind as it marks collaboration between a private
landowner, private land trust and the federal government.

Bacon is also in the process of donating 90,000-acres of a
conservation easement on his Blanca Ranch, permanently protecting nearly
170,000 acres. Together, the two conservation easements mark the largest
donation to ever be received by the U.S Fish and Wildlife Service.

This year’s warm and dry temperatures in the lower 48 were
one for the books, but another set of records that has drawn attention
worldwide is melting Arctic sea ice.

Reports show that the Arctic sea ice reached its minimum
extent for the year in September at 1.32 million square miles. That record is
293,000 square miles lower than the past recorded low from September 2007.

According to the director for the National Snow and Ice Data
Center, Mark Serreze, if the rate of its melting continues as it is, there
is a possibility that summer sea ice cover could be gone in the Arctic in a
couple decades.

The loss of Arctic sea ice cover affects the global heat
engine, the system our planet uses to transport heat from the equator to the
poles. Serezze says the absence of the sea ice cover changes the temperature
difference between the latitudes. This upsets the system and causes the Arctic
to become warmer. It also affects weather in the rest of the world. Recent
winters in Colorado, with slower moving storms and heavier precipitation, may
be in part due to what is happening in the Arctic.

Melting Arctic ice could also increase carbon dioxide in the
atmosphere. The absence of the thick sheet of ice exposes buried carbon,
increasing the greenhouse effect of our planet.