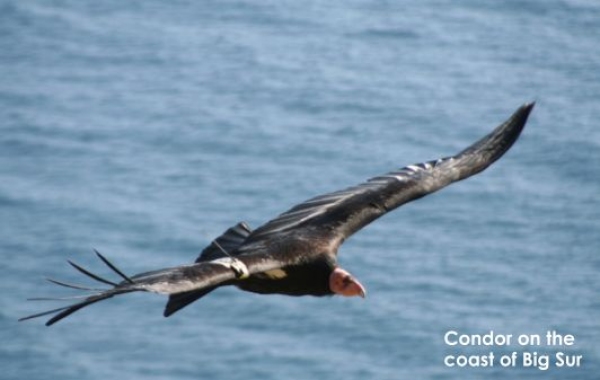 This week’s “endangered bird becomes more endangered” news story is brought to you by the California condor, which researchers at the University of California, Santa Cruz, and the University of Colorado have found are continuing to be poisoned by lead from bullets, despite restrictions on the use of lead-based bullets in condor areas.

According to the study, nearly half the condor population between 1997 and 2010 tested positive for lead poisoning. California Condors, the largest bird in North America with wingspans topping nine feet, ingest the lead bullet fragments when feasting on animal carcasses.

In an attempt to lower condor lead exposure, environmental and conservation groups have lobbied for a lead-based bullet ban in condor habitats, but have faced strong opposition from gun-rights groups. Even though a partial ban was enacted in 2008, researchers found no evidence suggested a decline in lead poisoning.

Although the condor population has been rising steadily since 1982 — from 22 of the oversized vultures to about 400 — don’t be fooled by the progress. The recovery is largely due to human intervention, such as captive breeding and monitoring.

According to lead author of the study and research toxicologist Myra Finkelstein, “we will never have a self-sustaining wild condor population if we don’t solve this problem.”

Lonesome George, the last of a tortoise subspecies on the Pinta Island in the Galapagos, has died. The Galapagos National Park announced June 24 that George had been found dead in his corral at the Tortoise Breeding and Rearing Center in Puerto Ayora, Santa Cruz Island.

George, a Chelonoidis nigra abingdoni tortoise, was about 100 years old. When he was found on Pinta Island in 1972, his subspecies was already thought to be extinct.

Galapagos National Park staff had attempted to breed George with other subspecies, but the eggs produced after 15 years of sharing a corral with two female tortoises of a different subspecies were infertile.

George and other giant tortoises have become a symbol of the Galapagos Islands.

“The plight of Lonesome George provided a catalyst for an extraordinary effort by the government of Ecuador to restore not only tortoise populations throughout the archipelago, but also improve the status of other endangered and threatened species,” the Galapagos National Park service said in the press release announcing George’s death.

An international workshop on management strategies for restoring tortoise populations over the next 10 years to be held in July will be conducted in Lonesome George’s honor.