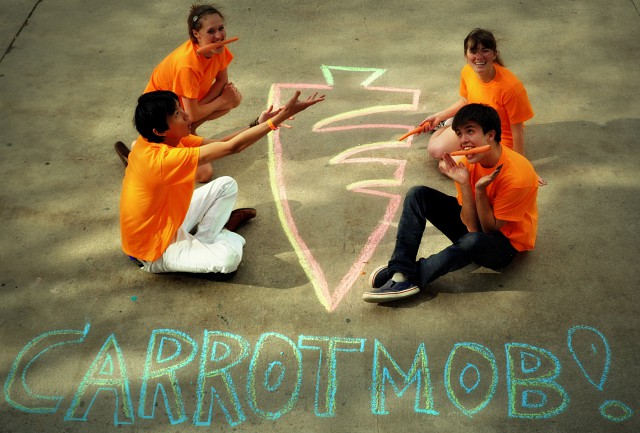 This coming Earth Day, the Carrotmob will descend upon University Hill at Half Fast Subs in an effort to raise enough money to help the sub shop become more energy-efficient. From 11 a.m. to 3 p.m. on Sunday, April 22, all revenues from Half Fast will be used to make the outdated restaurant more green.

The Carrotmob is a group geared towards helping businesses become more socially responsible. They help businesses with campaigns to raise money to make energy-efficient and eco-friendly changes, and they often arrive in carrot costumes.

“The name goes back to the old saying ‘There are two ways to make a donkey move forward,’” says Swithin Lui, the head campaigner for the Boulder Carrotmob. “‘You can either hit it in the back with a stick or you can dangle a carrot in front of it.’ We use this because instead of protesting or boycotting a business, we give them incentives like monetary rewards to get them to make socially responsible decisions.”

In celebration of Earth Day, Lui and his team began a bidding war among the restaurants on the Hill for the chance to host a Carrotmob event and use their revenues to update lights, windows and other items throughout their store. The final four contenders — Rush, Abo’s, La’au’s Taco Shop and Half Fast — began the bidding by offering percentages of their revenues from the day for energy efficiency updates.

“Half Fast eventually won by promising to contribute 100 percent of their revenues,” Lui says. “Honestly, we were expecting the final bid to be around 20 percent, so 100 percent was definitely a surprise, but Half Fast winning wasn’t. They said they knew they were going to win from the start.”

Anthony Merino, the general manager of Half Fast, says the sub shop has looked at becoming more environmentally friendly in the past, but the Carrotmob event is a great incentive to finally make the changes.

“It feels good to know that you are trying to improve the way your business functions and make it more environmentally friendly,” Merino says. “It was hard to choose what we wanted to do, whether it be composting, using renewable energy or becoming more energy-efficient. In the end, though, it will be great to be considered a green business, especially in a place like Boulder.”

Energy Smart has also contributed to the event by doing an assessment of Half Fast and determining what areas need improvement. After the assessment, Half Fast was able to establish a set of tiered goals based on the costs of each improvement. If they reach $2,500, Half Fast will change all of the light fixtures to LED lighting. If they make more than that, the shop will also replace the 100-yearold windows with more energy-efficient options. Finally, if the shop earns $5,500, the furnace will be updated as well as the lights, though the windows will be left alone.

In addition to the assessments, Energy Smart, offers assistance in finding contractors and available rebates, all as part of its suite of amenities available to businesses.

Thus far, Energy Smart has worked with 2,522 businesses, 310 of which are in the food industry. They have a little more than a year left of their grant, and by that time they hope to work with 5,300 businesses, says Pam Milmoe, the business sustainability coordinator for Boulder County Public Health.

“We have some big numbers,” Milmoe says. “We have given $923,000 in rebates so far, which are spurring $5 million in energy-efficient investments in both businesses and local utility investments. Through our projects, we are on track to reduce greenhouse gas emissions by more than 6,000 metric tons.”

The work at Half Fast is just one example of many businesses that have taken advantage of the grant given to Energy Smart to make Boulder more environmentally friendly.

Lui was happy to help the movement spread to the Hill. “We figured we were going to try and attract as many students as we could, and by choosing a restaurant on the Hill we will hopefully get a more impassioned clientele,” Lui says. “Plus, the Hill is one of the places that could use a little greening up, especially because it is such a symbolic part of Boulder.”

Merino says he’s happy to see Half Fast be a part of Earth Day and the movement to make businesses in the county more green.