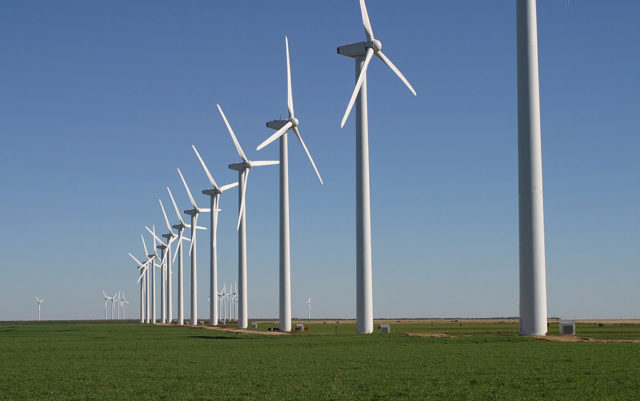 Wind doesn’t abide by state lines or other human-made boundaries. Air moves fast or slow depending on atmospheric conditions, but when its kinetic energy is harnessed by a turbine and converted to electrical energy, the stream slows down a bit, creating a wake downwind. This is a problem when multiple turbines, and even entire wind farms, are trying to extract energy from the same windstream — a problem researchers have been analyzing closely.

Published in late November in the journal Nature Energy, a new study combines atmospheric modeling with legal and economic analysis to discuss the potential impacts of build-out on the renewable energy economy in the U.S. and elsewhere.

Daniel Kaffine, from CU’s economics department, first theorized about the possibility of upwind wind farms limiting potential energy of downwind wind farms in a paper published almost a decade ago.

Julie Lundquist, an atmospheric scientist from CU and the lead author of the study, had already been studying wakes on individual turbines, but used Kaffine’s economic paper as a catalyst to understanding the phenomena on a larger scale.

Conducting research in Texas between 2011-2015, Lundquist and her team found strong wake effects tend to occur at night, when relatively warmer air moves above a colder ground with less background turbulence. “That’s kind of good news, because that means that although wake effects are there, and they are significant and potentially have really large economic consequences, they are also very predictable,” Lundquist says. “Because they are predictable, they can be managed.”

Nearly 90 percent of wind farms in the U.S. are located within 25 miles of each other and wakes from turbines can travel at least that far, carrying with them the possibility to reduce a neighboring wind farm’s energy production. According to the study, the average energy loss to the downwind wind farm is about 5 percent, while the peak loss could be as much as 20 percent, depending on wind conditions, direction, speed and various other factors. Based on Kaffine’s economic modeling, this translates to an estimated revenue loss of $3.7 million over several years, or roughly $730,000 annually, a significant loss on just one wind farm.

Kaffine compares it to the free-for-all oil and gas industry at the turn of the 20th century, dramatized in There Will Be Blood.

“The issue of course is that oil pools and gas pools aren’t under any single property, so what you saw was massive build-outs of oil rigs all trying to tap into the same resource,” Kaffine says. “Because of that it actually ended up in much less output from those oil fields than they otherwise would have gotten. Essentially everyone was sort of interfering with each other, trying to rush to get the oil out of the ground.”

The decentralized and uncoordinated draw on physical resources quickly became economically inefficient, and the result was a number of laws and measures — like well spacing or profit sharing — implemented across the country to regulate extraction for the benefit of companies.

However, no such legal structure yet exists for the wind energy industry, and there are virtually no substantial regulations at the local, state or federal level to address these issues, researchers found.

“This is going to turn out to be very similar to water rights going forward,” says Justin Sharp, who has worked in wind energy since 2005 as a meteorologist and consultant.

“I don’t think the industry understands how big the issue is [going to become] when we start building out at the levels that we’re going to be going to,” Sharp says, “assuming that we do have a full transition to renewables from fossil fuels.”

Sharp says coordination is key in order to ensure that power generated by wind is consistent enough to meet our energy needs. “If we don’t coordinate where we build our wind plants in a way that makes sense from the fuel supply point of view,” he warns, “then you could get into a situation where you don’t have power when you need power.”

Sharp is currently working with NREL on mitigating these effects by planning wind farm expansions more intelligently. And Lundquist and her team are focusing on wind patterns off the coast of Massachusetts, as the state plans to shut down coal-fired power plants in favor of offshore wind farms.

“Lots of things need to be balanced in terms of deciding where wind farms are located, and right now we’re just saying that the wake effect needs to be part of the planning process,” Lundquist says.

When Kaffine first looked at the issue a decade ago, wind production made up about 1 percent of U.S. electrical generation. Now, it’s grown tenfold, and is expected to increase as some states, including Colorado, have laid out ambitious renewable energy goals.