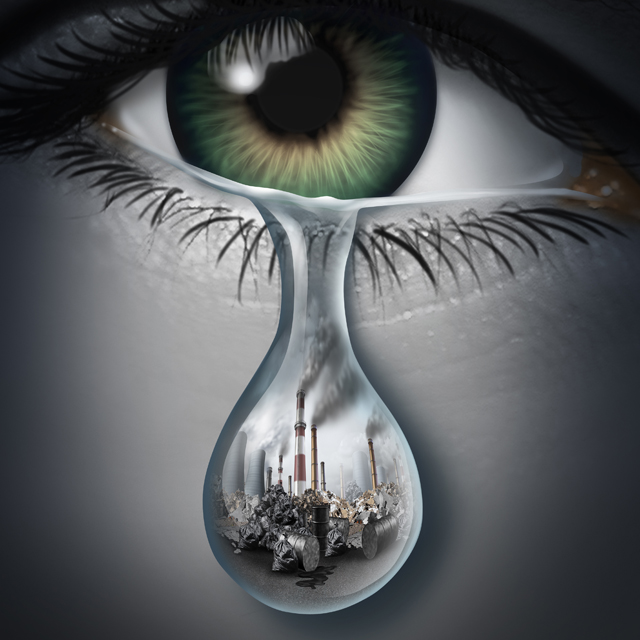 It was almost one year ago when researchers, politicians and activists from around the world hiked up a mountain in western Iceland to commemorate Okjokull — the country’s first documented glacier lost to climate change. The memorial was a somber event, according to media reports, as about 100 people gathered, hoping to bring awareness not only to the impacts of climate change, but also the profound sense of loss that comes with it.

A plaque installed at the site of the former glacier reads: “In the next 200 years, all our glaciers are expected to follow the same path. This monument is to acknowledge that we know what is happening and what needs to be done. Only you know if we did it,” solidifying the sense of doom felt by many across the globe.

“The climate collapse that we’re experiencing is bringing up anxiety and trauma and sadness for many people,” says Joy Redstone, director of Naropa University’s Community Counseling Center. “People are struggling with the idea of how much we’re losing and how much is changing and what the lives of our children and grandchildren might be.”

It’s a condition commonly known as eco-anxiety or climate grief and a growing field of study as medical professionals, environmental activists and experts seek to understand our collective response to a warming planet.

According to an American Psychological Association (APA) 2017 report, the mental health implications of climate change include stress, depression, anxiety, and a strain on social and community relationships, as well as an increase in aggression, violence and crime. Climate change can cause certain psychological responses as well, such as conflict avoidance, fatalism, fear, helplessness and resignation, all of which are growing, according to the APA.

Researchers Ashlee Cunsolo and Neville R. Ellis describe ecological grief as “a form of ‘disenfranchised grief’ or a grief that isn’t publicly or openly acknowledged,” in a 2018 paper published in the journal Nature Climate Change. “Indeed, ecological grief, and the associated work of mourning, experienced in response to ecological losses are often left unconsidered, or entirely absent, in climate change narratives, policy and research.”

“I wanted to connect with other people that were thinking deeply about this issue and feeling deeply about it,” says the climate scientist who wishes to remain anonymous due to privacy concerns. He defines grief “as having love for something that’s no longer there.”

Climate grief can come in the aftermath of natural disasters or the extinction of a certain animal species or when a place of particular significance becomes unrecognizable. But it can be a very different experience than personal loss.

“When my grandmother leaves, one of the sources of my grief is that that person who loves me is no longer on this earth,” he says. “There’s the non-reciprocity of climate grief as opposed to personal grief.”

Ecological grief is an ongoing process where healing is an ever-moving target, compounded by increasing levels of loss and destruction. It’s an attempt to create individual meaning out of a complex and existential situation, a way to find our place in the world of solutions.

“It’s an active grief process — as we connect with the feelings [about] our connection to the environment, we have the benefit of being able to potentially see real change emerge from that,” says Naropa intern Joanna Lester, who will be leading another Eco-Resilience group with fellow intern Elizabeth Bruce beginning in September. “This is a really beautiful invitation for folks to explore the depth of what kind of meaning we want to carry forward into forming a more sustainable future planet and what our relationship to that really looks likes like.”

Before someone can express their shock and their sadness, they can’t really get angry. And until they can feel and express some anger then it’s very hard for people to engage in action.”

Before someone can express their shock and their sadness, they can’t really get angry. And until they can feel and express some anger then it’s very hard for people to engage in action.

The group will follow the “10-Steps to Personal Resilience and Empowerment in a Chaotic Climate” laid out by the Good Grief Network. Formed in 2016 by co-founders Laura Schmidt and Aimee Lewis Reau, the program covers topics like accepting the severity of the situation, acknowledging that we as individuals are both part of the problem and solutions, sitting with uncertainty, honoring mortality of all living things, and reinvesting in meaningful efforts. Lester says she also plans to include other resources that “bring more focus toward marginalized voices on this topic.”

Five hundred people have gone through the program directly with the Good Grief Network, and countless others in community groups like what’s being held through Naropa, according to Schmidt. Groups have sprung up all around the country, expanding beyond our borders in places like the U.K. and Australia. Schmidt developed the program through her graduate work at the University of Utah where she studied under conservationist writer Terry Tempest Williams. It’s modeled after other peer-to-peer support groups like AA, with a personal rather than social focus.

“We do frame it as collective grief. We do frame it as we’re here to talk about these big collective systemic issues,” Lewis Reau says. “But we realized that everything is viewed through the lens of personal experience: We always come with our own grief and our own perceptions.”

Hospitalized at the age of 21 for depression stemming from her social justice work, Lewis-Reau was a self-described “burned-out activist,” until she met Schmidt and the two started developing the Good Grief Network.

“I started realizing quickly the power that happened from sitting in community,” she says. “And once I started really experiencing the 10 steps, I came to life.”

It wasn’t only the group discussions that impacted the climate scientist in the previous group at Naropa. There were the meditations and silent reflections, even some art therapy mixed in (before the group ceased meeting in person due to the pandemic).

“That opened up a new experience for me to connect with my feelings in a nonverbal way,” he says. “I didn’t realize that I was lonely until we were asked to draw a picture of our experience with dealing with climate change. And it just felt as if it was me versus the world. That was a major takeaway of insight into my experience that I wasn’t even aware of.”

Although he doesn’t keep in touch with other group members, just the process has helped to dissipate that loneliness, he says.

Oftentimes grief can immobilize us, leaving us stuck in feelings of despair and hopelessness, all of which only exacerbates the problems.

“These responses are keeping us, and our nation, from properly addressing the core causes of and solutions for our changing climate, and from building and supporting psychological resiliency,” according to the APA study.

This sense of resiliency and collective action is our only way of avoiding climate catastrophe. By helping people express their grief and move through a healing process to become more resilient, the Naropa facilitators hope to spur participants to create meaningful change.

“You can be sort of immobilized by the enormity of it all,” Redstone says. “But if you can move through some of the grief, then you can move into whatever level of personal or communal action that feels healthy to you.”