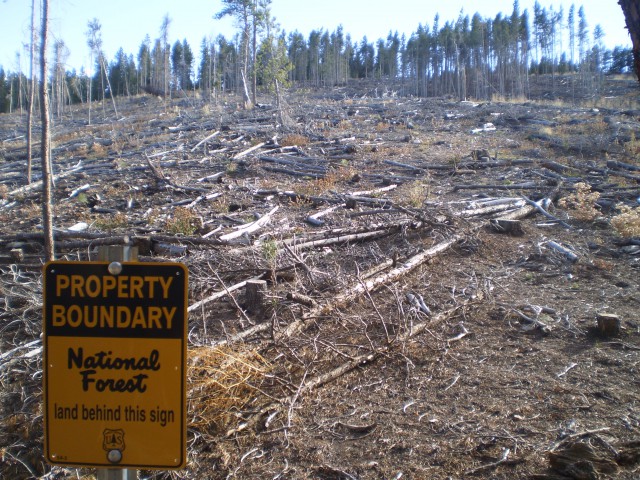 Drive along Highway 119 south of Nederland or Highway 9 south of Frisco and you’ll see large swaths of bare soil and scattered slash — including entire hillsides — where once there was forest. These aren’t future subdivisions, but the Arapaho and White River National Forests.

The U.S. Forest Service is undertaking logging with the goal of keeping communities and the forest safe from wildfire. The project is funded by taxpayers to the tune of $1,200 per acre. But some locals, upset about the changes to the forest they know and love, are questioning if logging can really protect their homes and whether wildfire is as much of a threat to the forest as they’re being told.

Some residents of the mountain towns Nederland and Frisco are up in arms about these “fuel reduction” logging projects. Forest Service efforts often include cutting down thousands of acres of public forests that many enjoy as a quiet place to recreate, including the popular West Magnolia Mountain Bike Trail in Nederland and the section of the nationally renowned Colorado Trail outside of Frisco.

The Ophir Mountain Forest Health and Fuels Reduction Project consists of 1,500 acres of clearcuts in the White River National Forest outside of Frisco, with trees chipped and trucked 70 miles to the Eagle Valley Clean Energy biomass facility in Gypsum. The Lump Gulch Fuel Treatment Project will cut 500 acres in the Arapaho National Forest outside of Nederland, with much of the material piled to burn on site, according to Marcia Gilles, public affairs specialist for the Arapaho National Forest. Both areas have recently experienced the native mountain pine beetle, an epidemic that peaked between 2007 and 2009 and has since subsided.

The Forest Service contends that logging these forests, which are in some cases miles from the nearest home, will “protect communities and restore natural processes to forest ecosystems.” Yet some Coloradans point to science demonstrating that logging is often ineffective at stopping large wildfires and can even make them spread more quickly by opening the forest to sunlight and wind.

“We have learned that forest thinning is rarely effective under extreme burning conditions, and the severity of fire in adjacent forests has little to do with whether a home burns,” says Tania Schoennagel research scientist at University of Colorado Boulder’s Institute of Arctic and Alpine Research and co-author of a new study titled Learning to Coexist with Wildfire.

While the wisdom of logging to prevent wildfire continues to be debated, the most effective action homeowners can take to prevent their homes from burning is to tend an area 100 feet to 200 feet surrounding the structure, called the home ignition zone, according to the Forest Service’s Rocky Mountain Research Station. One study showed 95 percent of homes with metal roofs and a maintained area of 30 feet to 60 feet survived fires.

Vivian Long of Nederland, president of the Magnolia Forest Group, says she doesn’t subscribe to the Forest Service “rationale of logging for fire protection to save us from the big fire.” She’s concerned that clearcutting will simply create another “spindly, lodgepole thicket” in the forest, which the agency might want to log again in the future for the same reason. Her group is in discussion with the agency in hopes of amending some of the ongoing logging in the area.

As in Nederland, locals in Frisco are concerned that logging will have a negative impact on recreational resources that are a national draw, including ski areas and the Colorado and Continental Divide trails.

Having spoken to forestry experts and studied the woods as he hikes, Howard Brown of Silverthorne says he would prefer to see the lodgepole pines around trails like the Peaks Trail left alone to eventually become spruce-fir climax forest, rather than turned into a “war zone.” He’s worried about the harm to the local resort community of Breckenridge, as the clearcuts transform from “thickets, to overgrown Christmas tree lots, to dense scrawny lodgepole monoculture.”

“When you live next to the forest, there’s a chance there’s going to be a forest fire,” says Frisco resident Don Cacace, who has opposed the Ophir Mountain project since its inception. “The last thing we want to do is cut down the forest.”

No one denies the inevitability of wildfire in Colorado. Rocky Mountain forests have evolved with fire over the millennia as a natural and essential component of western forest ecosystems. Fire kills off some trees to make room for future growth, returns vital nutrients to the soil and creates wildlife habitat.

Over the past century, attempts have been made to suppress wildfire out of concern for communities and at the behest of the timber industry. The perspective of industry, the Forest Service, and some environmental groups is that fire suppression has resulted in overgrown forests full of dangerous “fuel” — either dense stands of live trees or beetle kill — that is causing more frequent and destructive wildfires. The proposed cure for these sick forests is a logging prescription that will restore the forest and keep people safe, while gleaning some merchantable lumber or biomass energy.

Recent science has challenged these assumptions, demonstrating that wild fires, including large, catastrophic ones, were historically quite common in Colorado and that large fires are more a product of drought, high temperatures and wind than fuel levels. Studies have shown that large wildfires are often just as likely to burn through clearcuts devoid of most fuels, as they are through densely-stocked forests.

While beetle-killed trees in the Rockies have been impossible to ignore, Bill Romme, who teaches forest and fire ecology at Colorado State University, says there is “little or no such relationship between beetle-caused tree mortality and subsequent fire occurrence and severity in lodgepole pine forests,” as quoted in an article written for NASA’s Earth Observatory.

Scott Fitzwilliams, forest supervisor of the White River National Forest, acknowledges the controversy, yet explains the need for projects such as Ophir Mountain and the upcoming Keystone Vegetation Management to give firefighters a “chance to protect homes, property and power lines.” He is also concerned about what’s going to happen over the next few years when beetle-killed trees start falling, risking the safety of recreationists and creating a “tangled mess.”

As more and more people inhabit Colorado’s forests, the chance of a community experiencing wildfire increases. Federal, regional, state and local grants are available for home treatments, while Saws and Slaws is bringing community members around Nederland, Coal Creek Canyon and Sugarloaf together to make homes firewise and feast together afterward, with projects starting up again in the spring.

No matter what happens in the forest, Fitzwilliams says the Forest Service is going to feel the heat. If they cut trees in an attempt to prevent wildfire, they’ll be criticized by those who’d rather see nature take its course. If they do nothing and a wildfire ignites, they’ll be blamed for that, too. Fitzwilliams says there’s science and emotion on all sides of the issue, and adds “we’re going to have to make some choices that are sometimes hard to swallow.”