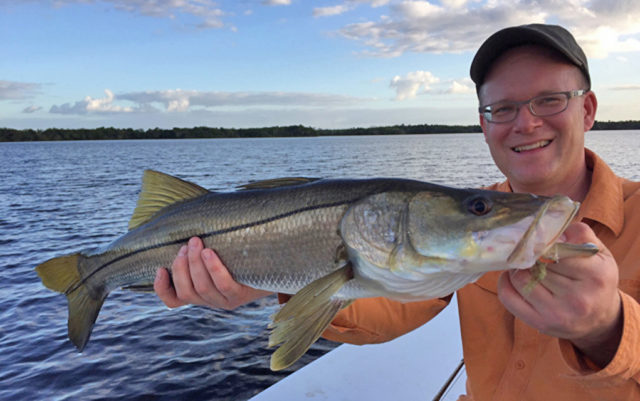 Fishing books and magazines tend to lock in a certain archetype: a fisherman clad in expensive gear surrounded by pristine wilderness marveling in the beauty and peace nature provides. But in his new book, Fishing Through the Apocalypse: An Angler’s Adventures in the 21st Century, writer Matt L. Miller shares a different vision of fishing and fishermen.

“I love to fish, but I didn’t want it to be about fly fishing and the deeper meaning of life. There are many books that do that already,” he says. “I think it’s a skewed way of looking at the world and of looking at fishing. On the fringes, outside the pages of magazines, you’ll find some really interesting stuff happening.”

In the book Miller looks at the current reality of fishing and the future ahead. His adventures take him to urban fishing canals and ponds stocked with trophy fish that can be caught for a fee. He chronicles the work being done to preserve the environment that remains and reverse the ever-worsening effects of climate change. By taking a step away from the stereotypical fishing standard, Miller encourages readers to get out and enjoy the multitude of offerings that exist in the everyday world.

For nearly two decades, Miller has worked for the Nature Conservancy, specifically running its blog, Cool Green Science. He’s been an outdoorsman and a writer since childhood, penning his first conservation essay in elementary school about an area in his neighbored that was being developed.

“That has been a theme [in my life],” he says. “And for any of us who spend time outdoors, if you have your eyes open, you have seen places that you love lost.”

Miller grew up in eastern Pennsylvania alongside a stream that had been biologically dead for four generations due to acid mine drainage from nearby coal mines. Miller never considered that the river was out of the ordinary, but as he got older, he realized at one point in time, it had been much healthier.

“It would have been every bit as abundant as [a waterway in] Alaska. We consider Alaska as exceptional now, but at one point, that was the reality of rivers everywhere,” he says. “They were just brimming with migratory fish runs. So, I thought, ‘What have we lost? And what is the abundance that’s out here today?’”

With that in mind, Miller began his search for the opportunities that exist in modern-day fishing in all its “glory and weirdness,” as he says. His quest took him to urban fishing spots like Miami’s canals where he had to dodge condoms and human excrement to fish for exotic fish from the Amazon and Africa, who’s migration had led them places far from home. He looked at fishermen who had shifted focus from catching large game to tiny minnows. He monitored the changing trend of those opposing fish stocking in favor of catching native species that have been considered “trash fish” in the past.

Fishing Through the Apocalypse also led Miller to take a hard look at the environmental pressures facing fishing, from warming waters, species dying out at alarming rates, loss of public lands and the barriers for the survival of fish species, such as the existence of man-made dams blocking migration pathways.

To help improve conditions, Miller implores fishermen to learn more about the creatures they’re catching and the environments they depend on for survival. The more fishermen learn about issues like water flow, food supply and seasonal movement, the better and richer experience for the fisherman and the fish, Miller believes.

“Anglers can’t afford to be ecologically illiterate or we’ll lose fishing,” he says. “It’s as simple as that.”

Miller is hopeful for the future, and he adamantly strays away from the “doom and gloom” tone environmental protection can take. He still believes there is time to choose the world we want to live in. As his book title suggests, conditions might be bleak, but opportunities still abound.

“If you were coming [to Earth] as a completely unbiased observer from outer space, and you saw it a few thousand years ago and you saw it today, you would say, ‘This is the end times,’” he says. “But I think, if you have a fishing rod and an open mind, you can still enjoy it.”