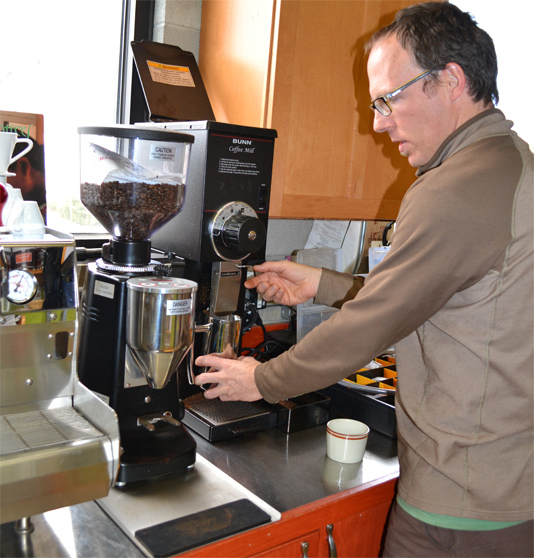 The company won the 2011 Micro Roaster of the Year award from Roast, a magazine dedicated to the craft. So if they’re trying not to make an impact in the coffee-roasting industry, and in the Boulder community, they’re failing.

Their environmental impact, though, couldn’t be much lower.

A certified organic and fair-trade roaster, Conscious Coffees has been providing coffee to Boulder companies for 15 years. Their single-origin coffees can be found at The Cup, Folsom Street Coffee House, Whole Foods, The Kitchen and Arugula, among others.

“We chose them because coffee was of paramount importance to them,” says Wendy Ball, owner of The Cup. “They wanted to make sure that we brewed it correctly and represented it correctly. That showed us their dedication to a quality product.”

That dedication goes beyond just a quality product.

Mark and Mel Glenn, the owners of Conscious Coffees, have taken extreme measures to be sure that their company is environmentally sustainable.

“It’s pretty simple,” Mark Glenn says. “We’re focused on a circle. In that circle are four people: the producer, us, the retailer and the consumer. Our goal has always been to link all four of those parts together, and it’s working.”

Their circle begins with the producers, the growers of the coffee beans, and theirs are found all over the world: Africa, Asia and Latin America. The Glenns create long-term relationships with specific communities in these places and others, and they visit and work with those communities to improve both the coffee they’re producing and the lives of the people in the community.

“Some years the coffee’s good, some years it’s not as good, but we stick with them,” Glenn says. “We don’t move on to the next community, because then everything we’ve worked up to at that point, it just gets knocked back down and they have to start over. It’s so easy in our industry to get hyped up about the greatest-tasting coffee, but what’s more important to us is a long-term relationship.”

They also ensure that the growers are paid what’s fair, and show their consumers just how that process works. On their website, www.consciouscoffees.com, consumers can find out just where their coffee came from and how much the farmer was paid for it.

“We want all four members in the circle to have the same ability to learn that information and to validate that information,” Glenn says. “The key is to remain transparent, so the story remains intact and accurate. We eliminate the middlemen and we listen to [the growers’] challenges, so we can bring that information back and tell the consumer exactly what’s going on down there.”

And though their focus is on the grower, their product shows that they haven’t ignored quality. The international Roast competition involves around 30 applicants in two categories and applications the size of books.

“It’s been great for us,” Glenn says of the award. “It’s validated the fact that someone who is doing a 100 percent direct-trade, certified-organic business model, can take an award like this.”

“They’re just a very well-rounded company,” Blumhardt says. “They handle the sustainability issue with kid gloves, and they do such a great job with their community. In the end, their coffee just stands out. They have very balanced coffees, they bring in only the best green, and it really shows in everything they do.”

That balance is likely due to the 15 years of experience Glenn has in roasting coffee. He and Mel started the wholesale roasting company in 1996, in Breckenridge. He had been working as a barista and realized he wanted to learn about what went into the coffee before it reached him — and customers.

“I wondered, what’s the other side of coffee?” Mark Glenn says. “I knew the barista side, the interaction socially with my community and providing people with beverages that made them happy, and having that social conversation. That was awesome, but I wanted to find out, where does coffee come from and what is it like there?” He found out by visiting each of his growers to build relationships.

“It was difficult in the past, because I was being awakened to the realities of poverty, and it took many years to understand and decode what was going on,” he says. “But just getting there and spending time with those folks is incredible.”

When he visits, he brings photos and stories of where their coffee is going, how it traveled, and who ends up drinking it. It’s an attempt to close the circle from the other side — to show producers where the product that they spend their lives growing goes.

They show growers photos of the roastery, which is brightly painted and covered with photos of the growers the Glenns have met over the years, and of the 300-pound trailers they use to bike-deliver the coffee.

“They deliver it on bikes!” Ball exclaims. “I don’t think people know what lengths they go to to follow their ethical values.”

Those values include packaging their coffee in reusable and recyclable steel-content cans, which cost five to six times more than traditional foil packaging that ends up in landfills.

“Year after year we kept getting stores asking us for a packaged product, but no one could find a sustainable source of packaging,” Glenn says. “So many of the bags on supermarket shelves end up in a landfill forever. It’s not worth retailing a packaged coffee if we’re going to be contributing to that. But this option finally became available to us a few years ago. It’s fantastic. We can be on the packaged market, but we’re not using bags that get thrown away.”

The company produces only one five-gallon bucket of trash a month. The rest is recycled, composted, reused or given to farmers. They’re also selective about who they’ll sell their coffees to.

“We need to align with our customers,” Glenn says. “We need to have a reciprocating relationship where we work together to represent the coffees that are coming from these producers, both scientifically and artistically, and they need to be committed to the sustainability movement and some of those other movements.”

They take on only a fraction of prospective customer accounts each year.

“That’s not your father’s business model, right there,” Glenn says.

But it is a father’s business model.

Conscious Coffee is, ultimately, a family-owned business that focuses on the family they’ve created with growers and customers and within the company. Next to the wall map that documents everywhere the company has been, and plans to go, is a drawing by Mark Glenn’s 5-year-old son, Eli. It’s of Mark and Eli, in a typical 5-year-old’s style, with one exception — they both have hearts practically bursting out of their line-drawn chests.

And if there’s anything that defines Conscious Coffees, it seems to be big hearts.