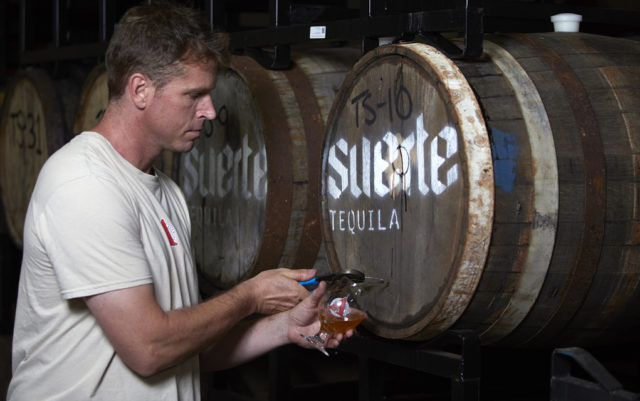 Andy Parker is not a meteorologist. He runs the barrel program at Avery Brewing, and 16 years into his tenure at the brewery, is a seasoned jack of all trades who has his figurative hand in every brew the company puts out. But he can’t read the weather, and so he has no idea what made this year’s batch of Colorado spruce tips in the Fall Day IPAs we’re drinking at one of the bars inside the Avery mothership in Gunbarrel taste like cantaloupe and not like pine, like they have in previous years.

“I haven’t really bothered to do research on it,” Parker admits. “If we were to [make Fall Day] on a large scale, we’d want it to be more consistent from year to year. But on the small scale, we can have fun. It’s stress-free to get a really good supplier and do it from year to year.”

Avery has 30 beers on tap at all times. About 10 of them, you can’t get on tap or in bottles or cans anywhere else. Beyond those 30 tapped beers, Parker and the rest of the brewing team have several kegs of experimental beer that they sample multiple times over the course of weeks. And beyond those kegs, there are growlers filled with various beers, often filled with various herbs, spices and other flavor-making additives.

If there’s one thing I learn walking around the Avery facility with Parker, checking out these beer trials and chatting about spruce tips, it’s that despite the brewery’s growth over the years, they still like to push the envelope. In fact, their growth has enabled them to refine their process.

Take the Bug Zapper, for example. A brewer at Avery had an idea for the beer he wanted to create: a sour ale with ginger, lime and mint. So the team experimented: raw ginger and juiced ginger; dried mint and fresh mint; lime juice, peel and zest. They sourced ingredients from myriad producers, tried dozens of proportions, until, at last, Parker and a panel of Avery’s beer experts gave it the OK. They ran it through a cost analysis and, fortunately, the ingredients used in the chosen recipe worked out financially. It went to the taproom, where it flew out of kegs, and now the funky, precisely named ale is in cans and going gangbusters.

So how did they know when a beer that tastes like nothing else ever concocted was good to go?

“At some point you go around the room of people who have been in the industry for 10 to 15 years and they all say, ‘I’d buy this in a six-pack, this is awesome,’” Parker says. “Could you spend another month and make it another 5 percent better? Yeah, maybe. But at some point you just gotta call it.”

Not all beers get the seal of approval from the masses. Not even the folks at Avery know what’s going to take off. Real Peel, for instance, a zesty IPA that gets a kick of dry citrus from tangerine peel, was a hit among the tasting panel, but hasn’t gotten the traction that other Avery beers have enjoyed. On the other hand, El Gose, a German-style sour with lime and sea salt, is the company’s number-two seller nationwide despite the fact that Parker says he doesn’t like the gose style.

“I think we’re having a difficult time predicting what everybody wants anymore. I think everyone is,” Parker says.

But the key, Parker says, is committing to making the best in class and trusting their collective palate. Even though gose isn’t Parker’s favorite style, he stands by the final recipe because he knows they made the best version of that beer that they could.

That represents a slight change in approach for Parker and Avery. In the early days, when the market wasn’t so saturated, they could put out practically anything, and by virtue of being at the right place at the right time, they’d get customers. Now, with breweries still popping up across the country, the folks at Avery have had to adjust.

Parker travels the country trying the best brews from craft producers, hoping to pinpoint what the next big thing in brewing will be. When they pinpoint a style they‘d like to go after, Avery can use the resources they’ve amassed from their growth — including a team of scientists, a fully stocked warehouse of barrels, state-of-the-art brewing equipment serviced by the industry’s top technicians, a de facto tasting panel in their tap room, and a country-wide network of markets to sell to — not only to find the right mixture for that style but to get it to market before it gets flooded.

Right now, one example would be brewed IPAs. Created, literally, six months ago at Social Kitchen in San Francisco, brewed IPAs are made with an enzyme that chips away at sugars in the brewing process so that all the bitterness from the hops are stripped, leaving only the citrus or floral notes. It’s a style that’s primed to bombard beer shelves and tap rooms in the coming months, but Avery already has an experimental brewed IPA on tap (which Parker admits is not perfect) and two in the brewing process (which Parker says are much better). So the race is on to make a brewed IPA that tastes good and to get it to market.

“Right now, because of the internet, everyone knows about them,” Parker says. “We won’t be the first ones to have one in a can, but we’ll be close. Sierra Nevada’s trying to put one out right now. Our first effort was not great, but that’s OK.”

The thing is, some people mistakenly assume Avery’s growth is a precursor to the brewery making bad beer. But Parker says that in addition to the ability to get experimental and new beers before consumers earlier, the growth has enabled Avery to ensure quality. All the tanks at their old brewery off Arapahoe in Boulder were outside, and so even switching pipes off and on the tanks presented the chance for unwanted particles to get inside the brew. White Rascal, for instance, is as good as its ever been because every part of the brewing process is monitored and quarantined from contaminants at the new facility.

Too, the growth hasn’t just affected the technical parts of Avery’s process — it’s improved the collective wisdom of the brewers themselves. For instance, unsavory flavors they would’ve chalked up to “batch variation” 10 years ago, can now be pinpointed.

“Not every batch of our beer has been awesome,” Parker says. “We weren’t educated enough as brewers to know we were doing it.”

Several years ago, brewers kept tasting an off flavor in Ellie’s Brown Ale. They sent a sample to New Belgium, who had already installed an industry-best quality control team, and found out it was high amounts of acetaldehyde, a naturally occurring compound that tastes fine at small levels (Parker says the green apple flavor is the characteristic flavor of Budweiser), but kind of like a Sharpie at high levels. They didn’t know at the time acetaldehyde could taint a batch.

“We were like, ‘Oh shit, we just learned something.’” Parker says.

And so given their combined knowledge, Parker claims Avery hasn’t made a bad batch in seven years. He’ll stand behind everything Avery’s put out, even the experimental ones, because that’s all part of the process of creating great, unique, exciting beer. Knowing how to work with every ingredient that goes into Avery’s beer is the real reward for their growth, not whatever financial gains the company has made. They’ve learned to turn lemons into lemonade; to make canteloupe-y spruce tips into delicious IPA.