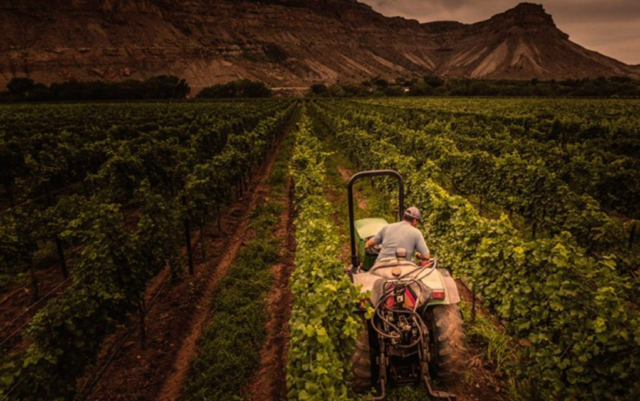 If this year were normal, we might be planning to head out to Palisade for the annual Colorado Mountain Winefest, a rip-roaring celebration of the Western Slope wine harvest, and an important revenue generator for the region and its wineries.

But the Winefest, along with other events, has been postponed until 2021. You can also add to the disappointment of 2020 a relatively low-yield year due to an early freeze, an ongoing financial crunch caused by the pandemic and, oh yeah, smoke for nearly all of harvest season from surrounding wildfires.

That said, winemakers are confident the quality of this year’s vintage will help keep the momentum going for the local industry, which has received a growing number of accolades. In just the last two months, for instance, Wine Enthusiast reviewed 70 Colorado wines (boosting the state’s profile) and gave nine of those wines a score of 90 points or higher.

And one way to look at the low 2020 yields in a positive light is to consider that vintners have been able to pay more attention during harvesting and processing. Take Balistreri Vineyards, which crushed its first harvest of teroldego grapes by foot and moved the rest of the “crush” inside when the snow rolled in. The grape is indicative of what makes Colorado’s wine industry unique — because it’s still in its relatively early stages, vintners are still tinkering to find out what grapes work best in our climate and in the micro-climates within Palisade. Teroldego, a rare grape grown typically in Alto-Adige, Italy, could thrive as a single-varietal red wine here, perhaps a blend — we’ll find out when Balistreri releases it.

Boulder’s BookCliff Vineyards, meanwhile, hauled in an impressive sauvignon blanc harvest — a harvest which began under smoky skies and endured the freak snow storm. You can join BookCliff, by the way, for a virtual tasting on Thursday, Sept. 17 at 5 p.m. via the winery’s Facebook page.

Look, it’s been a rough year in a lot of industries, wine included. And though the yield is low this year for Colorado producers, availability of imported wine is likely to be somewhat limited too: imports to the U.S. from France and Italy are down 23% and 18% respectively for all foodstuffs, including wine, according to a recent analysis by Jungle Scout.

But you might also find now’s a good time to enjoy some choice vintages from Colorado winemakers. Settembre Cellars, in Boulder, recently released its 2015 chardonnay. Settembre’s taproom was closed for most of the pandemic, but recently launched some excellent winemaker-paired dinners in conjunction with local restaurants and you can currently make reservations to visit the taproom.

So maybe we can forget about the troubles of 2020 with some good wine from years past, and when the 2020 vintages come up in a few years, maybe they’ll be the best things to come from this year.