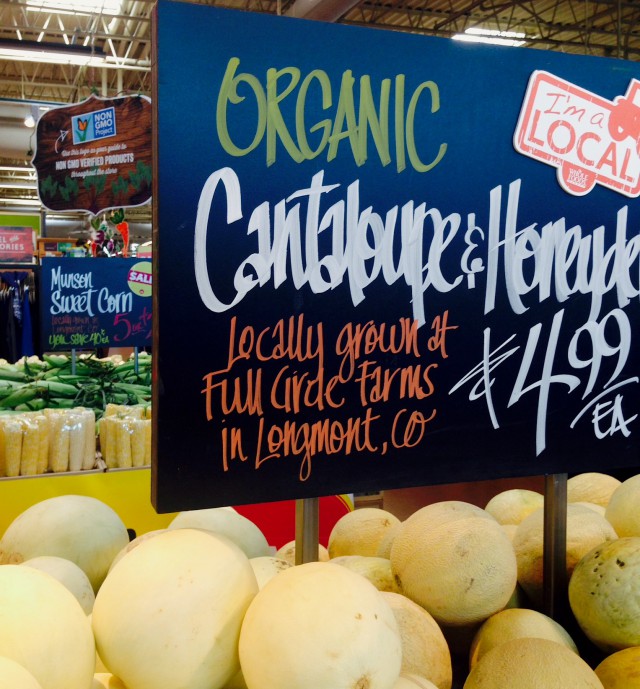 This is the second part of a two part series exploring what the word “local” means. Part one explored the meaning of the term for consumers, and part two will explore what local means for food producers.

For many growers, the term “local” varies by commodity.

“The things we grow are heavy,” reminds Stephen Koontz, professor of Agriculture and Resource Economics at Colorado State University. While selling locally may ease some of the burden of transport, it’s not alway possible for some items.

“There are some crops that all ripen within three weeks in areas that might see seven months of frost,” explains Koontz.

These will be more of a challenge for local markets to absorb — hence the need to contract with larger buyers who might sell Colorado cantaloupe to Nebraska or Palisade peaches to Maine. Small vegetable growers with green house tomatoes and sweet corn around Boulder are seeing a rise in demand for their crops and customers happy to pay more for locally grown produce that has traveled few miles from the field to the dinner plate.

For other commodities, such as field crops and grains, the local food movement has had more marginal effects. This doesn’t necessarily mean that they can’t be consumed locally, however. New dairies opening east of Boulder are buying local grains and silage for animal feed, with the milk soon being sold on local shelves. Barley for brewing beer is being grown, processed, guzzled and belched all in the same zip code in some counties around the state.

So what does “local” mean to Boulder farmers? The answers are as diverse as those given by the consumers of their produce. Many consider both food sold directly to customers and that through wholesale buyers to be local as long as it stayed within a certain geographical distance. Alvin Mascarenas, with the Farm Service Agency in Boulder County, works with a wide range of growers and considers local to be anything grown “right here in Boulder County.” Some farmers consider their buyers “local” if they are selling within the state’s borders and are excited to see a rising demand for their products in the mainstream grocery stores.

The Colorado Proud Program was created in 1999 by the Colorado Department of Agriculture to promote agricultural products within the state by helping to identify these items to consumers shopping at a grocery retailer.

The program began with 65 Colorado farms, ranches, greenhouses and food manufacturers, and now includes more than 2,000 different producers that participate. Stickers with the Colorado Proud logo can now be found on everything from onions to jelly, with many national chain grocers advertising Colorado-grown products on their weekly fliers to regional consumers. A 2014 presentation from the USDA’s Agricultural Marketing Service supports data that shows that more than half of all locally grown food is now being sold through an intermediated marketing channel such as a grocery store or restaurant.

“You can only bring your pumpkins home so many times,” explains David Asbury, whose Full Circle Farms and Rocky Mountain Pumpkin Ranch are planted in everything from squash to chili peppers along highway 66 in Longmont. One of the largest organic diversified vegetable growers in the state, he loves the interaction with customers he gets from direct-to-consumer retail sales at farmers’ markets, but with more than 1,000 acres of crops he is grateful that demand for locally grown produce has drawn his products through wholesale buyers to more shelves. He compares this business model to a three-legged stool with healthy relationships between the grower and local customers as well as wholesale buyers and retailers as the best way to provide quality produce at a fair price.

When he began farming locally more than 20 years ago, Asbury sold a higher percentage of crops directly to the consumer. Now, he has more of his crops going to local wholesale buyers. Each week he can walk the aisles of large grocery chains down the street from his farm and see his produce for sale next to imported fruit and vegetables from around the world.

“In Colorado, we’re not going to be growing your oranges, avocados or bananas,” he says. “But when you can buy local — well, let’s celebrate that.”

In Boulder County, restaurants are another major outlet for many local growers, with farm fresh ingredients making their way from garnish to main course. It is becoming more common to see the name of the supplying farm from which your pork belly and zucchini came listed right next to the wine pairings. Many restaurants have taken this one step further by developing or managing their own farms.

Asbury has advice for folks moving from any industry into production farming: “Buy two pairs of double-front Carhartt pants, because you’re going to spend most of your time on your knees either weeding or praying. ”

Whether praying for rain or praying for it to stop, divine intervention has some effect on if farmers sell directly to consumers or sign a contract with wholesale buyers that includes what is known as the “act of God” clause. Local farmers bring what they have to a farmers’ market to earn retail price on goods without knowing beforehand the total volume of sales. By signing a contract with a wholesale buyer, however, they have some assurance of being able to sell everything they have grown (albeit at a wholesale price). But that comes with the risk of not being able to deliver in the case of drought, pestilence or any other horsemen of environmental apocalypse. An “act of God” clause in a contract is a legal term for situations outside of human control that make the performance or delivery of the contracted goods an impossibility. Growers with higher volumes may be more likely to sell wholesale to large buyers who retail here in the county or state who include these clauses in contracts.

How much of an impact has the local food movement had on the agricultural sector? Data is cloudy. Not all local growers are reporting on direct-toconsumer sales and without a standardized definition of “local,” it’s unclear which products to track from the fields to their final consumption. While the local food movement has been encouraging to many of Boulder’s small-acreage farms, its effects appear somewhat patchy.

“It has been a great opportunity for a small number of growers that are well located and willing to work hard,” says Koontz of the local food movement. While Boulder is well positioned to reap some of the benefit he, like other agricultural economists, sees the local food movement as mainly affecting the margins of the agricultural sector in Colorado with, or without, a standardized definition.

After last year’s flood, Boulder farmers are hopeful for a good harvest this fall. Regardless of whether demand is high or low, “it’s all about the weather,” reminds Asbury. “Mother Nature is always the last at bat.”

When asked if he thought the local food movement would continue to grow and remain an important factor in how consumers decide on what’s for dinner, Asbury was quite frank. “I’m betting my life on it.”