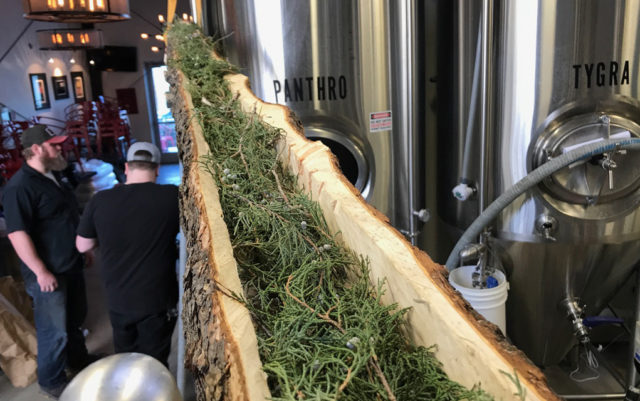 On March 16, Two Parts and the Colorado Brewers Guild will host the Collaboration Beer Festival down in Denver’s Hyatt Regency. With an aim to increase the collaborative community of craft beer, Collab Fest brings together 200-plus breweries to brew more than 100 unique, one-off beers. Creativity is the name of the game, and Colorado brewers are bringing their A-games.

Kicking things off is the beer that will likely win the longest-distance-traveled-award despite being a collaboration between Boulder’s Sanitas Brewing Co., BJ’s Restaurant and Brewhouse and Red Rocks Community College. The trio’s SMaSH (single malt, single hop) Brut Ale is fermented with space-traveled yeast.

As Sanitas co-founder, Michael Memsic, explains: RRCC gets a Colorado space grant every year from NASA for their balloon project, which they use to send an assortment of materials roughly 100,000 feet up, where the balloon pops and sends the materials back down. The goal of the project is to study how space travel affects the materials sent, and this year, the students sent up a half-gallon of ale yeast in honor of their homebrewing professor.

RRCC then contacted Sanitas and BJ’s to see what kind of beer they would make with it, and the two settled on a dry, zero-gravity SMaSH ale made with pilsner malt and galaxy hops so drinkers can differentiate between the malt, hops and yeast in the beer.

Back on Earth, Denver’s Mockery Brewing (one of the most creative brewing teams around) and Washington’s Hidden Mother Brewery got together to make a sahti (traditional Finnish farm ale) lautered through a freshly cut spruce tree.

Thanks to a friend who lives near Morrison, the two brew crews dropped the spruce, hollowed out a trough in the trunk, packed it full of needles and ran fresh wort through the tree several times — picking up oils, flavors and aroma — before fermenting the beer. If the smell created on brew day is any indication, Hidden/Mockery’s tree sahti will provide the best smelling corner in Hyatt’s ballroom.

As it is with Collab Fest tradition, each participating brewer is allowed two collaborations: one in state and one out of state. The exception is the brewery that invites the media to brew a third beer, and this year’s media collab fell to Golden’s Cannonball Creek Brewery, where Brian Hutchinson and Jonathan Lee invited the media to help them whip up a seven-barrel batch of Pre-Prohibition Pilsner. Made with two-row barley, a touch of flaked corn (in keeping with the pre-Prohibition tradition) and a ton of German hops (paying tribute to the ancestry of the brewers who helped build the American brewing scene), the beer will have a light body, a touch of sweetness and a huge hop profile.

Much like Hidden/Mockery’s tree-lautered sahti, Cannonball’s Pre-Prohibition Pilsner is a traditional beer with a forward-thinking spirit. Besides, it’s the only beer at the festival for which this writer toiled over a boiling kettle to drop in some hops.

Tickets and more info at www.collaborationfest.com.