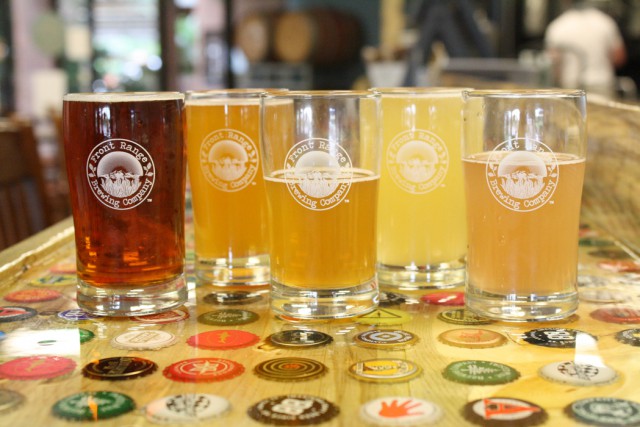 Artisan craft brewers have wider interests than their audience.

That happens with any art or craft, of course. The audience doesn’t always follow artists who push the boundaries. Katy Perry sells out more shows than Parenthetical Girls, and in this analogy, craft brewers are the band you’ve probably never heard of and beer drinkers are Katy Perry’s screaming fans.

Actually, I should just say the taste of beer drinkers, because in many cases it seems they’re only after one thing: bitter, hoppy beers. IPAs are by far the most popular craft beer style. New Lafayette brewery Front Range Brewing Company ran out of its IPA weeks before head brewer Chris Dutton thought he would, and after the beer ran out, the Alt Red — Front Range’s hoppiest creation after the IPA — became the top seller.

Take a look at how Dutton is spending his time, and you can see his interests are much wider than hopping up IPAs all day. He’s aging a coffee quad in rum barrels; he’s aging a peach Witte in red wine barrels; he’s finding a way to use real watermelon, not watermelon extract, in a beer.

And he’s not the only one. Twisted Pine owner Bob Baile says the brewery is transitioning to a wider variety of experimental beers. Wild Woods just tapped a coffee ESB. Gravity Brewing, as always, has a wide range of unusual beers, from a bourbon-barrel-aged Belgian blonde to an orange blossom saison. Upslope’s Lee Hill bar has a barrel-aged Scotch ale. Jamie Wells of J Wells is planning the return of his barleywine. Odd13 Brewing brewer Ryan Scott plans to barrel-age some of his beers. Bootstrap Brewing is aging three beers in barrels. And Avery, as always, has more beers brooding in barrels than I can count.

Sure, breweries are always experimenting with IPA varieties, too. But put it this way: Brewers seem to be making IPAs at the same rate they make any other beer; beer drinkers are buying IPAs way more than they buy any other beer.

And I don’t mean to suggest that breweries not making IPAs aren’t making money. But the reaction that I fear — which brewers routinely admit to at least considering, in the back of their minds — is that the almighty dollar will rule, and brewers will start to sacrifice creativity in the name of turning out another batch of the popular stuff.

I hope that doesn’t become the case. Especially at FRBC, which has an exceptionally good mango wheat, sweet and smooth, which I finished without even noticing. And Dutton’s ingenuity is on full display in the ginger saison, a Frankenstein’s monster of FRBC’s farmhouse ale and a saison aged in tequila barrels with ginger added. The spice is on full display, not overpowering but quite noticeable, and the beer is delicious. And the watermelon Witte is smooth and subtle, as real watermelon contributes a less powerful flavor than extract — which, Dutton says, had all been bought up by FATE to make its watermelon kolsch.

To which I say, hooray. I’ve read about hop shortages everywhere this year, although of course that doesn’t just mean lots of IPAs since almost all beers use hops. But a beer-related watermelon shortage? That sounds like one of them good problems.