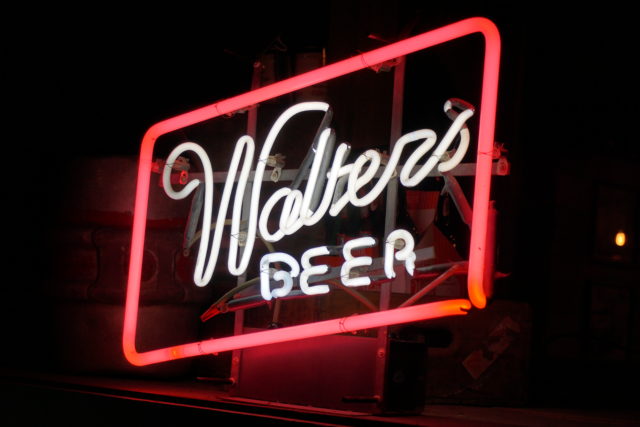 Maybe airplanes aren’t the way to go right now, but there’s plenty of Colorado out there to discover via the open road. And about 150 miles south, Pueblo boasts a revival of one of Colorado’s iconic breweries: Walter’s Beer.

Situated on the banks of the Arkansas River, Pueblo was commandeered by settlers in the mid-1800s before incorporation in 1870. Steel soon became the town’s industry, and an influx of workers brought families and the need for ancillary businesses, beer being one of them. That’s when Martin Walter, a German immigrant hailing from Wisconsin, purchased the Pueblo Brewery for $7,000 (roughly $200,000 in today’s money) and tagged it with his name. As of 1889, Walter’s Brewery was open for business.

Prohibition wasn’t far behind, but Pueblo paid no nevermind. According to Ed Sealover’s Colorado Excursions with History, Hikes and Hops: “Pueblo was a town that never really went dry during Prohibition, and its downtown is pockmarked with tunnels leading between various taverns. As a result, it was rumored to have more bars per capita than any town in the United States up until the start of the 21st century.”

At its height, Walter’s was distributing 100,000 barrels of beer a year. And like the other major brewery to the north, Walter’s marketed its beer as brewed with clean Colorado water. But the 20th-century nationwide consolidation of the brewing industry made business tough, and Walter’s was sold. The new owners closed the doors in 1975, and Walter’s Brewery started collecting dust.

Then in 2014 — after 10 years of convincing the Walter family that they could honor the tradition — siblings and Pubeloans Andy Sanchez and Diana Bailey resurrected the Walter’s Brewery & Taproom in an 1883 train depot on the industrial side of downtown. The back patio overlooks the tracks while the inside feels like stepping inside the watering holes of yore. The walls are decorated with memorabilia, one of which is a news clipping of Frank Bensik, who spent 12 years saving 32,400 Walter’s Beer can pull tabs to make two large “curtains” for his bedroom. That’s not something you’re likely to find in a brewery ’round these parts.

Nor are the beers on tap: Practically all taste like delicious throwbacks. None more so than the Original Walter’s Pilsner, a pre-Prohibition recipe with a wonderfully unrefined quality: Neither rustic nor masquerading as such. It’s grainy on the nose, cold in the mouth, clean in the throat. To drink it is to know what all those steelworkers quenched their thirst with after a long, hot day at the mill.

Per the German/Wisconsin/19th century brewing tradition, Walter’s core lineup stays on the lager side of life — Original Pilsner, Walter’s Blood Orange Lager, Bock, Coffee Bock, Lemon Shandy and Pueblo Chile Beer. But Walter’s colors outside the lines with a pumpkin ale (brewed with pumpkins for color, pumpkin spice for flavor) and Colorado Strong Pale Ale, its hoppiest beer on the board. The brewery even feature a line of hard seltzer.

Though production isn’t nearly what it used to be — Walter’s produced 400 barrels in 2019 — it still distributes, primarily to Loaf ‘N Jug and grocery stores (per the bartender), and A Okay Liquor at 2690 28th St., Boulder. But, for the full experience, a trip to the Pueblo taproom is in order. Breweries of this stripe are a dying breed; better get while the getting’s good.

For far too long, Pueblo chiles have been overshadowed by the nationally known (and better marketed) Hatch green chiles of New Mexico. There’s no reason for such a slight: Pueblo chilies are meatier, have a more pronounced pepper flavor, a smoother burn and a spectacular taste. No wonder they’re the key ingredient in Walter’s most popular pour.

Walter’s Pueblo Chile Beer pours an attractive gold with a soft, sheen of foam on top. One whiff will let you know there’s spice a-coming, but it won’t shear your nostrils. Nor does it cook your palate, though you’ll definitely get heat. Drink it with a sandwich and you can leave the giardinieras off. Drink it with roasted nuts and it’ll soak up the salt with ease. And if you need just a little more oomph, Walter’s serves Pueblo Chile clamato-style — on the off chance that you had one too many the night before.