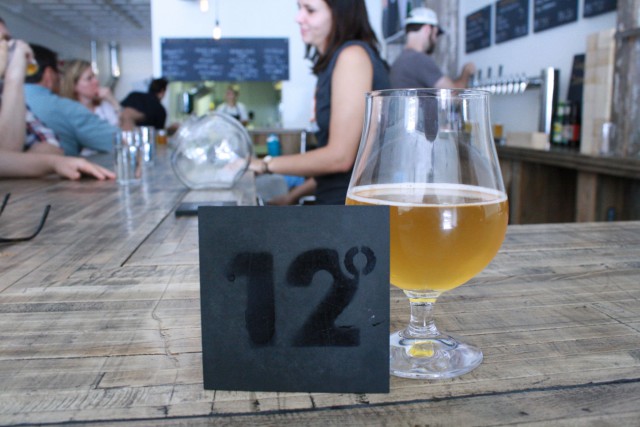 Louisville’s Main Street is such an ideal small-town drag that it looks like it was pulled from The Truman Show. But it now has full credentials as a Colorado Main Street, as on June 26 it picked up the missing ingredient: a craft brewery. Belgian-centric brewery Twelve Degree Brewing Company, founded by head brewer Jon Howland, has popped up in the Main Street Marketplace next to the Empire and across from the Rex.

With the Boulder Weekly staff scattered to the winds last week, I had to turn to the competition for a drinking buddy. My mystery colleague, a Boulder beer veteran, was making his first trip to Twelve Degree.

Summer at a Belgian brewery means a saison, naturally, and Howland plays this one straight — no honey, passion fruit or peach added in. The mystery colleague orders one despite some misgivings.

“I’m not normally a saison guy,” he says. “They’re normally too dry.”

Twelve Degree’s is a little less dry than some others, he says approvingly. The Tripel, meanwhile, is quite dry, with citrus and spice overtones and a much-appreciated lack of yeast, keeping the beer refreshing on yet another hot day.

But from the preview of Twelve Degree’s brewing schedule that Howland gives me, it sounds like the top beer for hot days is Walter’s White, which he says he’s brewing more of. The Witbier is smooth and a tiny bit floral, with minimal Belgian yeast flavor and a short aftertaste. Also on Howland’s brewing schedule are new versions of some of the beers currently on tap, like the saison; Howland says everything coming down the pipe for Twelve Degree is Belgian.

But the perfect order for taking a seat at Twelve Degree’s outward-facing bar and people-watching on Main Street is probably the four-beer sample, which at the moment is the saison, the white, the tripel and a Hommelbier, a collaboration with Boulder brewer FATE. Despite their recent popularity, Belgians still aren’t the most well-known or well-understood beers, and given the varieties even within one style, trying before you buy a full pint is a good idea. The four-taster sample illustrates an odd aspect of Belgian beers: As different as the flavors are, all four are basically the same shade of wheat-y orange.

The sample comes in a simple wooden box that’s in keeping with the brewery’s stripped-down, untreated wood aesthetic, including the scraped-paint floor. It might be the brewery’s newness, but the atmosphere at Twelve Degree is one of the most welcoming and talkative I’ve seen. On my first visit on Twelve Degree’s opening day, conversations among strangers were common along the brewery’s long bar.

While the brewery has developed pizzas in its open-air kitchen, it was beer only for the crowd on a Thursday after work. And even though — or maybe because — we’re in the heart of Louisville’s Main Street, it has the homey feeling of a neighborhood bar. That’s the kind of place that many brewers say should be replicated in every neighborhood, and it’s the same feeling we’re looking forward to this week, as we visit Front Range Brewing Company in Lafayette, another new addition to the Boulder County beer scene.