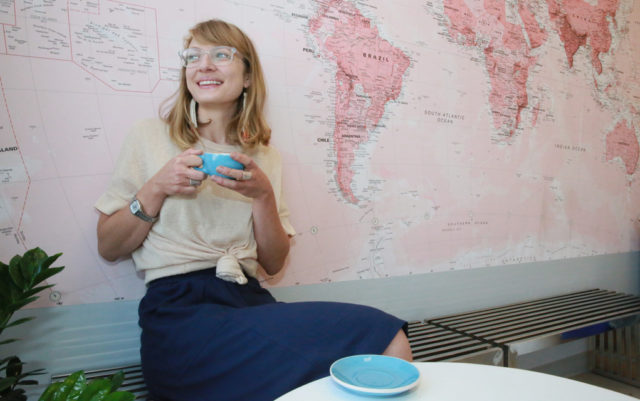 Many people take many photographs of many foods every day. Many of those photos — taken in poor lighting and at odd angles because the photographer was too embarrassed to be seen taking a photo of a beautiful plate of food in public — are bad.

But good food photography can move the viewer like any form of art. Stirring shots of the food scene, from farm to table, leap off the page or screen and compel the viewer to act.

Rebecca Stumpf, a Longmont freelance photographer, who has completed dozens of stunning food photography projects for local and national food producers, retailers and publications, says there’s a trick to good food photos: they have to tell a story.

“I’m trying to create these images for editorial or commercial use that still have a storytelling aspect to them,” Stumpf says. “As humans, we connect to pictures because of that human element, which [could mean] including a hand in the photo, top down, and you get the sense that you could be dining in that scene.”

While so much food photography is meant to show off the food, Stumpf’s work, though varied between projects, is united in that each shot shows off the experience of eating that food, or dining in that space. That sensibility came naturally to Stumpf, who started her career as a journalist after receiving a degree in photojournalism from the University of Montana. After life in Missoula began to grate — “you think Boulder’s a bubble…” Stumpf says — she sailed off to Costa Rica for a stint in the Peace Corps. There, she was able to use photography to tell other people’s stories.

“I did a women’s photo voice workshop, meeting with women in the community and kind of giving them the basics of photography and teaching them how to tell their story through photographs,” Stumpf says. “It was really cool to see what these women photographed and what was a part of their daily life.”

After the Peace Corps, Stumpf came to Boulder and, via a marketing internship at Alfalfa’s Market, realized the breadth of Boulder County’s food scene. So many local producers sold into the store, she thought. Stumpf, who grew up in a house that celebrated food and had dinner at the table together every night, was a born and raised foodie, and the opportunity to marry her passions of photography and food, in the unique food haven that is Boulder County, prompted her to try to make it work as a freelance photographer.

But Stumpf, who had worked mostly editorial projects, found she had a lot to learn to get into commercial and retail photography.

“There was a huge learning curve there. I knew nothing about commercial shoots,” Stumpf says with a laugh. “I remember my first really big commercial shoot was for Starbucks through an agency in Denver, and I just had no idea how to put together a commercial shoot.”

There are aspects of professional food shoots that the layman wouldn’t think of — nor did Stumpf initially. On commercial shoots, the client will provide a budget to the photographer, who then often has to source a venue, a food stylist (a person who sources and arranges the food and/or product), a prop stylist and sometimes an assistant. The photographer usually provides catering on set. Sometimes an art director for the client will provide instruction to the photographer, or a chef at a featured restaurant will prepare the food.

Making sure those details and many more were right, and learning the tricks of the trade (for instance, don’t cook food all the way for a better photo), was a prerequisite before Stumpf’s unique style could take form.

“In the beginning, I would go into shoots just trying to please this one client and now I go into them with a sense of like, OK, I know what I’m doing and they’re hiring me for my vision, so I feel like I have the freedom to throw my creativity into the shoot,” Stumpf says.

Her creativity, so to speak, often leads to photos that feature food in the act of being eaten, and the artful framing of shots that make the viewer feel present. That comes from the inherent value Stumpf places on dining.

“I think that I try to create that feeling that food is communal,” she says. “Whether enjoying it together or growing it together, I just think it’s so easy to connect over food and drink.”

Which brings us back to social media. With more than 236 million photos with the hashtag #food on Instagram, which allows users to easily edit pictures into decent-looking photos (like Auto-Tune for singers), clearly food brings folks together on the internet. One might think the days of food photographers are over given the saturation of content. But Stumpf says the industry has largely recognized the value that professionals bring, even if it requires trial and error.

“I think social media has kind of made photography seem accessible to everyone like, ‘Oh, I can do it,’ and I think probably clients or people that think that and maybe go lower budget sometimes can be disappointed,” she says.

Instagram hasn’t just made publishing photography accessible to everyone with a smart phone, it’s made the profits to be had from photography available to them as well. Commonplace now are Instagram users who create a persona, or a brand of themselves, and stealthily integrate products into their photos in exchange for money. It blurs the line between what consumers have come to recognize as content and advertising.

“It just feels corporate and gross and cheap and not really, I don’t know… wholesome storytelling,” Stumpf says. “It does take the art out of it. I think that’s what social media has done with photography and just content in general; it’s sort of just cheapened it a little bit.”

Seeing that the cheapening of art has also taken place in schools across the country, either from lack of funding or a shift to a focus on science and technology, Stumpf continues to use her knowledge of photography as a tool for social change. While in the Peace Corps, she gave cameras to fourth and fifth graders for a photo project that was hosted online. Now, she takes a group of high school students abroad each summer with National Geographic on photography excursions.

“When I hear about arts programs being cut, it just breaks my heart because it’s so important,” Stumpf says. “It’s so important for kids to develop that part of their brain.”

Too, Stumpf says her favorite locations to shoot are farms, because the success of the food infrastructure relies on them. To be a foodie nowadays, Stumpf acknowledges one has to not only enjoy the fruits of the culinary world but respect and sustain the avenues from which they came.

It also takes a lot to sustain a freelance career. Stumpf says she’s living out the goals she set for herself years ago, and simply continuing to find time (and the means) to pursue her photography and social work is the new daily goal.

To see more of Stumpf’s work, visit www.rebeccastumpf.com. Listen below for more of our conversation.