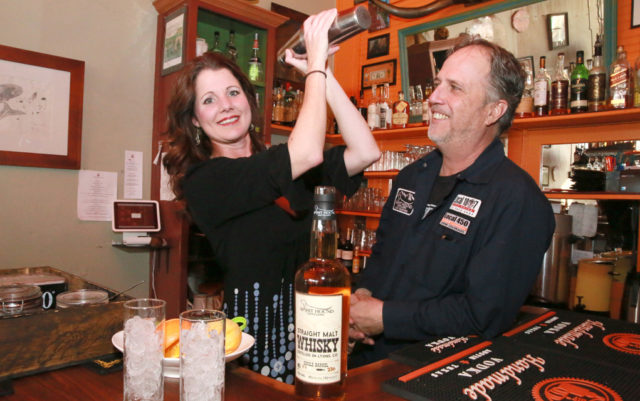 When the thousand-year flood hit Boulder County in 2013, the Lyons Fork was not spared. Water gushed in through the back door and filled the restaurant’s basement with four feet of runoff.

“Ugh,” owner Debbie Anderson says. “It was a mess.”

“It was like a river going across the road,” says her husband and business partner, Wayne, pointing out to Main Street.

The Andersons didn’t have flood insurance, but then again, they weren’t in the flood plain so they didn’t think they’d need it. And so the flood ravaged all their equipment and furnishings in the basement. They had to (literally) eat the shipment of food that came in that week. Yet, Debbie says, it could’ve been worse. A fault in the centuries-old building funneled water away from the main floor.

“There’s this lip as you go back to the bathroom that drives me crazy,” Debbie says. “It slopes down when you go to the bathroom, and I always think somebody’s going to fall, but that’s what saved [the restaurant’s main floor], because it was raised just enough.”

It was only the latest instance in a long life of serendipity for Debbie and Wayne. It was a perfectly timed meeting that led the two, who had never owned a restaurant, to purchase the building that would become Lyons Fork in the first place.

They were living in Lyons and had recently become jobless. But they bumped into the owner of the historic building on the corner of Main and Highway 36, and “next thing you know the ball’s rolling down the street,” Debbie says.

“The building itself, the location, to me it’s always been the best spot in town,” Wayne says. “It would be like, that sucks they’re not doing anything with it. We just met the owner at the right time and everything fell into place quickly. It wasn’t so much about owning a restaurant as much as, how cool is that place? What could we do with that place?”

And the place is cool. Lyons was founded in 1880, and the building was erected in 1881, originally platted as a saloon. It comes with it’s own legend of a shoot-out and the bullet hole to prove it. It had been a half-hearted restaurant with irregular hours before the Andersons took over, but in a short time, they made it into one of the premier dining destinations in Boulder County, anchored by a homespun atmosphere, local ingredients and craft beer and spirits.

The dip in the floor was fortuitous, but it was almost like the building preserving itself. The business, however, needed some help after the flood, and in the six months they were closed, Debbie doesn’t remember how they made ends meet. Eventually, word got around and members of the community rallied to help raise funds for the cleanup and purchase of new equipment and food. It was an affirmation that the risk they’d taken was appreciated in the community. 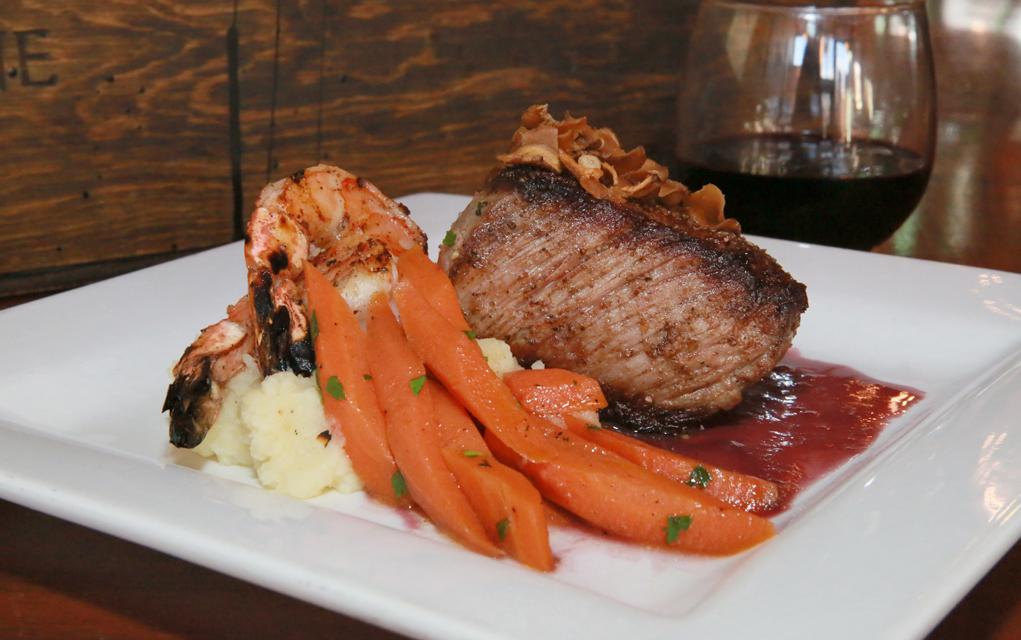 Debbie says there were conventional jobs they could’ve taken besides buying a building and opening a restaurant, but the “safe” play isn’t in either of their natures.

“It seems like I’ve always been in entrepreneur mode,” Wayne says. “I don’t know why I do that to myself.”

Probably because the risks have paid off so far. Wayne moved from Georgia to Boulder in 1990, then to Lyons in 1996. He climbed the ladder at Oskar Blues as the company rapidly grew. He also moonlighted as a caretaker on a 120-acre farm, despite having never worked on a farm before.

“He almost burned down a couple houses,” Debbie says.

“Pissed off a few neighbors more than once,” Wayne adds.

Yet, again, it worked out. Nowadays, the Andersons have been able to grow produce on the farm that makes its way into the restaurant. They also raise pigs, which sometimes end up on their menu one way or another.

Debbie hadn’t worked on a farm either when she met Wayne. She grew up in Texas and moved to San Diego because she fell in love with the area on a visit and “figured you’re only young once.” She eventually got a job overseeing distribution in Southern California for Stone Brewing. Isn’t it serendipitous then that as Oskar Blues transformed the industry by canning craft beer, the company happened to send Wayne out to meet Debbie to discuss Stone distributing Oskar Blues’ beer?

“She had a great sales pitch,” Wayne says. “I bought the whole thing.”

“Well, I’m the one who bought the farm,” Debbie says.

Thus, Debbie moved to Lyons. They had two kids, and eventually came across the Lyons Fork opportunity. But given their lives of constant reinvention, it was only a matter of time before they had their hands in another pursuit. Three years after opening the restaurant, the Andersons became one-fourth owners of Spirit Hound Distillers in Lyons.

After that, “I had to cut you off,” Debbie says to Wayne. “No more babies. Any babies.”

But again, it worked out. The flood inundated much of the Spirit Hound facility, but they had been previously required to purchase flood insurance on the property. Little of their product was ruined, and they were partly reimbursed for damages. And as fortune would have it, the pigs on the Anderson farm like to eat the spent whiskey grain from Spirit Hound, as well as the refuse from the Fork and other restaurants in Lyons.

It’s been said that people shouldn’t work with family. And certainly one would assume that extends to the Andersons, whose pursuits in entrepreneurship come with a unique set of risks and stressors. But they’ve at least started to carve out a groove that enables them to work together efficiently.

“We’ve been trying to figure that one out for the last 10 years,” Wayne says. “One hard thing being in business together is you don’t get to go home from work. We go home and talk about the stresses of work, so we’ve been trying hard to not do that as much.”

Wayne says he spends much of his time at Spirit Hound, while Debbie operates Lyons Fork.

“She’s the boss, and she calls me when something’s broken or she needs me,” Wayne says.

And so it’s natural to wonder what the next big venture the Andersons will undertake. Wayne says they’re in a good spot now — an acclaimed restaurant, a growing distillery and a manageable farm, their kids able to walk down a dirt road to school. But for all that talk, the evidence suggests stasis is not their style.