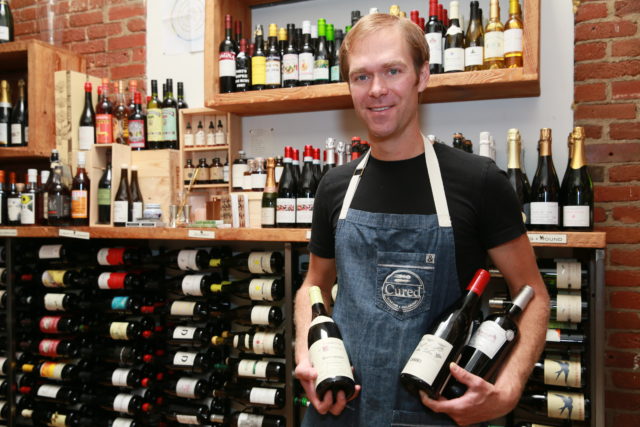 Will Frischkorn saw much as a professional cyclist, churning at 30 mph through Europe and North America’s best culinary and historic destinations in a sea of Lycra. He wasn’t able to enjoy much of it.

“You race around and you look and up and say, ‘This is insane,’” Frischkorn says. “But then your head’s down, you’re slaughtering yourself and then you finish and get on the bus and get a massage and go to bed, and it’s like, ‘Huh, I didn’t do anything. … Can we just put this all on pause and check this out for even just a day?’”

That desire for more inspired Frischkorn to eventually return to Boulder and open Cured, an artisan cheese, charcuterie and wine shop on East Pearl. Since, Frischkorn and his team have opened a second location and launched catering operations.

But it’s been a long ride, going from mountain biking as a kid in West Virginia, to placing second in one 2008 Tour de France stage, to operating an artisanal mini-empire. Frischkorn, however, is unequivocal about what’s been the most difficult part of the journey.

“Way harder to be a small business owner,” he says. “Back then, cycling was so easy. You got to ride your bike and hang out in cool places, and you get paid pretty well. You’ll never suffer in an acute moment as much in business as [you would] groveling over a mountain pass, but [here it’s] seven days in a row, like 70 hours of standing, and then hours of computer work on either side of it.”

Frischkorn grew up in a family that celebrated food, but cycling, he says, “injected travel and allowed me to see where it happens.”

The nature of professional cycling, which involves a short period of intense physical work every day followed by hours of down time, allowed Frischkorn to educate himself on the areas in which he was racing or training. He rummaged through books and websites, as he often wasn’t allowed (either by his trainers or from fatigue) to go out and experience the scenes.

Frischkorn recalls attending a race in Milan when his wife, Coral, pointed out he’d been in the city more than most people ever will, yet had never seen the famous Duomo.

“So she dragged me out of the hotel and got a taxi, and we went and walked around,” he says. “I had a coffee, and we got back to the hotel and one of the directors was like, ‘What did you just do?’”

On the professional circuit, cyclists are highly regulated not only in their activities (Frischkorn says he couldn’t carry groceries because it would bulk up his arms), but in their diets. Nothing reminds you more that food is fuel than long-distance cycling, which makes you wonder how one develops a healthy relationship with food — and a passion for it — when their diet is micromanaged and the romance of cuisine is stricken.

But Frischkorn says he “probably enjoyed food a little more” than other pro cyclists, and even sneaked glasses of wine while competing in the Tour. In fact, it was that strict dietary oversight that ultimately prompted Frischkorn to reconsider his career.

“Food is one of those things that I love too much to not be able to enjoy it in the way that I want to,” he says.

Frischkorn could’ve kept competing professionally for another six or seven years, he estimates, but figuring he’d “never be one of the top guys,” he and Coral decided to get a jump-start on the next phase of their lives.

So Frischkorn transitioned into a hospitality role in Spain with the team for whom he cycled, escorting high-end sponsors to various locations during races. Making Barcelona home, Frischkorn finally experienced the hands-on education in food and drink he had to eschew while racing, taking advantage of cheap flights and trains to jet off to Austria, Morocco or points in between.

The style of life in Barcelona also inspired the initial plans for what Cured would become, Frischkorn says.

“You never did a big grocery shop; you grabbed what you wanted for your meals,” he says. “We had three little markets that were kind of like [Cured] nearby. We developed relationships with the shopkeepers there … and that style of shopping really took us.”

Seeking a space that was the right size in Boulder, Cured teamed with Boxcar Roasters, who also happened to be looking for a retail shop at the time, and whose product (craft coffee) aligned with Cured’s proposed offerings.

They ran into the immediate challenge of sourcing unique products that would sell before they perished. Frischkorn says it’s been a learning process but they’ve got it (mostly) figured out by now. Cured issues almost 100 checks every week to vendors that, for the most part, Frischkorn or a team member have visited on scouting trips. Frischkorn says he sees himself as a middleman between the small producer and the consumer, serving as the storyteller for the products and their makers.

Deciding what makes it in the shop is a mix of personal taste and market trends (as is opening shops — when Twitter moved their offices from East to West Pearl and employees complained they were no longer able to run down for a sandwich, Frischkorn opened Cured West). Frischkorn says one rule of bringing in products is that if the staff would be excited to take it home and eat it if it doesn’t sell, then it’s worth stocking. Like, bottarga or cured fish roe, for instance.

“We want bottarga, and we think it’s cool, but that’s something that so few people know what to do with it that we end up taking a lot of it home,” he says. “But what we can play with now is so different from what we could play with when we opened.”

Being small allows Cured to rotate stock — they may not have an Italian vermentino for those looking for one, but they can recommend a hearty and fruity Corsican one, with booming Island strains of Italian and French grapes, for instance.

Bringing unique flavors back from abroad is also the goal of the shop’s “Cured de France” program. With the Tour entering its third week, Cured is offering packages of rare wines, beers and cheeses from the regions in which the race is running. The program is a microcosm of Cured’s approach to food: sourcing high-quality, small-farm products on a rotating basis. It also happens to tell the story of Frischkorn himself, that the two things to which he’s committed his career (cycling and food) work in harmony, and he’s happy he can share that with others.

To listen to more of the conversation with Will, listen in the box below.