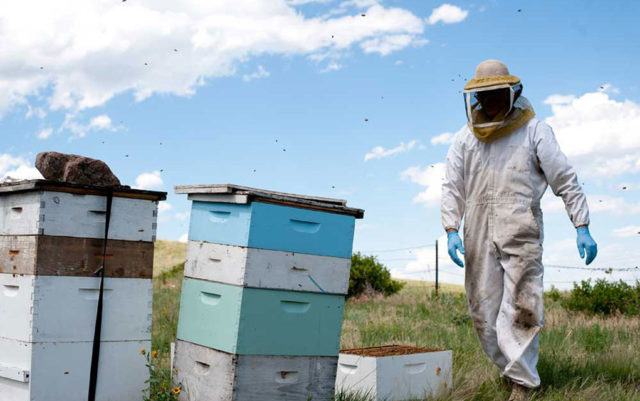 Einstein supposedly once said that mankind would only have four years left on the planet if bees were to go extinct. The logic is that because bees are so integral to the process of pollinating plants, eliminating them would eliminate the animals that eat those plants and would thus have ramifications up the food chain — all the way to us.

We don’t know if Einstein ever said that. We do know that’s a monstrously ominous thing to drop on humanity if he did, considering he left no blueprint for how to avoid the extinction of bees and cultivate their communities.

Luckily, though, we have Tim Brod.

Brod has been keeping bees in Boulder County for more than four decades, and his company, Highland Honey (based in Longmont), is one of the few small-scale producers of artisanal, truly raw honey. His knowledge of honey, bees and agriculture is, indeed, Einsteinian, and is surpassed only by his passion for cultivating bees.

It’s ironic, then, that Brod says learning to care for bees requires a bit of savagery.

“The truth is I’ve killed more goddamn bees than anyone you know. I am Mr. Death. I have been honed in the fires of bee hell,” Brod says. “And it sucks. Everyone who’s involved in this, if we can keep 60 percent of our livestock alive, we’re doing well.”

Brod rotates his bees throughout the county to places where they can forage — open space, farms and private property. He knows, better than anyone, the state of bees in Boulder County and — if we’re to believe someone that’s potentially Einstein — by extension humanity.

“The truth is it’s really hard to keep bees alive here anymore, and I don’t think anyone will really be able to keep bees going here on a commercial level in the future,” Brod says. “I think if you spent eight years learning, you can have bees in your backyard, and you can get 18-25 pounds of honey if you’re lucky. … In terms of doing it as a viable business — as an integral part of our community, of our agricultural system — that is dying for bees here. I’m one of the few people left. It will be dead soon; it will not be possible, because we don’t have the forage.”

Brod says there is a “constellation” of factors that have contributed to the decline of bee populations. The foremost factor, Brod says, is the reduction of food sources, or forage. Brod blames land use policies that limit bees’ ability to access nectar and pollen; open space may be great for grazing cattle or running trails, but it’s low in the wild forage needed for bee pollination. Insects can’t live on grass, Brod says. Then there’s urban densification, which physically replaces forage areas with concrete and non-bee-friendly plants. This reduction of habitat creates monocultures, wherein bees have to be shipped onto farms in order to pollinate plants where forage and natural bee communities have long been removed.

But Brod says the biggest factor in bee colony declines is — bad news, again — us.

“I think the decline of the honeybee can be tracked to the decline of the dandelion and because we have that social pressure to get rid of [it], to destroy [it], let’s treat it as bad. We’ve started demonizing certain types of diversity. We’ve demonized a lot of things at the expense of our souls as well as our habitat,” Brod says.

Killing dandelions not only removes a food source for honeybees, Brod says, but it also often involves the use of pesticides, which impact the overall health of bee colonies.

Brod is not sugar-coating this, if that’s not clear already. We’re in a bad position. And he compares the despair some people might feel about enacting minor changes to how disenchanted voters might feel come election time — their small actions don’t matter. But what other choice do we have?

“Changing our habits and changing our landscape is a process. It’s not just a blink of the eye,” Brod says. “I think us collectively throwing pebbles into this pool called humanity, habitat diversity, every little bit helps because it’s infectious. Doing good deeds, taking care of things is infectious. It’s critical. Will you in your backyard, planting a 10-by-2-foot strip [of forage], you’ve got 30 or 40 sunflowers, you’ve got some sage and raspberries and mint… is that unto itself enough to support a hive? No. Is it enough to support some native bees? Yes. But imagine if the whole fucking neighborhood did that. And then the next neighborhood. And then most of the city.”

In order to make those changes, however, the public perception of bees and honey needs to change.

Bees have been turned into a commodity, Brod says, and our taste buds have grown desensitized to poorly made honey. Brod makes unheated, unfiltered, raw honey — that means the honey never gets above 95 degrees, the natural temperature in a beehive. Larger-scale producers of honey will heat it to up to 165 degrees and filter it to prevent crystallization (or hardening), which not only removes much of the flavor (requiring additional sweetener), but much of the nutritional benefits of honey. Brod uses a “creaming” process, which controls the natural crystallization process by making many smaller crystals, which have a pleasant texture.

But this time, it’s not really our fault that we’ve lost the taste for honey, Brod says. The industrial food system, yet again, has worked to confuse consumers about the health benefits of mass-produced, as opposed to smaller scale, products.

“We have zero oversight in the world of honey as to what the words ‘raw, unheated, unfiltered’ mean. You can go into Whole Foods or Walmart, and you can buy a jug of honey that has the exact same words on it, and one costs X and one costs Z, and you as a consumer have no idea which one is better for you.”

Honey may be one — perhaps the best, or at least the most delicious — way we can start to be better stewards of bee communities. Brod says when people try his honey at, say, the Boulder Farmers Market, they’re either shocked to taste something so complex, or reminded of some long-lost ancestor’s home production. If we value good honey, we’ll value the honeybee, and maybe we’ll even save humanity along the way.

But it requires a clear-headed assessment of where we are, and a bit of honesty.

“We’re in a serious crisis with pollinators, and honey and bees have risen up as the benchmark for people’s fear,” Brod says. “Whether you’re Republican, Libertarian, Green Party or a Democrat, the vast majority of all of us know we’re screwed in terms of sustainability. Bees and honey are emblematic of the hope that maybe we’re not: ‘They’re still here, I can still buy cheap honey. Detroit did not crash, and gas doesn’t cost $4.’ It’s just subterfuge.”